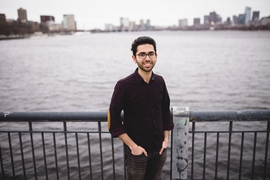 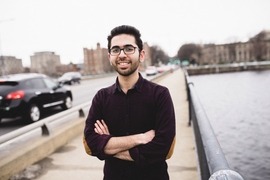 When Mehmet Efe Akengin first entered MIT, he intended to continue his internationally acclaimed mathematics career. The native of Istanbul, Turkey, was one of the country’s youngest gold medalists in the International Mathematical Olympiad (IMO), an annual mathematics competition for high school students. With four medals to his name, Akengin is still listed in the IMO Hall of Fame.

But Akengin didn’t only compete: “I was really interested in how I could be helpful and useful with my skills,” he says, describing how he trained and mentored young competitors around Turkey.

Akengin brought that commitment to helping others with him to MIT. After sitting in on 6.00 (Introduction to Computer Science and Programming) and taking 6.148 (Web Development: Class and Competition), Akengin found his niche. He’d discovered his affinity for using entrepreneurship to share technologies that benefit society.

“MIT just changed the ways in which I think about the world in a very revolutionary way,” Akengin says. “It really got me interested in applying my experience with starting from first principles and coming up with creative solutions, and using that to build projects and bring ideas to life in a short amount of time so they can be scalable and impactful for people.”

During the fall semester of his junior year, Akengin, who double majors in computer science and political science, joined Drones for Humanity, a startup company founded by fellow MIT undergraduate Mohammed Nasir. Akengin works as the chief product officer for the startup, which aims to develop novel drones for humanitarian work around the world. The company’s drones are custom-built to deliver heavy payloads of aid over long distances to hard-to-access regions.

“We decided to test drones in Indonesia to see if we could deliver humanitarian aid between islands,” Akengin recalls. Before the field tests, Drones for Humanity received over $60,000 in funding and mentorship support from the MIT Sandbox Innovation Fund, the IDEAS Global Challenge, and MIT fuse, as well as MIT alumni.

The field tests also gave Akengin firsthand experience with technology management in different countries. During testing, he realized that recently passed laws in the country and financial trade-offs for the product-market fit would make Drones for Humanity operations there unsustainable — so the company needed to pivot. Now, the company is working on a potential partnership in Kenya.

“I think this is the thing with entrepreneurship,” Akengin says with a chuckle. “You try one thing, and if it doesn’t work, you try other things.”

Akengin joined the MIT Muslim Students’ Association (MSA) during his first year at the Institute and has remained an active member of the community over the past four years. During his sophomore year, Akengin was elected president of the faith-based student group, which he estimates has over 200 active members and 20 executive board members.

“The Muslim Students’ Association is probably one of the most diverse student groups on campus, with representation from at least a dozen different communities,” Akengin says. “The community itself has a lot of potential to use the MIT education to solve problems like the refugee crisis, problems happening in the Middle East, South Asia, North Africa — where [members] can understand the context they live in to create solutions.”

Akengin sought to empower members to apply their educations to address challenges in the Muslim world. His efforts included a combination of mentoring, increasing accessibility of spiritual resources, and organizing collaborative discussion events.

During his junior year, Akengin spearheaded efforts to hire MIT’s first institutionally funded Muslim chaplain, Nada Al-Alami, so that students had someone to turn to for spiritual guidance and support.

“It’s a very exciting project that will empower the community a lot,” Akengin says. “[BISA] is for undergraduates and young professionals around Boston to come and discuss and learn from the top scholars in the area about how they can create value in their own MSAs and build their communities.”

For his efforts as president of the MIT MSA, Akengin earned the MIT Golden Beaver Award in 2017. The MSA earned the MLK Leadership Award for its service to the community as well in the same year.

Akengin is also involved with Nav Talent, a company that takes a highly personalized approach to connecting graduating engineering students with select job opportunities. Akengin started and now leads the MIT branch of Nav Talent, and aims to introduce interested MIT students to “places where their work can have the most positive impact.”

By facilitating that connection, Akengin aims to tackle the “information asymmetry” that can exist between the students and high-growth employers. Often, founders of these companies seek to interview a relatively small number of highly qualified students, he says, whereas students want to learn as much as they can about an opportunity before starting a formal process.

Outreach teams facilitated by Akengin have one-on-one conversations with computer science undergraduates to get to know them personally and understand their ambitions, and to reach other students through word-of-mouth interactions. This approach, Akengin says, allows Nav Talent to introduce students to opportunities best suited for their peers’ career growth and passions.

Nav Talent also helps match current undergraduates with CEOs of international companies for summer internships, through their N Fellowship program, which Akengin helped design. As part of the process, Akengin took part in the program as an N Fellow himself last summer. He worked closely with the CEO of Energy From Waste in Helmstedt, Germany, and built the company’s first big-data management strategy.

Akengin, who is planning to join Nav Talent full-time, says his affinity for empowering people has grown into a passion and even shaped his career goals during his time at MIT, an evolution that began with his international student orientation. “I talked to President Reif when he was greeting the incoming students, and I asked him for one piece of advice [for a student starting at MIT],” Akengin says.

“He said something like, ‘You know what? You work hard and you do a lot of things but you should be humble enough to realize that at the end of the day, you are also lucky.’ And I think what he meant was that I was lucky to be at MIT, and that I should make use of it,” Akengin says. “I need to help others take advantage of their luck in being here, and to give them resources so that they can do the things they want to do.”