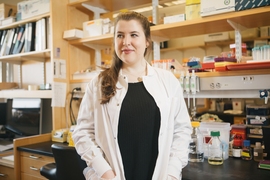 Caption:
MIT senior Isabella Pecorari embarked on a path to medicine at a young age, beginning with a grade-school fascination with biology.
Credits:
Image: Jake Belcher

MIT senior Isabella Pecorari embarked on a path to medicine at a young age, beginning with a grade-school fascination with biology.

“I could not get enough,” Pecorari says, recalling how she used to stay after her biology class and ask questions from lists she wrote. “It was ridiculous. There was just no stopping me!”

Since the sixth grade, Pecorari has intended to develop her interest in biology to help others in a medical setting. When it came time to attend college, she knew MIT would be a good fit. “I knew that if I was going to be premed, I wanted to have a supportive environment,” Pecorari says. “I wanted to be in a team-building setting where I could work with other students through problem sets rather than struggling alone.”

Pecorari has thrived in that environment and is now on a mission to help grow the support systems for others at MIT. As the brain and cognitive sciences major pursues a career as a physician, she aims to apply what she’s learned while helping to foster mental health and wellness in her community.

Pecorari is passionate about mental health education and providing support to fellow students in need. “People think that MIT students have everything,” Pecorari says, “but mental health is not about what you see on the outside — it's more about what's going on inside.”

“People are often afraid to come out and ask for help because there’s such a stigma around mental health issues,” she says. Now the president of Peer Ears, Pecorari hopes to destigmatize those mental health discussions in undergraduate dorms across campus. Peer Ears representatives are trained extensively by MIT mental health clinicians on how to reach out and respond to students facing mental health crises.

Under Pecorari’s leadership, the organization is creating a booklet for incoming freshman that presents information about mental health issues common to college students and the resources students can go to for help.

“It allows students who might be going through a difficult time to realize that they are not alone in the way they are feeling,” Pecorari says. She hopes the booklet will be complete in time for the incoming class of 2022.

Peer Ears also helps host dorm-wide study breaks where undergraduate students can stop by, talk to representatives, and study within a supportive atmosphere. The organization has also begun a care package program, funded by the MindHandHeart initiative, which provides food-filled care packages to students during spring final exam periods.

“We’d set up a booth in Lobby 10 where people could stop by and make a care package for themselves or a friend,” Pecorari recalls. “It was a big concern of ours that people weren’t always eating when it was a stressful time.”

The program kick-off was a success, and Peer Ears will hold another care package session at the end of this spring semester.

Pecorari also works on the executive board of MIT BrainTrust, a student-run organization in which students are paired with individuals from the greater Boston area who have survived traumatic brain injuries, for meetups throughout the year.

BrainTrust gives survivors “a buddy system — someone they can reach out to and talk to and rely on so they don’t feel alone,” Pecorari says. During her time at BrainTrust, Pecorari has invited physicians from the Boston area to host discussions during meetups, and she has curated panels discussing Alzheimer’s disease for attendees.

Pecorari is also president of Student-Alumni Association, and she previously served as a panhellenic recruitment counselor. In addition to her classes and extracurricular activities, Pecorari has been a teaching assistant for two courses: CC.5111 (Principles of Chemical Science) and 9.00 (Introduction to Psychological Science).

Pecorari’s curiosity about biology led her to begin formal research when she was a high school student, working at the Hospital for Special Surgery in New York City.

“The P.I. of the lab was at first very hesitant to bring me on board because usually you need to be at least 18 years old,” she says. “But I was persistent and I really just wanted to have the opportunity to get involved in research and see what it was all about.”

Pecorari joined the lab at 16 and was assigned tasks such as data analysis and creating presentations. When she turned 18, she began culturing cells and learning about the medicines prescribed to patients at the hospital.

These experiences primed her for the research-rich environment at MIT. During her sophomore year, Pecorari joined the lab of Institute Professor Ann Graybiel to learn how to develop microelectrodes that detect dopamine levels in animal brains. Pecorari liked the application of the work: It could be used to develop treatments for and understand the mechanisms behind Parkinson’s disease.

Currently, Pecorari works in the lab of Poitras Chair Professor of Neuroscience Guoping Feng, to develop animal models for Huntington’s disease that can be used to test possible treatments.

“It can often take months or even years to produce results you want in research,” Pecorari says. “I’m really appreciative of the opportunity to understand what goes on behind the scenes and to know that the work I’m doing today, no matter how small a part, can possibly help someone in the future. That’s what really drives me.”

Pecorari is also an avid equestrian and has been riding since her childhood. When she was 11, she began to train a 3-year-old horse. The training took intense patience and determination; when Pecorari began, the horse wasn’t even used to wearing a bridle.

“It took a full two years before I could get a ride on him,” Pecorari recalls. She began to successfully compete with the horse in local and national competitions — a testament to her hard work.

During her sophomore year of college, Pecorari decided to train another horse.

“I knew that medical school was in the future and had the sense that [training a horse] takes up so much time and commitment. I probably wouldn’t have the opportunity to do this at a later date,” Pecorari says. “So I just went for it.”

At the beginning of the summer before her junior year, Pecorari was thrown from the horse. “He threw me from his back, trampled me, and broke my back in five places,” Pecorari says, “so that summer did not turn out as expected.”

During the intensive healing process, Pecorari experienced the role of a patient, which gave her a new view on medicine.

“I gained an understanding of what it was like to go through something that’s really scary, uncertain, and painful,” she says. “Even though this was a really traumatic experience, I tried to remain optimistic and to think of the benefits that could come out of it and how I could possibly use my experience to help people.”

Pecorari intends to apply that outlook to the rest of her time at MIT and to her future in medicine, supporting others and fostering community along the way.