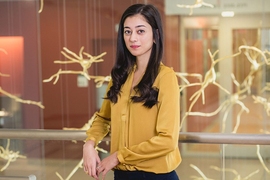 ↓ Download Image
Caption: Senior Anjali Misra, who is majoring in brain and cognitive sciences and minoring in music, is originally from Cedar Rapids, Iowa. 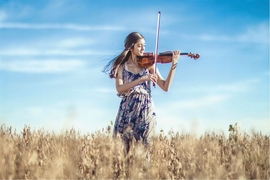 ↓ Download Image
Caption: Anjali started learning violin when she was just three years old. Sophomore year at MIT was the first time Anjali studied music academically, and she enjoyed it enough for it to lead to seven subsequent music classes, a music minor, and a research paper about jazz music published in an online journal.

Caption:
Senior Anjali Misra, who is majoring in brain and cognitive sciences and minoring in music, is originally from Cedar Rapids, Iowa.

Caption:
Anjali started learning violin when she was just three years old. Sophomore year at MIT was the first time Anjali studied music academically, and she enjoyed it enough for it to lead to seven subsequent music classes, a music minor, and a research paper about jazz music published in an online journal.

Anjali Misra spends a lot of time attending to those who need help the most. On a typical day, the MIT senior and certified emergency medical technician can be found behind the wheel of the MIT ambulance or leading training sessions in CPR and first aid across campus. So far, Misra has helped facilitate the training of more than 1,000 MIT community members.

“I like the idea of being the kind of person who can help in a crisis,” she says. “I think that getting to do something similar as a career would be ideal.”

Misra, who is majoring in brain and cognitive sciences and minoring in music, has her eyes set on medicine: “I knew for my entire life that I wanted to be a doctor. I was one of those strange kids who from 2 years old had a vision.”

That vision brought Misra from Cedar Rapids, Iowa, to Cambridge, Massachusetts, though she admits that “the idea of trying to pursue medicine at an institute of technology seemed a bit incongruous” at first. She turns to her career role model, physician and author Atul Gawande, to explain how her MIT education has been crucial to her approach to medicine.

“He said that science is a commitment to a systematic way of thinking,” she says. By approaching medicine systematically, Misra hopes to “solve problems that don’t really seem to have answers on the surface.”

She’s referring in large part to problems that span both public health and medicine: preventable diseases, which are exacerbated by disparities in access to health care. During her high school years in Cedar Rapids, Misra witnessed firsthand the inaccessibility of health care in rural communities.

When she volunteered at her local hospital, she began to notice that some of the patients visiting the emergency room suffered from chronic, unchecked medical conditions — and that the visits could have been avoided if the patients had access to regular care. “To me, that is an area for great improvement in health care,” Misra says.

To best equip herself with the tools to tackle preventable disease, Misra, a 2018 Mitchell Scholar, will pursue a master’s degree in public health at University College Cork in Ireland before returning to the U.S. to pursue medicine.

“Having a chance to see how a different country addresses similar [public health] problems,” she says, “hopefully sets me up to keep an open mind as I try to pursue all of these things in my own career.”

Before she began her freshman year, Misra took part in the Freshman Urban Program (FUP), a weeklong pre-orientation program that focuses on social justice and volunteering. Program topics have spanned hunger, education, race and gender, and sexual identity. “The counselors take the students to community organizations in Boston and Cambridge to do a morning of service, and the idea is that these organizations do work related to the topic of the day,” she says. “Then, in the afternoon, everybody returns to campus and the counselors facilitate a group activity that stimulates conversation on these topics.”

“For me, that was a perfect way to start my experience at MIT,” Misra says. “I think it really set me on a path to considering service as essential and not as something that I was going to incorporate into my life when I had a free week.”

Misra liked the experience so much that she worked as a counselor for the program in each subsequent school year. Her senior year, she helped organize the program as a co-coordinator. “It was always something that I was going to start with and something I intend to end with. And I always wanted to be there in the middle, too,” she says.

With a similar level of commitment, since her freshman year Misra has also been actively involved in SHINE for Girls, a weekly after-school program that combines math tutoring and dance. “The premise of this program is to combine something that a lot of girls enjoy, dance, with something that is challenging in order to increase their confidence and reframe the topic,” she says. Now, Misra is co-president of the mentorship program, and she hopes to help the current mentees find role models who are women in STEM.

The summer before her senior year, Misra was named an MIT Priscilla King Gray Public Service Center Fellow. During her fellowship, she worked with the Family Van, a Harvard Medical School program that brings mobile health care to underserved communities. Misra was stationed in East Boston to screen members of the community for preventable diseases.

“What seems extremely strange to some people is the idea of providing health care out of a repurposed bus or a van or a train,” Misra says. “But it is actually doing a lot of good in the community in a way that traditional clinics have been unable to achieve.”

That summer, Misra also worked on research for the Mobile Health Map, a collaborative network that aggregates data on successes and challenges across many different mobile health clinics. Together, these experiences opened her eyes to the public health challenges in mobile health care.

“One thing I struggle with a lot as a scientist and as an idealist is knowing that having the solution is not all it takes to solve the problem,” Misra says. “It wasn’t enough to just drive out into the community and be extremely accessible to people. … There was a second tier of challenges that appeared.” Those challenges included getting community members to come inside the van and take part in the free screenings offered.

By combining an education in public health with one in medicine, Misra hopes to tackle some of those challenges, to maximize the effectiveness of preventative care. Despite some of the difficulties, Misra still sees great potential for mobile medicine.

“Many lives are going to be saved or should be saved in the future by taking advantage of this knowledge that we already have, and just by making it accessible and actually useful to the people who we are hoping to impact,” Misra says.

She hopes to use her undergraduate and graduate education to become an effective physician who helps improve her patients’ lives. “As soon as I become comfortable [as a practicing physician], then I can start to incorporate advocacy from a really early part of my career,” she says. “I don’t want to wait until the very end to do that.”

Misra has served as co-president of the MIT South Asian Association of Students after joining as a freshman representative. She also takes part in medical research elucidating the function and role of primary cilia under the supervision of Peter Czarnecki, in the Shah Lab of the Harvard Medical School. Misra was also a presenter for the MIT Women’s Initiative and has presented about careers in STEM to approximately 1,500 female middle school students in Union Country, North Carolina, and she was a recipient of the 2017 McKinsey Undergraduate Women’s Impact Award.

Through dance, program turns "I can't" into "I can"