Team invents method to shrink objects to the nanoscale

It’s not quite the Ant-Man suit, but the system produces 3-D structures one thousandth the size of the originals.
Anne Trafton | MIT News Office
Publication Date:
Press Inquiries 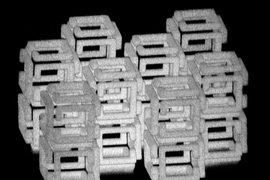 ↓ Download Image
Caption: MIT engineers have devised a way to create 3-D nanoscale objects by patterning a larger structure with a laser and then shrinking it. This image shows a complex structure prior to shrinking.
Credits: Image: Daniel Oran 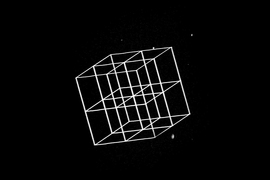 Caption:
MIT engineers have devised a way to create 3-D nanoscale objects by patterning a larger structure with a laser and then shrinking it. This image shows a complex structure prior to shrinking.
Credits:
Image: Daniel Oran

MIT researchers have invented a way to fabricate nanoscale 3-D objects of nearly any shape. They can also pattern the objects with a variety of useful materials, including metals, quantum dots, and DNA.

“It’s a way of putting nearly any kind of material into a 3-D pattern with nanoscale precision,” says Edward Boyden, the Y. Eva Tan Professor in Neurotechnology and an associate professor of biological engineering and of brain and cognitive sciences at MIT.

Using the new technique, the researchers can create any shape and structure they want by patterning a polymer scaffold with a laser. After attaching other useful materials to the scaffold, they shrink it, generating structures one thousandth the volume of the original.

These tiny structures could have applications in many fields, from optics to medicine to robotics, the researchers say. The technique uses equipment that many biology and materials science labs already have, making it widely accessible for researchers who want to try it.

Boyden, who is also a member of MIT’s Media Lab, McGovern Institute for Brain Research, and Koch Institute for Integrative Cancer Research, is one of the senior authors of the paper, which appears in the Dec. 13 issue of Science. The other senior author is Adam Marblestone, a Media Lab research affiliate, and the paper’s lead authors are graduate students Daniel Oran and Samuel Rodriques.

Existing techniques for creating nanostructures are limited in what they can accomplish. Etching patterns onto a surface with light can produce 2-D nanostructures but doesn’t work for 3-D structures. It is possible to make 3-D nanostructures by gradually adding layers on top of each other, but this process is slow and challenging. And, while methods exist that can directly 3-D print nanoscale objects, they are restricted to specialized materials like polymers and plastics, which lack the functional properties necessary for many applications. Furthermore, they can only generate self-supporting structures. (The technique can yield a solid pyramid, for example, but not a linked chain or a hollow sphere.)

To overcome these limitations, Boyden and his students decided to adapt a technique that his lab developed a few years ago for high-resolution imaging of brain tissue. This technique, known as expansion microscopy, involves embedding tissue into a hydrogel and then expanding it, allowing for high resolution imaging with a regular microscope. Hundreds of research groups in biology and medicine are now using expansion microscopy, since it enables 3-D visualization of cells and tissues with ordinary hardware.

By reversing this process, the researchers found that they could create large-scale objects embedded in expanded hydrogels and then shrink them to the nanoscale, an approach that they call “implosion fabrication.”

As they did for expansion microscopy, the researchers used a very absorbent material made of polyacrylate, commonly found in diapers, as the scaffold for their nanofabrication process. The scaffold is bathed in a solution that contains molecules of fluorescein, which attach to the scaffold when they are activated by laser light.

“It’s a bit like film photography — a latent image is formed by exposing a sensitive material in a gel to light. Then, you can develop that latent image into a real image by attaching another material, silver, afterwards. In this way implosion fabrication can create all sorts of structures, including gradients, unconnected structures, and multimaterial patterns,” Oran says.

Once the desired molecules are attached in the right locations, the researchers shrink the entire structure by adding an acid. The acid blocks the negative charges in the polyacrylate gel so that they no longer repel each other, causing the gel to contract. Using this technique, the researchers can shrink the objects 10-fold in each dimension (for an overall 1,000-fold reduction in volume). This ability to shrink not only allows for increased resolution, but also makes it possible to assemble materials in a low-density scaffold. This enables easy access for modification, and later the material becomes a dense solid when it is shrunk.

“People have been trying to invent better equipment to make smaller nanomaterials for years, but we realized that if you just use existing systems and embed your materials in this gel, you can shrink them down to the nanoscale, without distorting the patterns,” Rodriques says.

The MIT team is now exploring potential applications for this technology, and they anticipate that some of the earliest applications might be in optics — for example, making specialized lenses that could be used to study the fundamental properties of light. This technique might also allow for the fabrication of smaller, better lenses for applications such as cell phone cameras, microscopes, or endoscopes, the researchers say. Farther in the future, the researchers say that this approach could be used to build nanoscale electronics or robots.

“There are all kinds of things you can do with this,” Boyden says. “Democratizing nanofabrication could open up frontiers we can’t yet imagine.”

Many research labs are already stocked with the equipment required for this kind of fabrication. “With a laser you can already find in many biology labs, you can scan a pattern, then deposit metals, semiconductors, or DNA, and then shrink it down,” Boyden says.

Boston Globe reporter Martin Finucane writes that MIT researchers have developed a new way to fabricate tiny objects. “The researchers are currently able to create objects that are around 1 cubic millimeter, with features as small as 50 nanometers,” Finucane explains. “The tiny structures could be useful in fields from optics to medicine to robotics.”

Popular Mechanics reporter David Grossman writes about a new fabrication technique developed by MIT researchers that allows for regular-sized objects to be shrunk down to the nanoscale. Grossman explains that the new method, “takes a technique currently used to make images of brain tissue larger and reverses it.”

MIT researchers have developed a new technique that can shrink objects to the nanoscale using a laser, reports Lauren Kent for CNN. Kent explains that the technology “could be applied to anything from developing smaller microscope and cell phone lenses to creating tiny robots that improve everyday life.”

Inside Science reporter Yuen Yiu writes that MIT researchers have developed a new technique for producing nanoscale structures using a 3-D printing method that shrinks objects. Yiu explains that the new technique operates by “first creating a bigger structure inside of a gel, then shrinking the gel, which brings the structure down to one-thousandth the volume of the original.”

MIT researchers have developed a new method to shrink 3-D printed objects, reports Douglas Heaven for New Scientist. The technique can be used to create a wide variety of shapes using different materials. “In the 1970s hobbyists built their own computers at home,” explains Prof. Edward Boyden. “Maybe people can now make their own chips.”