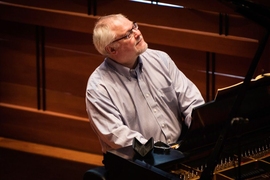 For his latest recording, pianist David Deveau has drawn on works old and new. Deveau is a senior lecturer in MIT’s program in music and theater arts, and an internationally acclaimed performer. His latest album, released today by the Steinway and Sons label, features four pieces, including a Beethoven piano concerto for which composer John Harbison, Institute Professor at MIT, wrote new cadenzas, or extended solo parts for the piano. The recording, titled “Beethoven, Mozart, Harbison,” also features a Mozart piano concerto, as well as Harbison’s own “Anniversary Waltz,” and Mozart’s “Fantasia in C Minor.” MIT News spoke with Deveau, a 2014 recipient of the SHASS Levitan Award for Excellence in Teaching, about his new work.

Q: What was the genesis of this recording — and what made you decide to link these concertos together?

A: In recent years, I have been focusing more on recording projects. Live performances and playing for audiences have been my bread and butter for five decades, but at this point in my life, I’d like to record the music that is especially central to my career, and that I especially love. I’ve performed the Beethoven G major concerto more than any other — with orchestras including the San Francisco Symphony and the Minnesota Orchestra, among many others. For this recording, since there are dozens of extant recordings of this Beethoven, I wanted to offer something different. The chamber version, whose authorship is not historically certain, is typical of arrangements of concerti for reduced forces. Since there were no recordings or radio available in the early 19th century, people became familiar with music by playing it at home or in small gatherings. Composers (or their assistants) would make versions of major orchestral works for small ensembles.

In the case of the Mozart, which is a relatively recent addition to my repertoire, all of his first 14 piano concerti can be played by piano with string quartet, or “a quattro,” since any parts for wind instruments are simply doubling the string parts. (However, in his 15th through 27th concerti, the wind parts are independent.) I have taken the liberty of adding the double bass to both ensembles, as it provides a wonderfully rich tonal and harmonic foundation.

Q: What is it about these concertos, separately or together, that you find most compelling? And what is most challenging about playing them?

A: Where to begin? They are remarkably different and yet share some characteristics. The Mozart is an effervescent and sunny piece from start to finish, with a central slow movement that is poetry in motion. It practically bubbles up with joyful, good spirits in the outer movements. The Beethoven is a more emotionally complex work. It has almost none of his usual middle-period heroics or drama, but rather an Apollonian lyricism in the first movement and a scherzando vivaciousness in the third. The brief second movement is a study in great contrasts: The orchestra begins with an angry, terse motive in bare octaves which the piano answers quietly and plaintively. This dialogue continues, with the quiet piano finally subduing the strings to a state of mystery and uncertainty, with both soloist and ensemble arriving at a hushed pianissimo. These two works contain brilliant writing for the solo piano, but they seem less about “solo vs. ensemble” and more about the joy in making music together.

Each work presents its own challenges. From a purely technical perspective, the Beethoven is more demanding, and its expressive properties are more varied. But the Mozart requires an uncommon degree of nuance and subtlety. Actually, both pieces do.

Q: MIT composer John Harbison first told you about the reduced version of the Beethoven 4th piano concerto, and his “Anniversary Waltz” is part of this recording. Could you characterize your thoughts about Harbison’s work and how it relates to your own musical vision?

A: Yes, I owe John a great deal of gratitude. Way back in 2002 he mentioned this chamber version of the Beethoven to me in passing, casually saying, “And it even has some different notes in the solo part.” I was intrigued and obtained the score from a musicologist in Bonn. (It was not yet in print but is now published by Barenreiter.) The piano part was indeed much more ornate than the usual version, which to me seemed bizarre, as the chamber version shouldn’t require an even more elaborate solo part than the version with full orchestra. In any case, it has since come to light that this arrangement was probably not by Beethoven, and no autograph score in his hand exists.

I therefore play the solo part as it appears in the “normal” version, which is in any case far superior to the more ornate one. I’ve performed it in both versions, but prefer the “simpler” one greatly. I played a sort of hybrid when I performed it at my Celebrity Series concert but after that (2006) have played it only in the usual solo format. There are more than enough notes as it is! John’s little “Anniversary Waltz” from 1987 in an exquisite miniature and makes a nice encore after hearing his cadenzas in the Beethoven concerto.

Beethoven left three cadenzas for the first movement, and only one for the last. I thought: If Beethoven could visualize three different cadenzas, maybe I could convince John Harbison to write new ones. Not only did he do so, but they provide a prism through which a current great composer views a great composer of the past. I cannot thank him enough.