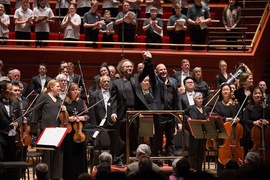 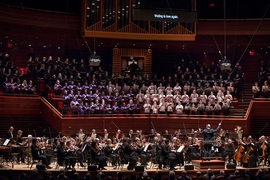 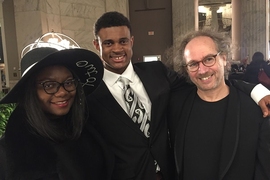 Philadelphia is having an entertaining 2018. The Eagles won the Super Bowl. Villanova rolled to the men’s national college basketball championship. And now, for a culture break, residents can enjoy “Philadelphia Voices,” an ambitious new symphony by acclaimed MIT composer Tod Machover. The piece, which incorporates citizen contributions and the sounds and words of everyday life, is the sixth part of the “City Symphony” series by Machover, who is the Muriel R. Cooper Professor of Music and Media at the MIT Media Lab. The symphony, having made its debut in Philadelphia from April 5-7, will also be performed at New York’s Carnegie Hall on April 10. MIT News spoke with Machover about “Philadelphia Voices.”

Q: What is the “City Symphony” series about, and how does “Philadelphia Voices” fit into it?

A: The City Symphonies have been an attempt to use music to make a portrait of a particular place, [by] combining what we usually think of as music — things that can be played by an orchestra — with actually listening to, recording, and then using the real sounds of the place. That could be parks, traffic, people, birds … anything that conveys the special qualities of the place. Another thing that’s special about these projects has been the call to everyone to participate in making the piece. People are willing to share things through music and sound that they may not be willing to share by having a verbal argument, or a political or social discussion.

When the Philadelphia Orchestra got in touch with me about bringing the City Symphony series to the city, the conductor, Yannick Nézet-Séguin — who is truly remarkable; he’s the conductor in Philadelphia and also the new music director at the Metropolitan Opera, one of the great vocal conductors — said, “Philadelphia has a great vocal tradition, with soloists and choirs around town of all different sorts. So it would be great if you might think about making the voice a central aspect of this piece.” And I loved that idea. It’s not something we had done in the other cities. [Toronto, Edinbugh, Perth, Detroit, and Lucerne.] The idea of voice suggested singing, of course, but it also suggested to me people telling stories and talking about the city. The voice is our most personal instrument.

At that moment, in 2016, with the presidential election in full swing, the division was obvious in the country, and the idea that democracy itself could be challenged was just shocking. Since Philadelphia is the birthplace of American democracy and is the place where the Constitution was written, I thought it would be interesting to have the citizens here [create] a message about democracy to other people around the country and the world. It’s a message about Philadelphia, but also from Philadelphia.

Q: To what extent are you trying to capture well-known things about a city, and how open do you have to be to new ideas as well?

A: In Toronto [the first in the series], I came in with a kind of graphic score that represented what the shape of the piece might be. After Toronto, I felt I had discovered so many surprising things that I made it my goal to start from scratch in every city. But in Philadelphia, because the voice had been suggested to me, and because of this idea of examining democracy, I did come in with ideas.

It turned out to be difficult to get people to talk about democracy directly. Nobody wanted to, except the historians. I did need to develop my “libretto,” so I asked people for words, texts, poems, and I got wonderful material, some through in-person discussions and some through a special mobile app that we developed at the MIT Media Lab. A poet named Jacob Winterstein said, “I think that the most democratic institution in Phildelphia is the block party, because Philadelphia is extremely local.” Most people think of their neighborhood, block, and even building as their unit. When they get together to close off the block and get the permit and cook together and be outside together, that is an amazing social phenomenon, and it happens all over the city. So, he wrote a poem [about] the block party, and I wrote a musical section about what would happen if the whole city had its block parties at the same time and this has become the kind of theme song for the whole symphony. Democracy [can] grow up from the smallest unit and can then unite people in powerful ways.

Q: How does this translate to the music itself?

A: Democracy sounds very abstract, but it is also an emotion and a texture. Music is a very good way of exploring how societies feel. In an orchestra, you may have 100 people, but after all, there’s a conductor there, and a composer writes the music, and it’s not necessarily the most democratic idea in the world. In some ways, you can think of a traditional orchestra and score being more like a monarchy. It grew out of a European society where things are directed from the top. You could think of jazz music, which is a very American form, as a kind of freedom. Everbody has a basic text but they go their own way and come back.

But [with] 100-plus people in the orchestra and 250-plus in the chorus, you can’t let everybody just do what they want. So in this piece, I’ve tried to explore what happens in between: The sixth movement is actually called “Democracy,” and with a group of 20 singers, we asked them to come up with a way of singing the word “Philadelphia” that says something about themselves, and also says something about what they feel about Philadelphia. They start out on their own, and then they overlap, and the orchestra imitates them, and everybody has to listen to each other.

There’s a moment where the conductor steps aside and lets the orchestra and the chorus follow these individual songs. And to me, it’s a feeling of democracy, in a messy city like Philadelphia which is wonderfully vibrant, but where not everybody is following the same tune, and not everybody is following the conductor. You feel the individuality of each of these choruses and of the individual singers, representing the kind of democracy — and the kind of listening to each other — that is most needed right now.

A: It was extremely gratifying to see the many parts of this complex project — orchestra, voices, soundscapes, texts, and electronics diffused through a specially designed sound system — come together so fluidly, and it was especially striking to see such a large chorus of people from all around Philly sing together as one diverse musical community. I was also wonderfully surprised to see the audience react viscerally and vocally at each performance, responding actively to the humor, the sonic and verbal references, and also to the harsher realities presented. Many people told me that the work captured Philadelphia in an uncanny way, and the Philadelphia Inquirer wrote: “The powerful ... fifth movement, 'My house is full of black people' … is music that could change hearts and minds in Philadelphia.”

And hopefully beyond. We’ll see what happens when we get to Carnegie Hall!

WBUR’s Christian Burno spotlights how audiences around the world will be able to listen to Prof. Tod Machover’s symphony, “Philadelphia Voices,” when it is streamed this weekend on the Philadelphia Orchestra’s website. Burno explains that Machover took “samplings of cityscapes, vocalizations and texts from Philadelphians” to create the piece.

Prof. Tod Machover speaks with Mary Louis Kelly and Audie Cornish of NPR’s All Things Considered about capturing the everyday sounds featured in his latest symphony, “Philadelphia Voices.” When recording the Commonwealth Youth Choir, for example, Machover explains that he “asked them to each sing the word Philadelphia in a way that showed something about how they felt about Philadelphia and also something about themselves.”

Prof. Tod Machover details his experience creating “Philadelphia Voices,” which is “the latest in a series of Machover symphonies inspired by cities,” writes Michael Cooper for The New York Times. “To help organize his library of Philadelphia sounds he used software developed at M.I.T. called Constellation, which can analyze hundreds of sound files by volume, frequency and shape, then visually display them.”

Prof. Tod Machover debuts his latest symphony, “Philadelphia Voices,” this week, and the AP’s Natalie Pompilio writes that it “both captures and celebrates the distinctive sounds and sizzle of Philadelphia.” The piece interweaves live music with recordings that include a “cheesesteak interlude,” birds at the Philadelphia Zoo, and children visiting the Museum of the American Revolution.