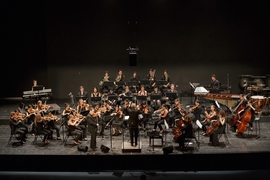 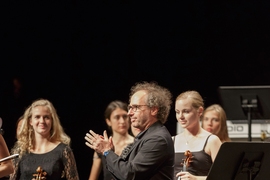 A new symphony that incorporates the sounds of the city it was composed for, and a concert where the musicians move around and use technologically enhanced instruments analyzing their performances — these are just two highlights of Tod Machover’s term as composer-in-residence for this year’s prestigious Lucerne Festival in Switzerland, including two world premieres later this month.

Machover, the Muriel R. Cooper Professor of Interactive Media Design at the MIT Media Lab, has written three new pieces in all — one already debuted, in August — and an updated performance of one of his classic works, “Hyperstring Trilogy,” originally written in part for the famed cellist Yo-Yo Ma.

Some of the works use “hyperinstruments,” a concept that Machover introduced in the 1980s — instruments that are technologically enhanced to provide, as he has put it, “extra power and finesse” for performers, and to record data about their use. Meanwhile, Machover’s “Symphony for Lucerne,” debuting Sept. 5, incorporates another innovation, drawing upon the sounds of Lucerne, Switzerland, itself, many of them submitted for consideration by local residents via Web and mobile apps developed in Machover’s research group at the MIT Media Lab.

“It’s a festival where there’s both an incredibly high musical level, and there’s also a real devotion to experimentation and devotion to new music,” says Machover, a 2012 Pulitzer Prize finalist for his opera “Death and the Powers.” Here is a look at the four Machover works being performed at the festival.

This new Machover composition for two pianos and electronics debuted on Aug. 23. It is a tribute to Pierre Boulez, the prominent French composer, now 90, who Machover has known for decades; this year’s Lucerne Festival is honoring Boulez.

Boulez helped extend the use of serial techniques in composing, a way of structuring works; Machover’s piece, whose title refers to to Boulez’s 1951 and 1962 works “Structures I” and “Structures II,” explores the tensions of creativity.

“I think one of the major tensions for creators in general and certainly for Boulez, more than anyone, is the relationship between what you do consciously and what you do intuitively,” Machover observes. “We all have a tug of war. I think with Boulez’s work, there’s an enormous passion and wildness under the surface he always tried to control, and so I try to bring that out in my piece.”

On Aug. 29, the Lucerne Festival Academy and soloists performed Machover’s 1991 “Hyperstring Trilogy,” the only performance of his work at the festival not based on a new composition. The original performance of one of the trilogy’s sections (titled “Begin Again Again …”) featured an augmented cello built for Ma that could measure factors such as string contact, hand position, and bow movement.

“It was the first physical hyperinstrument,” Machover says, adding that as a trained cellist himself, he wanted to be able to record “the slightest subtlety of the way you stop the string or move you finger on it. Everything matters. I wanted to measure those things so that the subtle changes that someone as fantastic as Yo-Yo does while playing would be measured, analyzed, and reflected.”

To bring “Hyperstring Trilogy” back to Lucerne in 2015, a group effort was needed, Machover says. Rebecca Kleinberger, a PhD student in Machover’s research group, and Wellesley College undergraduate Galen Chuang, participating through MIT’s Undergraduate Research Opportunities Program, reconstructed the music and systems used in past performances, while 2015 MIT alumnus Kevin King helped redevelop the technology being used this year to control sensing and interaction. (“Remarkable,” Machover says of the student efforts.)

“It’s one of my pieces I feel most strongly about,” adds Machover, who loosely based the composition on the emotional and psychological arc of Dante’s “Divine Comedy.”

“A Symphony for Lucerne”

A few years ago, Machover tried a new project: a symphony for the city of Toronto, about Toronto, incorporating textures based on the sounds of Toronto itself. He invited Torontonians to collaborate with him to create “A Toronto Symphony” via forums allowing them to contribute sounds and impressions that give meaning to their urban experiences. It worked; Machover has subsequently written symphonies for Edinburgh, Scotland, and Perth, Australia.

Now Machover has written “A Symphony for Lucerne,” the fourth in the series. “From the beginning my idea was to make a portrait of a city through music,” Machover says. Lucerne, he says “is a beautiful place, a kind of idyllic place. But there is also a lot of creativity and vitality, including strange music and sounds coming out of this place that I hadn’t expected.” (The piece also contains a wry reference to Swiss cows.)

Machover solicited input by reaching out to people in workshops and other forums over the last year. “This feels like the right combination between my personal work as a composer and the community,” he says.

The last of Machover’s three world premieres at the Lucerne festival, debuting Sept. 12, “Fensadense” is a highly experimental concert written for 10 players, using interactive hyperinstruments and giving the performers freedom to move around on (and off) stage while they produce data about how they are playing.

“I’m really excited about it, but it’s one of the most difficult things I’ve ever done,” Machover says.

“Fensadense” is a roughly 30-minute piece, which requires the performers to memorize their parts — since they are in motion — and necessitates virtuoso-level musicians. The piece has five stringed instruments, as well as clarinet, bass clarinet, tuba, piano plus electric keyboard, and percussion.

“I’ve been working on doing something really crazy and uncompromising with this new technology, where the musicians are capable of organizing themselves,” Machover says. Media Lab alumnus Peter Torpey and MIT junior Garrett Parish designed the hyperinstrument systems, along with PhD student Ben Bloomberg, whose “Hyperproduction” system runs all of Machover’s Lucerne projects. Bloomberg leads the project development and technical coordination, is the sound designer for the shows, and mixes all the performances.

“It’s really been challenging, but it’s been inspiring,” says Machover, noting that rehearsals for the piece and tests for the instruments are ongoing — and adding that the Lucerne festival is one of the few events for which he could have created such varying works.

“Each of the projects has a different character, and a different reason for existing,” Machover says.

AP reporter Mike Householder writes about Prof. Tod Machover’s “Symphony in D,” which features the sounds of everyday Detroit. "It somehow sounds like something that could only have been done here. And that makes me really happy," says Machover.

In this AP TV video, Prof. Tod Machover discusses the development of his latest work, “Symphony in D,” a piece about the city of Detroit. “I really wanted it to be a portrait of the city so I invited everybody in the city, anybody who wanted to, to collaborate,” says Machover.

The New York Times’ Zachary Woolfe writes about Prof. Tod Machover’s work “Symphony in D,” the latest in his series of city symphonies. Woolfe writes that the piece is “an explosion of energy, found sounds, live-music snippets and reminiscences featuring spoken and played interpolations from a range of Detroit artists.”