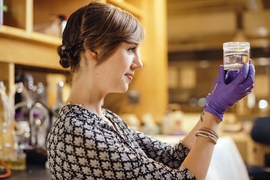 In the second grade, Kelsey Moore became acquainted with geologic time. Her teachers instructed the class to unroll a giant strip of felt down a long hallway in the school. Most of the felt was solid black, but at the very end, the students caught a glimpse of red.

That tiny red strip represented the time on Earth in which humans have lived, the teachers said. The lesson sparked Moore’s curiosity. What happened on Earth before there were humans? How could she find out?

A little over a decade later, Moore enrolled in her first geoscience class at Smith College and discovered she now had the tools to begin to answer those very questions.

Moore zeroed in on geobiology, the study of how the physical Earth and biosphere interact. During the first semester of her sophomore year of college, she took a class that she says “totally blew my mind.”

“I knew I wanted to learn about Earth history. But then I took this invertebrate paleontology class and realized how much we can learn about life and how life has evolved,” Moore says. A few lectures into the semester, she mustered the courage to ask her professor, Sara Pruss in Smith’s Department of Geosciences, for a research position in the lab.

Now a fourth-year graduate student at MIT, Moore works in the geobiology lab of Associate Professor Tanja Bosak in MIT’s Department of Earth, Atmospheric, and Planetary Sciences. In addition to carrying out her own research, Moore, who is also a Graduate Resident Tutor in the Simmons Hall undergraduate dorm, makes it a priority to help guide the lab’s undergraduate researchers and teach them the techniques they need to know.

“We have a natural curiosity about how we got here, and how the Earth became what it is. There’s so much unknown about the early biosphere on Earth when you go back 2 billion, 3 billion, 4 billion years,” Moore says.

Moore studies early life on Earth by focusing on ancient microbes from the Proterozoic, the period of Earth’s history that spans 2.5 billion to 542 million years ago — between the time when oxygen began to appear in the atmosphere up until the advent and proliferation of complex life. Early in her graduate studies, Moore and Bosak collaborated with Greg Fournier, the Cecil and Ida Green Assistant Professor of Geobiology, on research tracking cyanobacterial evolution. Their research is supported by the Simons Collaboration on the Origins of Life.

The question of when cyanobacteria gained the ability to perform oxygenic photosynthesis, which produces oxygen and is how many plants on Earth today get their energy, is still under debate. To track cyanobacterial evolution, MIT researchers draw from genetics and micropaleontology. Moore works on molecular clock models, which track genetic mutations over time to measure evolutionary divergence in organisms.

Clad with a white lab coat, lab glasses, and bright purple gloves, Moore sifts through multiple cyanobacteria under a microscope to find modern analogs to ancient cyanobacterial fossils. The process can be time-consuming.

“I do a lot of microscopy,” Moore says with a laugh. Once she’s identified an analog, Moore cultures that particular type of cyanobacteria, a process which can sometimes take months. After the strain is enriched and cultured, Moore extracts DNA from the cyanobacteria. “We sequence modern organisms to get their genomes, reconstruct them, and build phylogenetic trees,” Moore says.

By tying information together from ancient fossils and modern analogs using molecular clocks, Moore hopes to build a chronogram — a type of phylogenetic tree with a time component that eventually traces back to when cyanobacteria evolved the ability to split water and produce oxygen.

Moore also studies the process of fossilization, on Earth and potentially other planets. She is collaborating with researchers at NASA’s Jet Propulsion Laboratory to help them prepare for the upcoming Mars 2020 rover mission.

“We’re trying to analyze fossils on Earth to get an idea for how we’re going to look at whatever samples get brought back from Mars, and then to also understand how we can learn from other planets and potentially other life,” Moore says.

“I really love research. So why stop? I’m going to keep going,” Moore says. She says she wants to teach in an institution that emphasizes giving research opportunities to undergraduate students.

“Undergrads can be overlooked, but they’re really intelligent people and they’re budding scientists,” Moore says. “So being able to foster that and to see them grow and trust that they are capable in doing research, I think, is my calling.”

To study ancient organisms and find fossils, Moore has traveled across the world, to Shark Bay in Australia, Death Valley in the United States, and Bermuda.

“In order to understand the rocks, you really have to get your nose on the rocks. Go and look at them, and be there. You have to go and stand in the tidal pools and see what’s happening — watch the air bubbles from the cyanobacteria and see them make oxygen,” Moore says. “Those kinds of things are really important in order to understand and fully wrap your brain around how important those interactions are.”

And in the field, Moore says, researchers have to “roll with the punches.”

“You don’t have a nice, beautiful, pristine lab set up with all the tools and equipment that you need. You just can’t account for everything,” Moore says. “You have to do what you can with the tools that you have.”

As a Graduate Resident Tutor, Moore helps to create supporting living environments for the undergraduate residents of Simmons Hall.

Each week, she hosts a study break in her apartment in Simmons for her cohort of students — complete with freshly baked treats. “[Baking] is really relaxing for me,” Moore says. “It’s therapeutic.”

“I think part of the reason I love baking so much is that it’s my creative outlet,” she says. “I know that a lot of people describe baking as like chemistry. But I think you have the opportunity to be more creative and have more fun with it. The creative side of it is something that I love, that I crave outside of research.”

Part of Moore’s determination to research, trek out in the field, and mentor undergraduates draws from her “biggest science inspiration” — her mother, Michele Moore, a physics professor at Spokane Falls Community College in Spokane, Washington.

“She was a stay-at-home mom my entire childhood. And then when I was in middle school, she decided to go and get a college degree,” Moore says. When Moore started high school, her mother earned her bachelor’s degree in physics. Then, when Moore started college, her mother earned her PhD. “She was sort of one step ahead of me all the time, and she was a big inspiration for me and gave me the confidence to be a woman in science.”

Classroom Earth: Drones over the desert