An increase in corn and soybean production in the Midwest may have led to cooler, wetter summers there.
Watch Video
David L. Chandler | MIT News Office
Publication Date:
Press Inquiries 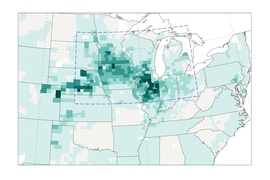 ↓ Download Image
Caption: Maps depict the close correlation of crop production, rainfall and temperature in the U.S. Midwest in the last half of the 20th century. In this map, the number of bushels of corn produced are shown in shades of green. 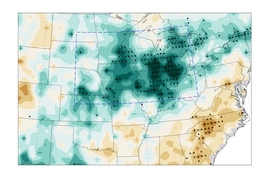 ↓ Download Image
Caption: This map shows deviations in precipitation compared to the previous half-century. Areas of increased rainfall are shown in green (with the darkness increasing in proportion to the amount of increase) and areas 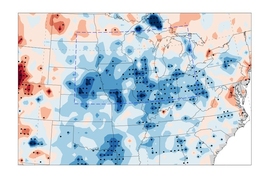 Caption:
Maps depict the close correlation of crop production, rainfall and temperature in the U.S. Midwest in the last half of the 20th century. In this map, the number of bushels of corn produced are shown in shades of green.

Scientists agree that changes in land use such as deforestation, and not just greenhouse gas emissions, can play a significant role altering the world’s climate systems. Now, a new study by researchers at MIT and Dartmouth College reveals how another type of  land use, intensive agriculture, can impact regional climate.

The researchers show that in the last half of the 20th century, the midwestern U.S. went through an intensification of agricultural practices that led to dramatic increases in production of corn and soybeans. And, over the same period in that region, summers were significantly cooler and had greater rainfall than during the previous half-century. This effect, with regional cooling in a time of overall global warming, may have masked part of the warming effect that would have occurred over that period, and the new finding could help to refine global climate models by incorporating such regional effects.

The findings are being published this week in Geophysical Research Letters, in a paper by Ross Alter, a recent MIT postdoc; Elfatih Eltahir, the Breene M. Kerr Professor of Hydrology and Climate; and two others.

The team showed that there was a strong correlation, in both space and time, between the intensification of agriculture in the Midwest, the decrease in observed average daytime temperatures in the summer, and an increase in the observed local rainfall. In addition to this circumstantial evidence, they identified a mechanism that explains the association, suggesting that there was indeed a cause-and-effect link between the changes in vegetation and the climatic effects.

Eltahir explains that plants “breathe” in the carbon dioxide they require for photosynthesis by opening tiny pores, called stoma, but each time they do this they also lose moisture to the atmosphere. With the combination of improved seeds, fertilizers, and other practices, between 1950 and 2009 the annual yield of corn in the Midwest increased about fourfold and that of soybeans doubled. These changes were associated with denser plants with more leaf mass, which thus increased the amount of moisture released into the atmosphere. That extra moisture served to both cool the air and increase the amount of rainfall, the researchers suggest.

“For some time, we’ve been interested in how changes in land use can influence climate,” Eltahir says. “It’s an independent problem from carbon dioxide emissions,” which have been more intensively studied.

Eltahir, Alter, and their co-authors noticed that records showed that over the course of the 20th century, “there were substantial changes in regional patterns of temperature and rainfall. A region in the Midwest got colder, which was a surprise,” Eltahir says. Because weather records in the U.S are quite extensive, there is “a robust dataset that shows significant changes in temperature and precipitation” in the region.

By introducing into a regional U.S. climate model a factor to account for the more intensive agriculture that has made the Midwest one of the world’s most productive agricultural areas, the researchers found, “the models show a small increase in precipitation, a drop in temperature, and an increase in atmospheric humidity,” Eltahir says — exactly what the climate records actually show.

That distinctive “fingerprint,” he says, strongly suggests a causative association. “During the 20th century, the midwestern U.S. experienced regional climate change that’s more consistent with what we’d expect from land-use changes as opposed to other forcings,” he says.

This finding in no way contradicts the overall pattern of global warming, Eltahir stresses. But in order to refine the models and improve the accuracy of climate predictions, “we need to understand some of these regional and local processes taking place in the background.”

Unlike land-use changes such as deforestation, which can reduce the absorption of carbon dioxide by trees that can help to ameliorate emissions of the gas, the changes in this case did not reflect any significant increase in the area under cultivation, but rather a dramatic increase in yields from existing farmland. “The area of crops did not expand by a whole lot over that time, but crop production increased substantially, leading to large increases in crop yield,” Alter explains.

The findings suggest the possibility that at least on a small-scale regional or local level, intensification of agriculture on existing farmland could be a way of doing some local geoengineering to at least slightly lessen the impacts of global warming, Eltahir says. A recent paper from another group in Switzerland suggests just that.

But the findings could also portend some negative impacts because the kind of intensification of agricultural yields achieved in the Midwest are unlikely to be repeated, and some of global warming’s effects may “have been masked by these regional or local effects. But this was a 20th-century phenomenon, and we don’t expect anything similar in the 21st century,” Eltahir says. So warming in that region in the future “will not have the benefit of these regional moderators.”

“This is a really important, excellent study,” says Roger Pielke Sr., a senior research scientist at CIRES, at the University of Colorado at Boulder, who was not involved in this work. “The leadership of the climate science community has not yet accepted that human land management is at least as important on regional and local climate as the addition of carbon dioxide and other greenhouse gases into the atmosphere by human activities.”

Pielke adds that “Professor Eltahir has been one of the pioneers in the improvement of our knowledge on this scientifically and societally important issue.” This paper “is a significant contribution on this subject.”

The research team also included recent MIT graduate Hunter Douglas ’16 and Jonathan Winter at Dartmouth College. Lead author Alter, who carried out this research as an MIT postdoc, is now a research meteorologist for the Cold Regions Research and Engineering Laboratory, part of the Engineer Research and Development Center (ERDC) within the U.S. Army Corps of Engineers. The work was supported by a cooperative agreement between the Masdar Institute and MIT, and by USDA-NIFA.

Researchers utilized weather data from the region between Texas, North Dakota, and Ohio to see if an increase in crop growth had an effect on area climate change. Kimberly Hickok writes for Science that there is "strong indication" that the regional changes in climate in the late 20th century can be attributed to “agriculture, and not changing sea surface temperature."