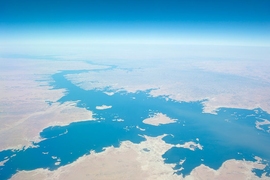 ↓ Download Image
Caption: Researchers at MIT have found that climate change may drastically increase the variability in Nile’s annual output.

Caption:
Researchers at MIT have found that climate change may drastically increase the variability in Nile’s annual output.

The unpredictable annual flow of the Nile River is legendary, as evidenced by the story of Joseph and the Pharaoh, whose dream foretold seven years of abundance followed by seven years of famine in a land whose agriculture was, and still is, utterly dependent on that flow. Now, researchers at MIT have found that climate change may drastically increase the variability in Nile’s annual output.

Being able to predict the amount of flow variability, and even to forecast likely years of reduced flow, will become ever more important as the population of the Nile River basin, primarily in Egypt, Sudan, and Ethiopia, is expected to double by 2050, reaching nearly 1 billion. The new study, based on a variety of global climate models and records of rainfall and flow rates over the last half-century, projects an increase of 50 percent in the amount of flow variation from year to year.

The study, published in the journal Nature Climate Change, was carried out by professor of civil and environmental engineering Elfatih Eltahir and postdoc Mohamed Siam. They found that as a result of a warming climate, there will be an increase in the intensity and duration of the Pacific Ocean phenomenon known as the El Niño/La Niña cycle, which they had previously shown is strongly connected to annual rainfall variations in the Ethiopian highlands and adjacent eastern Nile basins. These regions are the primary sources of the Nile’s waters, accounting for some 80 percent of the river’s total flow.

The cycle of the Nile’s floods has been “of interest to human civilization for millennia,” says Eltahir, the Breene M. Kerr Professor of Hydrology and Climate. Originally, the correlation he showed between the El Niño/La Niña cycle and Ethiopian rainfall had been aimed at helping with seasonal and short-term predictions of the river’s flow, for planning storage and releases from the river’s many dams and reservoirs. The new analysis is expected to provide useful information for much longer-term strategies for placement and operation of new and existing dams, including Africa’s largest, the Grand Ethiopian Renaissance Dam, now under construction near the Ethiopia-Sudan border.

While there has been controversy about that dam, and especially about how the filling of its reservoir will be coordinated with downstream nations, Eltahir says this study points to the importance of focusing on the potential impacts of climate change and rapid population growth as the most significant drivers of environmental change in the Nile basin. “We think that climate change is pointing to the need for more storage capacity in the future,” he says. “The real issues facing the Nile are bigger than that one controversy surrounding that dam.”

Using a variety of global circulation models under “business as usual” scenarios, assuming that major reductions in greenhouse gas emissions do not take place, the study finds that the changing rainfall patterns would likely lead to an average increase of the Nile’s annual flow of 10 to 15 percent. That is, it would grow from its present 80 cubic kilometers per year to about 92 or more cubic kilometers per year averaged over the 21st century, compared to the 20th century average.

The findings also suggest that there will be substantially fewer “normal” years, with flows between 70 and 100 cubic kilometers per year. There will also be many more extreme years with flows greater than 100, and more years of drought. (Statistically, the variability is measured as the standard deviation of the annual flow rates, which is the number that is expected to see a 50 percent rise).

The pattern has in fact played out over the last two years — 2015, an intense El Niño year, saw drought conditions in the Nile basin, while the La Niña year of 2016 saw high flooding. “It’s not abstract,” Eltahir says. “This is happening now.”

As with Joseph’s advice to Pharaoh, the knowledge of such likely changes can help planners to be prepared, in this case by storing water in huge reservoirs to be released when it is really needed.

"Too often we focus on how climate change might influence average conditions, to the exclusion of thinking about variability," says Ben Zaitchik, an associate professor of earth and planetary sciences at Johns Hopkins University, who was not involved in this work. "That can be a real problem for a place like the Eastern Nile basin, where average rainfall and streamflow might increase with climate change, suggesting that water will be plentiful. But if variability increases as well, then there could be as frequent or more frequent stress events, and significant planning — in infrastructure or management strategies — might be required to ensure water security."

Already, Eltahir’s earlier work on the El Niño/La Niña correlation with Nile flow is making an impact. “It’s used operationally in the region now in issuing seasonal flood forecasts, with a significant lead time that gives water resources engineers enough time to react. Before, you had no idea,” he says adding that he hopes the new information will enable even better long-term planning. “By this work, we at least reduce some of the uncertainty.”

The Economist highlights a study by MIT researchers that shows climate change could cause the flow of the Nile River to become more variable, increasing strain on regional water conflicts. The researchers found that while output could increase by up to 15%, variability would also increase, resulting in, “more (and worse) floods and droughts.”

In an article for Scientific American, Kavya Balaraman writes that MIT researchers have found that climate change could impact rainfall conditions over the Nile, potentially exacerbating water conflicts. Prof. Elfatih Eltahir explains that with the increased frequency of El Niño and La Niña, “we are projecting enhanced variability in the Nile flow.”