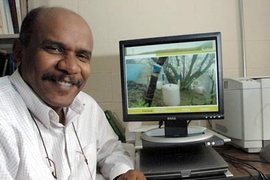 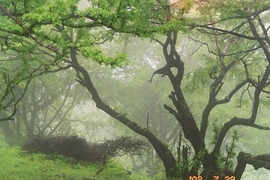 Trees that live in an odd desert forest in Oman have found an unusual way to water themselves by extracting moisture from low-lying clouds, MIT scientists report.

In an area that is characterized mostly by desert, the trees have preserved an ecological niche because they exploit a wispy-thin source of water that only occurs seasonally, said Elfatih A.B. Eltahir, professor of civil and environmental engineering, and former MIT graduate student Anke Hildebrandt.

After studying the Oman site, they also expressed concern that the unusual forest could be driven into extinction if hungry camels continue eating too much of the foliage. As the greenery disappears it's possible the trees will lose the ability to pull water from the mist and recharge underground reservoirs.

A report on their research was published in a recent issue of Geophysical Research Letters. They are also advising the Omani government on handling the problem.

The forest is especially unique, said Eltahir and Hildebrandt, because it "is a water-limited seasonal cloud forest" that is kept alive by water droplets gathered from passing clouds -- ground fog. The water dribbles into the ground and sustains the trees later when the weather is dry. The MIT work suggests the trees actually get more of their water through contact with clouds than via rainfall.

In general, cloud forests are not really rare. But they occur most frequently in moist tropical regions where there is ample rainfall. So it is unusual, the researchers said, to find a cloud forest in a region known for chronic dryness.

The researchers studied the area in Oman to learn how the Dhofar Mountain ecosystem "functions naturally, and how it may respond to human activity" that could lead to desertification and the need for reforestation.

Eltahir and Hildebrandt, who is now at the UFZ Center for Environmental Research, in Leipzig, Germany, said the unusual forest is an interesting remnant "of a moist vegetation belt that once spread across the Arabian Peninsula" in the distant past. At that time the regional climate was generally wetter.

The forested area in the Sultanate of Oman is now semi-arid, and most of the ancient tree vegetation is gone. This small remnant has managed to survive in the Dhofar Mountains.

But it is under threat.

Although many Omanis have moved into cities and towns as the country has grown rich on oil, Eltahir explained, a family's prestige still comes from owning many camels, and people now tend to keep more camels than they need, which is part of the problem facing the forest.

"It is an unusual place," Eltahir said. "It's a very good example of a unique and fragile ecosystem" where constant pressure from over-grazing can have consequences beyond defoliation. In fact, the forest illustrates how small changes can lead to major impact on far bigger systems, Eltahir said.

The trees in wetter ecosystems would likely recover from small amounts of over-grazing, Eltahir said, but "in this location, due to the nature of the interaction of the canopy structure with the clouds, the trees may not recover."

The two said the forest probably would not regenerate naturally once it is gone. Without the trees that sweep the extra water from clouds, the forest cannot regrow. Grass, even if abundant, cannot collect enough moisture from fog to let a forest regrow.