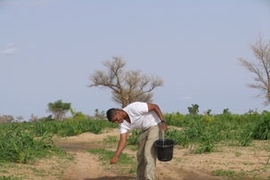 Modifying the environment by using everything from shovels and plows to plant-derived pesticides may be as important as mosquito nets and vaccinations in the fight against malaria, according to a computerized analysis by MIT researchers.

The researchers have developed a new computer model for analyzing different methods of trying to control the spread of malaria, one of the world's most-devastating diseases. Among their findings using the model is that environmental measures such as leveling the land to eliminate depressions where pools can form can be an important part of the strategy for controlling the disease.

Reports on the work, carried out by Professor of Civil and Environmental Engineering Elfatih Eltahir and graduate students Arne Bomblies and Rebecca Gianotti, were presented this week at a meeting of the American Geophysical Union in San Francisco.

Malaria, Eltahir explained, is "a significant global health challenge" that accounts for one-third of all deaths of children under 5 worldwide. By developing new software to analyze the impacts of different methods of attempting to limit malaria's spread, which involves a complex chain of transmission between larvae, mosquitoes and humans, "we have made significant progress" toward better control of the disease, he said.

While most efforts at dealing with malaria have focused on the human side, such as attempts to develop a vaccine, Eltahir said that efforts to control environmental factors --such as working to eliminate the low spots where pools of water collect during the rainy season, or applying locally grown plant materials to limit the growth of mosquitoes -- can have a dramatic effect on controlling malaria's spread. And unlike importing expensive medicines, such an approach can rely on local efforts as simple as having people with shovels fill in the low spots in the terrain.

"By using local tools and local labor, our approach relies less on high-technology equipment from outside the region, which tends to make the local people more dependent," he said.

In addition, the new comprehensive computer model will provide a tool for analyzing how different areas' vulnerability to malaria will be affected by a changing climate.

To validate the accuracy of the computer modeling of conditions, the team has been working for the last four years in a remote area of Niger, which lies in the Sahel desert region of northern Africa. "Africa is the hot spot for malaria in general," Eltahir explained, so this fieldwork provides substantial validation of the model.

In the field, Bomblies and others have monitored every aspect of malaria's lifecycle, including doing counts of mosquito larvae and adult mosquitoes, identifying the exact species of mosquitoes (since only specific varieties carry the malaria parasite), and mapping the topography and monitoring the size and duration of pools of water where the mosquitoes breed. "We gathered data that would serve as validation for the model that we were developing," Bomblies said.

Eliminating pools of standing water, or increasing drainage so that such pools last less than the seven to 10 days it takes for the mosquitoes to mature, can be an effective strategy, the analysis shows. In addition, it allows comparison of different methods. Filling in the low spots using shovels, it turns out, is as effective at controlling the disease as plowing the land so that water more rapidly percolates down into the soil.

That is not a new idea, but the new software provides a quantitative way to compare its impact with other approaches, and to develop specific strategies for a given region. Filling in low spots "is an established technique," said Bomblies, who has spent a total of 13 months leading the fieldwork in Niger. "But it hasn't been specifically applied in the region in which we've been working."

And unlike other approaches such as vaccinations or mosquito nets, it has a relatively permanent impact. "Once a breeding site is gone, it's gone" Bomblies said.

Other methods the team has studied include spreading ground up seeds from the neem tree, which grows locally, in the ponds, which can reduce the mosquito population by about 50 percent.

"For the first time, we have a detailed computer model" of all the different factors in the disease's spread, Eltahir said. By making it possible to run detailed simulations of a wide variety of strategies, "we can do a lot of things, in this region or elsewhere, that we could never do in the past. It can allow you to do things in a more cost-effective way."

This project has been funded by the ocean and human health program of the National Oceanographic and Atmospheric Administration (NOAA), and the National Science Foundation.