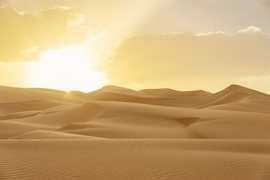 Within this century, parts of the Persian Gulf region could be hit with unprecedented events of deadly heat as a result of climate change, according to a study of high-resolution climate models.

The research reveals details of a business-as-usual scenario for greenhouse gas emissions, but also shows that curbing emissions could forestall these deadly temperature extremes.

The study, published today in the journal Nature Climate Change, was carried out by Elfatih Eltahir, a professor of civil and environmental engineering at MIT, and Jeremy Pal PhD ’01 at Loyola Marymount University. They conclude that conditions in the Persian Gulf region, including its shallow water and intense sun, make it “a specific regional hotspot where climate change, in absence of significant mitigation, is likely to severely impact human habitability in the future.”

Running high-resolution versions of standard climate models, Eltahir and Pal found that many major cities in the region could exceed a tipping point for human survival, even in shaded and well-ventilated spaces. Eltahir says this threshold “has, as far as we know … never been reported for any location on Earth.”

That tipping point involves a measurement called the “wet-bulb temperature” that combines temperature and humidity, reflecting conditions the human body could maintain without artificial cooling. That threshold for survival for more than six unprotected hours is 35 degrees Celsius, or about 95 degrees Fahrenheit, according to recently published research. (The equivalent number in the National Weather Service’s more commonly used “heat index” would be about 165 F.)

This limit was almost reached this summer, at the end of an extreme, weeklong heat wave in the region: On July 31, the wet-bulb temperature in Bandahr Mashrahr, Iran, hit 34.6 C — just a fraction below the threshold, for an hour or less.

But the severe danger to human health and life occurs when such temperatures are sustained for several hours, Eltahir says — which the models show would occur several times in a 30-year period toward the end of the century under the business-as-usual scenario used as a benchmark by the Intergovernmental Panel on Climate Change.

The Persian Gulf region is especially vulnerable, the researchers say, because of a combination of low elevations, clear sky, water body that increases heat absorption, and the shallowness of the Persian Gulf itself, which produces high water temperatures that lead to strong evaporation and very high humidity.

The models show that by the latter part of this century, major cities such as Doha, Qatar, Abu Dhabi, and Dubai in the United Arab Emirates, and Bandar Abbas, Iran, could exceed the 35 C threshold several times over a 30-year period. What’s more, Eltahir says, hot summer conditions that now occur once every 20 days or so “will characterize the usual summer day in the future.”

While the other side of the Arabian Peninsula, adjacent to the Red Sea, would see less extreme heat, the projections show that dangerous extremes are also likely there, reaching wet-bulb temperatures of 32 to 34 C. This could be a particular concern, the authors note, because the annual Hajj, or annual Islamic pilgrimage to Mecca — when as many as 2 million pilgrims take part in rituals that include standing outdoors for a full day of prayer — sometimes occurs during these hot months.

While many in the Persian Gulf’s wealthier states might be able to adapt to new climate extremes, poorer areas, such as Yemen, might be less able to cope with such extremes, the authors say.

Christoph Schaer, a professor of atmospheric and climate science at ETH Zurich who was not involved in this study, provided an independent commentary in the journal, writing that while deadly heat waves have occurred recently in Chicago, Russia, and Europe, in these cases infants and the elderly were most affected. The new study, Schaer writes, “concerns another category of heat waves — one that may be fatal to everybody affected, even to young and fit individuals under shaded and well-ventilated outdoor conditions.”

Schaer writes that “the new study shows that the threats to human health may be much more severe than previously thought, and may materialize already in the current century.” He told MIT News, “I think the study is of great importance, since it indicates where heat waves could get worst if climate change proceeds.”

The research was supported by the Kuwait Foundation for the Advancement of Science.

In an article for USA Today, Colin Chilcoat highlights a study co-authored by Prof. Elfatih Eltahir that indicates that climate change could cause the Persian Gulf to experience severe heat with greater regularity. Greenhouse-gas buildup could raise “temperatures to intolerable seasonal highs and [increase] the frequency and severity of extreme heat waves,” writes Chilcoat.

“A study predicting deadly heat waves in the Persian Gulf by the century’s end has underscored concerns about the effects of rising global temperatures on cities in other parts of the world, including the United States,” writes Joby Warrick of a new study co-authored by MIT researchers in a piece for The Washington Post.

Brandon Miller reports for CNN on an MIT study that indicates that climate change could drastically increase the frequency of extreme heat events in the Persian Gulf. By 2100 temperatures could be “31°C on an average summer day and the most extreme days could exceed the lethal value of 35°C,” writes Miller.

A new study by Prof. Elfatih Eltahir indicates that climate change could cause the Persian Gulf region to warm to lethal levels of heat and humidity, reports Alan Kasujja for BBC’s Newsday. “The ability of a human body to adapt to that kind of environment becomes very limited,” explains Eltahir.

Nitya Rajan reports for The Huffington Post on a new study co-authored by MIT researchers that found that climate change could raise temperatures in the Persian Gulf region to fatal levels by the end of this century. “Beyond a certain threshold, the human body loses the ability to get rid of heat,” writes Rajan.

Doyle Rice writes for USA Today about a new MIT study that finds evidence that heat in the Persian Gulf region could reach intolerable levels due to climate change. The researchers found that “extreme heat that might occur 1 out of 20 days now will be the normal summer day of 2070 and beyond.”

New research by Prof. Elfatih Eltahir indicates that climate change could result in lethal heat waves in the Persian Gulf, according to the Associated Press. "You can go to a wet sauna and put the temperature up to 35 (Celsius) or so,” explains Eltahir. “You can bear it for a while, now think of that at an extended exposure."

Research by Prof. Elfatih Eltahir indicates that, if climate change goes unchecked, the Persian Gulf could see deadly high temperatures by 2100, writes Damian Carrington for The Guardian. Gulf countries “have a vital interest in supporting measures that would help reduce the concentration of CO2 in the future,” says Eltahir.

Prof. Elfatih Eltahir’s new study predicts that "temperatures as high as 113 degrees Fahrenheit would become the norm during the summer in the low-lying region of the Persian Gulf,” writes Michael Casey for Fox News. Eltahir’s findings were based on several climate models.

New York Times reporter John Schwartz writes that a new study co-authored by Prof. Elfatih Eltahir has found that extreme heat events will be far more common in the Persian Gulf by the end of the century due to climate change. “When they happen, they will be quite lethal,” says Eltahir.

In a new study, Prof. Elfatih Eltahir warns that unmitigated climate change could increase the frequency of high-temperature events in the Persian Gulf by 2100, writes Chris Arsenault for Reuters. "If greenhouse gas emissions continue on their current trajectory, then temperatures in that region will reach levels intolerable to humans," says Eltahir.

New Scientist reporter Fred Pearce writes about a new study by Prof. Elfatih Eltahir that indicates the Persian Gulf region could see lethally high temperatures by the end of the century. The study predicts the region could see temperatures rise to levels where “the human body can no longer get rid of heat,” explains Eltahir.

A study by Prof. Elfatih Eltahir indicates that climate change may make deadly heat waves a more common occurrence in the Persian Gulf, writes Alex Nussbaum for Bloomberg Business. Eltahir explains that the heat waves may “exceed what a human body may be able to tolerate.”