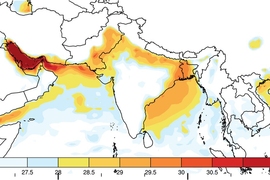 ↓ Download Image
Caption: A new study shows that without significant reductions in carbon emissions, deadly heat waves could begin within as little as a few decades to strike regions of India, Pakistan, and Bangladesh. This map shows the maximum wet-bulb temperatures (which combine temperature and humidity) that have been reached in this region since 1979.

Caption:
A new study shows that without significant reductions in carbon emissions, deadly heat waves could begin within as little as a few decades to strike regions of India, Pakistan, and Bangladesh. This map shows the maximum wet-bulb temperatures (which combine temperature and humidity) that have been reached in this region since 1979.

In South Asia, a region of deep poverty where one-fifth of the world’s people live, new research suggests that by the end of this century climate change could lead to summer heat waves with levels of heat and humidity that exceed what humans can survive without protection.

There is still time to avert such severe warming if measures are implemented now to reduce the most dire consequences of global warming. However, under business-as-usual scenarios, without significant reductions in carbon emissions, the study shows these deadly heat waves could begin within as little as a few decades to strike regions of India, Pakistan, and Bangladesh, including the fertile Indus and Ganges river basins that produce much of the region’s food supply.

The new findings, based on detailed computer simulations using the best available global circulation models, are described this week in the journal Science Advances, in a paper by Elfatih Eltahir, the Breene M. Kerr Professor of Civil and Environmental Engineering at MIT; Eun Soon Im, a former researcher at the Singapore-MIT Alliance for Research and Technology and now a professor at the Hong Kong University of Science and Technology; and Jeremy Pal, a professor at Loyola Marymount University in Los Angeles.

The study follows an earlier report by Eltahir and his team that looked at projected heat waves in the Persian Gulf region. While the number of extreme-heat days projected for that region was even worse than for South Asia, Eltahir says the impact in the latter area could be vastly more severe. That’s because while the Persian Gulf area has a relatively small, relatively wealthy population and little agricultural land, the areas likely to be hardest hit in northern India, Bangladesh, and southern Pakistan are home to 1.5 billion people. These areas are also among the poorest in the region, with much of the population dependent on subsistence farming that requires long hours of hard labor out in the open and unprotected from the sun.

“That makes them very vulnerable to these climatic changes, assuming no mitigation,” says Eltahir, who spoke with MIT News from Singapore, where he is carrying out follow-up research on potential climate effects in that area.

While the projections show the Persian Gulf may become the region of the worst heat waves on the planet, northern India is a close second, Eltahir says, and eastern China, also densely populated, is third. But the highest concentrations of heat in the Persian Gulf would be out over the waters of the Gulf itself, with lesser levels over inhabited land.

The new analysis is based on recent research showing that hot weather’s most deadly effects for humans comes from a combination of high temperature and high humidity, an index which is measured by a reading known as wet-bulb temperature. This reflects the ability of moisture to evaporate, which is the mechanism required for the human body to maintain its internal temperature through the evaporation of sweat. At a wet-bulb temperature of 35 degrees Celsius (95 degrees Fahrenheit), the human body cannot cool itself enough to survive more than a few hours.

A previous study of temperature and humidity records show that in today’s climate, wet-bulb temperatures have rarely exceeded about 31 C anywhere on Earth. While the earlier report from Eltahir and his colleagues showed that this survivability limit would start to be exceeded occasionally in the Persian Gulf region by the end of this century, actual readings there in the summer of 2015 showed that the 35-degree wet-bulb limit had almost been reached already, suggesting that such extremes could begin happening earlier than projected. The summer of 2015 also produced one of the deadliest heat waves in history in South Asia, killing an estimated 3,500 people in Pakistan and India.

And yet, India and China remain two countries where emission rates of greenhouse gases continue to rise, driven mostly by economic growth, Eltahir says. “So I think these results pose a dilemma for countries like India. Global warming is not just a global problem — for them, they will have some of the hottest spots” on the planet. In fact, a separate study by researchers at the University of California at Irvine and elsewhere, published recently also in Scientific Advances, reached similar conclusions based on a different kind of analysis using recent weather records.

That paper was “complementary to ours, which is based on modeling,” Eltahir says. The new analysis looked at results from three of the more than 20 comprehensive global climate models, which were selected because they most accurately matched actual weather data from the South Asian region. The study shows that by century’s end, absent serious reductions in global emissions, the most extreme, once-in-25-years heat waves would increase from wet-bulb temperatures of about 31 C to 34.2 C. “It brings us close to the threshold” of survivability, he says, and “anything in the 30s is very severe.”

In today’s climate, about 2 percent of the Indian population sometimes gets exposed to extremes of 32-degree wet-bulb temperatures. According to this study, by 2100 that will increase to about 70 percent of the population, and about 2 percent of the people will sometimes be exposed to the survivability limit of 35 degrees. And because the region is important agriculturally, it’s not just those directly affected by the heat who will suffer, Eltahir says: “With the disruption to the agricultural production, it doesn’t need to be the heat wave itself that kills people. Production will go down, so potentially everyone will suffer.”

But while the study provides a grim warning about what could happen, it is far from inevitable, Eltahir stresses. The study examined not just the “business as usual” case but also the effects under a moderate  mitigation scenario, which showed that these dramatic, deadly effects can still be averted. “There is value in mitigation, as far as public health and reducing heat waves,” he says. “With mitigation, we hope we will be able to avoid these severe projections. This is not something that is unavoidable.”

“This study provides vitally important information for planning for a hot, wet future in South Asia,” says Matthew Huber, a professor of earth, atmospheric, and planetary sciences at Purdue University, who was not involved in this research  “The results are impressive and, frankly, oppressive,” he says. “The study shows that unfettered warming is likely to do substantial harm to the health and well-being of the most populous democracy on Earth. This is very bad news.”

The research was supported by the National Research Foundation Singapore through the Singapore-MIT Alliance for Research and Technology (SMART).

Graduate student Shekhar Chandra cites the work of Prof. Elfatih Eltahir in an article for CNN about the rising temperatures in India. “Experts at MIT say that even if the world succeeds in cutting carbon emissions, limiting the predicted rise in average global temperatures, parts of India will become so hot they will test the limits of human survivability,” writes Chandra.

BBC News reporter Matt McGrath writes that MIT researchers have found climate change could cause deadly heat waves in South Asia by the end of the century. "This is something that is going to impact your most vulnerable population in ways that are potentially pretty lethal,” explains Prof. Elfatih Eltahir. “But it is avoidable, it is preventable."

Justin Worland reports for TIME on a new study by MIT researchers that shows by the end of the century millions of people living in South Asia could experience temperature and humidity conditions that exceed habitable levels. “The disastrous scenario could be avoided if countries meet their commitments to keep temperatures from rising more than 2°C (3.6°F) by 2100.”

AP reporter Katy Daigle writes that climate change could drive heat and humidity to extremes in regions of South Asia. Daigle explains that, “with no limit on global warming, about 30 percent of the region could see dangerous wet bulb temperatures above 31 degrees C (88 degrees F) on a regular basis within just a few decades.”

Writing for The Guardian, Damian Carrington highlights a new study by Prof. Elfatih Eltahir that shows that without reductions in carbon emissions, millions of people living in South Asia could face extreme heatwaves. “The problem is very alarming but the intensity of the heatwaves can be reduced considerably if global society takes action,” says Eltahir.

Washington Post reporter Chelsea Harvey writes that MIT researchers have found that millions of people in South Asia could experience deadly heat waves by the end of the century. Without reductions in greenhouse gas emissions, “certain areas of South Asia are projected to occasionally experience extreme conditions exceeding the lethal threshold, including parts of northeastern India and Bangladesh.”

MIT researchers have found that by 2100, climate change could cause deadly heat waves in parts of South Asia, reports Chris Arsenault for Reuters. “Climate change is not an abstract concept, it is impacting huge numbers of vulnerable people,” explains Prof. Elfatih Eltahir. “Business as usual runs the risk of having extremely lethal heat waves.”

A new study by MIT researchers finds that climate change could cause deadly heat waves in South Asia by the end of the century, reports Nicole Riva for CBC News. The research demonstrates what could happen if “we keep going in this trajectory of no action related to climate change or minimal action,” says Prof. Elfatih Eltahir.