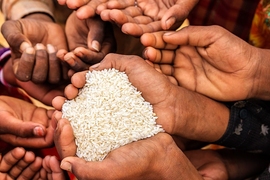 ↓ Download Image
Caption: About 30 percent of Indonesia’s households are supposed to receive subsidized rice from the government every month as part of a huge program called “Raskin,” or “Rice for the Poor.” The study shows that the amount of rice the villagers actually receive increases 26 percent when they are sent a simple information card with program details.

Caption:
About 30 percent of Indonesia’s households are supposed to receive subsidized rice from the government every month as part of a huge program called “Raskin,” or “Rice for the Poor.” The study shows that the amount of rice the villagers actually receive increases 26 percent when they are sent a simple information card with program details.

Even for poor villagers in rural Indonesia, information is power.

That is the implication of a newly published study co-authored by MIT economists, which finds that recipients of government aid collect more of the goods intended for them when they know more about the aid program they’re enrolled in.

About 30 percent of Indonesia’s households are supposed to receive subsidized rice from the government every month as part of a huge program called “Raskin,” or “Rice for the Poor.” As the study shows, the amount of rice the villagers actually receive increases 26 percent when they are sent a simple information card with program details.

“The main result, which in some sense I think is very surprising, is that just sending out the cards to people substantially increases the amount of rice that households get,” says Benjamin Olken, a professor of economics at MIT and co-author of the new paper. “Having that tangible information, having that proof, is very important.”

A key reason for this is that additional information provides a form of bargaining power. Not only do poor villagers know how much rice they should collect, and the extent of the subsidy, but when information cards are mailed out, local political leaders and other intermediaries also know that the aid recipients understand what they should be receiving.

“The village heads now know that the villagers know what they’re entitled to,” Olken observes. “Knowing that everyone else has this knowledge makes a big difference.”

The paper, “Tangible Information and Citizen Empowerment: Identification Cards and Food Subsidy Programs in Indonesia,” is published in the newest issue of the Journal of Political Economy.

The co-authors are Abhijit Banerjee, the Ford Professor of International Economics at MIT; Rema Hanna, a professor at the Harvard Kennedy School; Jordan Kyle, an associate research fellow at the International Food Policy Institute; Olken; and Sudarno Sumarto of the National Team for the Acceleration of Poverty Reduction (TNP2K), a government agency in Indonesia.

To conduct the study, the academic researchers worked with the TNP2K agency after the Indonesian government decided to investigate ways to make the Raskin program more effective. Earlier research had shown that significant portions of the rice were getting diverted before reaching the needy citizens who were part of the program.

“Some substantial amount of rice was getting lost somewhere,” Olken says.

The research involved 572 villages spread over three provinces in Indonesia. The study randomly selected 378 of the villages, where residents were sent a variety of information cards with factual details about the program. The other 194 villages were not sent information cards, and were used as a control group against which the program’s effects could be measured.

The scholars then surveyed village households at three intervals (two months, eight months, and 18 months) after the information campaign began, to find out whether the intervention had made a difference.

The research team found that not only did the program increase the amount of rice received by 26 percent, but the gains were made despite the fact that a significant portion of the information cards — nearly 70 percent — were being diverted at first, meaning that the increased quantity of rice per household that received the cards was higher than 26 percent.

Because the information on the cards varied, the researchers could also chart which kinds of notices had the most impact. People in the Raskin program typically have co-pay fees, since the rice is only partially subsidized. Without the intervention, beneficiaries pay 42 percent more in co-pay fees than they actually owe. But villagers received substantially more subsidized rice when the information cards explicitly mentioned the co-pay fees.

“It really is about the information per se,” Olken observes. “Just one extra line here substantially increased the amount of rice people got.”

As the researchers see it, the overall improvement can be interpreted as an increase in implicit bargaining leverage for the recipients of Raskin aid. As the authors write in the paper, “bargaining is at least one important channel through which cards are improving outcomes.” This does not necessarily mean, Olken explains, that face-to-face negotiations between villagers and rice distributors have drastically changed, but that the information program provides more leverage for villagers in the first place.

“Having that tangible information, having that proof, may be very important in changing the bargaining process,” Olken says. “You don’t have to complain for this to have an effect.”

This is why the scholars think of the cards as providing “tangible information.” The amount of “leakage” of rice, that is, the amount not delivered to intended recipients, improved at levels ranging from 33 to 58 percent among the villages in the survey, depending on the precise intervention. Moreover, the government of Indonesia incorporated the study’s findings into its decision to scale up the program, distributing identification cards that allow people representing 15.5 million households — 65.7 million people all told — to collect rice from the Raskin proram as well as other government services.

Other scholars in the field say the results are intriguing, both experimentally and as suggesting a policy tool that could be adapted more broadly.

In addition to the collaboration with the Indonesian government, funding for the study came from the Australian government through its Poverty Reduction Support Facility, and from a National Science Foundation Graduate Research Fellowship.

Profs. Abhijit Banerjee and Benjamin Olken speak with NPR’s Jason Beaubien about their efforts to improve Indonesia’s Raskin, or Rice for the Poor, program. "There's a certain tendency among both social scientists and policymakers to assume that the solution to a complex problem has to be complex,” says Banerjee, “and I don't think that's always true."

3 Questions: Benjamin Olken on the economic impact of climate change

The economic cost of increased temperatures