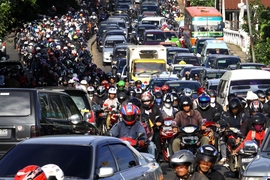 Cities plagued with terrible traffic problems may be overlooking a simple, low-cost solution: High-occupancy vehicle (HOV) policies that encourage carpooling can reduce traffic drastically, according to a new study co-authored by MIT economists.

“Eliminating high-occupancy vehicle restrictions led to substantially worse traffic,” says Ben Olken, a professor of economics at MIT and co-author of a new paper detailing the study. “That’s not shocking, but the magnitudes are just enormous.”

Moreover, when the HOV policy was ended, traffic suddenly became significantly worse on surrounding roads as well. Instead of siphoning more traffic onto the central roads, the policy change made congestion worse all over.

“HOV policies on central roads were making traffic everywhere better, both during the middle of the day and on these other roads during rush hour,” Olken observes. “That I think is a really striking result.”

The paper, “Citywide effects of high-occupancy vehicle restrictions: Evidence from ‘three-in-one’ in Jakarta,” is being published today in the journal Science. The authors are Olken; Gabriel Kreindler, a doctoral candidate in development economics in the MIT Department of Economics; and Rema Hanna, the Jeffrey Cheah Professor of South-East Asia Studies at the Harvard Kennedy School. Olken is the corresponding author.

In an effort to reduce its notoriously bad traffic problems, Jakarta installed its HOV regulations in 1992, using a “three-in-one” policy that required three passengers in each vehicle on some major roads, between 7 and 10 a.m. and between 4:30 and 7 p.m. However, it suddenly scrapped the policy in 2016 — first for a week, then for a month, and then permanently.

The HOV system had drawn its share of critics locally, in part due to the presence of “jockeys” on the roads — people charging a small fee to drivers who would let them ride in their cars, bringing vehicles up to the three-person requirement. Commuters would typically pick up jockeys at the edges of the HOV area. This led onlookers to question whether the HOV policy really was reducing the number of vehicles effectively, since it seemed to limit the amount of ride-sharing by actual commuters.

“For a long time, people were skeptical of the policy because of the existence of these jockeys,” says Kreindler.

When the Jakarta government suddenly announced the policy change in late March 2016, however, it gave the researchers an ideal opportunity to conduct a before-and-after natural experiment. The team queried Google Maps data starting in late March, before the policy went into effect, and then continued monitoring its impact into June 2016.

“The key thing we did is to start collecting traffic data immediately,” Hanna explains. “Within 48 hours of the policy announcement, we were regularly having our computers check Google Maps every 10 minutes to check current traffic speeds on several roads in Jakarta. ... By starting so quickly we were able to capture real-time traffic conditions while the HOV policy was still in effect. We then compared the changes in traffic before and after the policy change.”

As the researchers acknowledge, the precise mechanism for the spillover effect of eliminating HOV lanes — the fact that traffic got worse on surrounding roads — could use further investigation. After all, intuitively, it might seem that discarding the HOV policy on major streets would lessen the amount of traffic on nearby roads.

The scholars suggest a few potential reasons for this larger effect. The most direct is that the HOV-lane policy, when in effect, reduced the overall number of cars on the roads by encouraging car-sharing — and the ensuing, post-HOV conditions simply increased overall traffic levels everywhere.

Another possibility is that ending the HOV policy may have led to “hypercongestion,” in which traffic clogs became so bad that the total volume of vehicles on the major arteries dropped, such that more people drove on the surrounding streets, leading to more tie-ups there too. Still another hypothesis would be that there was a slightly less dramatic but still-consequential spillover of vehicles from Jakarta’s central business district to feeder streets.

Whatever the case, Olken says, the empirical effect is genuine.

“The point of this paper is to show that in a real-world natural experiment, this is what happens,” Olken says.

Kreindler, who is planning further traffic studies in other cities, notes that the sudden change in Jakarta’s HOV policies gives more weight to the findings, since it reduces the possibility that other factors were at work.

“The fact that it was unexpected means that the changes we’re looking at, before and after, are really due to the policy and not some other development that would also affect how much people would want to drive,” Kreindler says.

To be sure, the scholars note, all cities are different, and the results of similar changes might vary in magnitude elsewhere, depending on many factors, from the format of the urban area to the amount of public transit available.

Still, the result seems directly of interest to urban planners and policymakers, especially because of the low-cost nature of implementing HOV policies, whether on entire streets or certain lanes of large streets. All a city really needs, after all, are some signs, some paint for markings, and some enforcement of the policy.

“I don’t think we should necessarily take the result and wildly apply it everywhere, but [given] the kind of really serious congestion problems Jakarta has, it suggests this is a policy measure that has the potential to work,” Olken says.

Prof. Ben Olken speaks with BBC News reporter Gareth Mitchell about how the cancellation of high-occupancy vehicle (HOV) lanes impacted traffic in Jakarta, Indonesia. Olken and his colleagues found that in addition to traffic substantially increasing in areas that previously had HOV lanes, without the carpool lanes, “traffic gets worse all over the city.”

A study by MIT researchers shows that carpool lanes can help reduce a city’s traffic, reports Matt McFarland for CNN. The researchers found that the removal of HOV lanes increased driving times across Jakarta, Indonesia. "The magnitude was enormous and more than I would've expected," says Prof. Ben Olken.

Los Angeles Times reporter Karen Kaplan writes that a new study by MIT researchers provides evidence that high-occupancy vehicle lanes can reduce traffic. The researchers found that when a carpool policy in Jakarta, Indonesia was canceled, there was a “46% increase in commuting time in the morning and an 87% increase in the evening.”