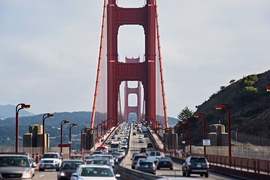 ↓ Download Image
Caption: Researchers tracked tens of thousands of taxis in New York, San Francisco, Singapore, and Vienna and found that over 90% of rides more than 5 minutes in duration could be fairly easily shared.

Caption:
Researchers tracked tens of thousands of taxis in New York, San Francisco, Singapore, and Vienna and found that over 90 percent of rides that are more than 5 minutes in duration could be fairly easily shared.

A newly published study co-authored by MIT researchers suggests that urban ride-sharing is feasible in a wide variety of cities around the globe — and indeed that the potential “shareability” of autos in those places is more similar, from place to place, than previously expected.

The work builds on a 2014 study showing that ride-sharing — in the form of, say, taxi trips shared with other passengers traveling along similar routes — could be highly effective in New York City. However, given New York’s exceptional population density, an ongoing question is how many other urban settings offer the same potential for sharing vehicles.

The new study examines data from San Francisco, Singapore, and Vienna, in addition to New York. It suggests the ride-sharing potential in those cities converges so closely that, as the study authors write, “they all obey the same empirical law governing the potential for ride-sharing.”

“We found this kind of global law of ride-sharing,” says Carlo Ratti, director of MIT’s Senseable City Lab and a co-author of the new paper.

The paper, “Scaling Law of Urban Ride Sharing,” is being published today in Scientific Reports.

The Senseable City researchers also teamed with Strogatz, who is the Jacob Gould Schurman Professor of Applied Mathematics at Cornell, on the earlier study focused on New York.

The researchers based the study on taxi data from the four cities, including the tracking of over 13,000 New York taxis for a year. They also tracked, for a month apiece, about 500 taxis in San Francisco, about 16,000 in Singapore, and about 1,000 in Vienna.

The research uses factors such as the area of a city, the number of taxi trips made, and the average traffic speed, to determine what proportion of rides are shareable, given some modest assumptions about the flexibility passengers might have in terms of waiting for a ride.

Santi says he found the result to be “particularly surprising” because “the cities we studied have very different layouts.” He adds: “The possible explanation … is that what influences shareability is the way our lives are organized, rather than the city layout.”

That is, despite the relatively lower density of a city such as Vienna, the potential for ride-sharing is still high due to similar daily mobility patterns among area residents.

Based on the model developed from the data for New York, San Francisco, Singapore, and Vienna, the paper also provides additional estimates of the ride-sharing potential in 30 cities around the world. The researchers estimate that Berlin and London would be on the low end of the shareability spectrum, while other, more dense cities — including Amsterdam and Prague — have better sharing possibilities.

To be sure, as Ratti acknowledges, the growth of ride-sharing depends on many factors, include a willingness of passengers to engage in it more often.

“How shareability turns into real sharing depends on culture,” Ratti says. Even given similar urban characteristics, he says, “In some countries you might find more sharing than in other countries.”

But as the paper notes, the growing presence of ride-sharing services such as UberPool, ZipCar, and Car2Go all indicate that ride-sharing may become a larger part of the urban transportation mix. In turn, that might ease congestion and environmental effects of heavy auto use.

“Today [individual] cars are used only 5 percent of the time,” Ratti says. “So if we’re able to change those numbers a little bit, the impact could be big.”

A study co-authored by Prof. Carlo Ratti finds ride-sharing is feasible in different cities around the world, reports Eleanor Cummins for Popular Science. “The key thing is how this can transform our cities. Every car you remove from the road, you are removing pollution and traffic,” explains Ratti.