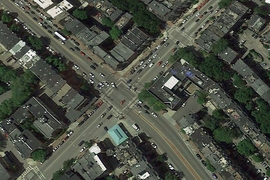 ↓ Download Image
Caption: “An intersection is a difficult place, because you have two flows competing for the same piece of real estate,” Carlo Ratti says.

Caption:
“An intersection is a difficult place, because you have two flows competing for the same piece of real estate,” Carlo Ratti says.
Credits:
Image: Google Earth

Imagine a scenario where sensor-laden vehicles pass through intersections by communicating with each other, rather than grinding to a halt at traffic lights. A newly published study co-authored by MIT researchers claims this kind of traffic-light-free transportation design, if it ever arrives, could allow twice as much traffic to use the roads.

The study is based on mathematical modeling. The researchers examined a scenario in which high-tech vehicles use sensors to remain at a safe distance from each other as they move through a four-way intersection. By removing the waits caused by traffic lights, these so-called Slot-based Intersections (SIs) speed up traffic flow.

“An intersection is a difficult place, because you have two flows competing for the same piece of real estate,” says Carlo Ratti, a professor of the practice and director of the SENSEable City Lab in MIT’s Department of Urban Studies and Planning, and a co-author of the study. But a system with sophisticated technology and no traffic lights, he adds, “moves control from the [traffic] flow level to the vehicle level. Doing that, you can create a system that is much more efficient, because then you can make sure the vehicles get to the intersection exactly when they have a slot.”

The greater capacity of the system, notes Paolo Santi, a researcher in the SENSEable City Lab who is a member of the Italian National Research Council and another co-author of the study, does not stem from vehicles moving more quickly. Rather, it comes from creating a more consistent flow at an optimal middle speed, at which automobiles can keep moving.

“You want the car to use the intersection for the shortest possible time,” Santi says.

The paper, “Revisiting street intersections using slot-based systems,” appears in the journal PLOS One. In addition to Ratti and Santi, the paper’s co-authors are Remi Tachet and Stanislav Sobolevsky, also of the SENSEable City Lab; Luis Ignacio Reyes-Castro and Emilio Frazzoli of MIT’s Laboratory for Information and Decision Systems; and Dirk Helbing of the Swiss Federal Institute of Technology in Zurich (ETH Zurich).

The “slower is faster” approach

To see why the system could at least work in theory, consider what the researchers call the “slower is faster” effect. When passengers board an airplane, they tend to move faster if they are in smaller clusters that keep going steadily, as opposed to a scenario in which everyone crowds around the entrance, creating a giant bottleneck.

“The ‘slower is faster’ effect has been observed in many other contexts related to flow of entities, for instances pedestrians through a narrow space,” Santi explains.

As pertains to automotive traffic, Santi continues, “If you need to slow down the vehicles because there is a lot of traffic, you slow them down early in the road, so they approach the intersection at slow speed, but then when they cross, you use the best speed.”

By “early,” Santi means that control of intelligent vehicles in the proposed system would occur not just at intersections but on the road segments leading to them. The modeling in the paper also finds that the most efficient traffic flow puts vehicles together in batches — like those smaller groups of passengers boarding a plane — and then slides them through the intersection accordingly.

“It’s like you use build the phases of a traffic light dynamically,” Santi says.

A city of slot cars

If the key to a light-free, enjoyably efficient traffic intersection is controlling the speeds of cars as they approach intersections, however, it raises further questions. In many cities, intersections with lights are often placed relatively close to each other. So how would the dynamics of traffic at one intersection propagate through a whole urban network of roads?

Ratti acknowledges the centrality of this issue and says it is currently the subject of additional study by some of the same researchers.

“If you start from the intersection, this propagates to the city level,” he says. “Part of the work we’re doing is studying that propagation.”

Boston Globe reporter Kevin Hartnett writes about a new study co-authored by MIT researchers that envisions a future without traffic lights. “When sensor-laden vehicles approach an intersection, they can communicate their presence and remain at a safe distance from each other, rather than grinding to a halt at traffic lights,” explains Prof. Carlo Ratti.

Popular Science reporter Kelsey Atherton writes that MIT researchers have developed a model that would allow cars to travel through intersections by communicating with one another, eliminating the need for traffic lights. “Rather than traffic lights working as valves dictating which stream can flow, the cars themselves are adjusted, cleanly separated and passed along,” Atherton explains.