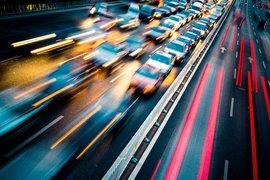 ↓ Download Image
Caption: The DriveWell app runs in the background of a smartphone, collecting data on driving behavior. Drivers receive a score on a scale from 1 to 100, a route map, and tips for improvement. Scores can also be used for insurance discounts, or to compete with friends and other drivers worldwide.
Credits: Courtesy of Cambridge Mobile Telematics 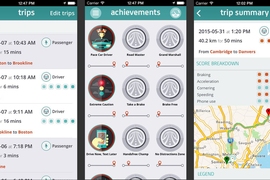 ↓ Download Image
Caption: The DriveWell app runs in the background of a smartphone, collecting data on driving behavior. Drivers receive a score on a scale from 1 to 100, a route map, and tips for improvement. Scores can also be used for insurance discounts, or to compete with friends and other drivers worldwide.
Credits: Courtesy of Cambridge Mobile Telematics

Caption:
The DriveWell app runs in the background of a smartphone, collecting data on driving behavior. Drivers receive a score on a scale from 1 to 100, a route map, and tips for improvement. Scores can also be used for insurance discounts, or to compete with friends and other drivers worldwide.
Credits:
Courtesy of Cambridge Mobile Telematics

Mobile-based telematics — apps and hardware that measure driving behaviors — may be the future of safer roads. Increasingly, people are using these technologies to improve their own driving habits, while insurance companies use the data to offer rewards and discounts to safe drivers.

One of the most prominent companies — and one of the first — in this market is Cambridge Mobile Telematics (CMT). Co-founded in 2010 by MIT professors Hari Balakrishnan and Sam Madden, CMT develops incentive-based apps for safe driving that are being used worldwide, with aims of making drivers better and roads safer.

DriveWell, CMT’s flagship app, is based on years of MIT research and runs in the background on a smartphone, collecting data to detect road types, driving smoothness, speeding, phone distraction, and other factors. Drivers receive a score on a scale from 1 to 100, along with route maps and tips for improvement. Scores can be used for insurance discounts and prizes while competing with friends and other drivers worldwide.

In South Africa, a version of the app has been used for a nationwide safe-driving contest, where tens of thousands of drivers competed for prizes. Results indicated that safe driving increased by more than 30 percent during the contest.

“Many people blame phones for causing accidents, but we are demonstrating the possibility of using smartphones to make driving safer,” says Balakrishnan, MIT’s Fujitsu Professor in Electrical Engineering and Computer Science.

According to the World Health Organization (WHO), around 1.25 million people worldwide die in traffic accidents annually, while somewhere between 20 and 50 million more suffer nonfatal injuries. The WHO also estimates that, without action, traffic accidents could become the seventh leading cause of death worldwide (moving from ninth) by 2030.

Over the years, CMT has collected promising data on the app’s effectiveness, and on driver safety in general. The startup has users in eight countries and is now partnered with a number of major insurance companies and service providers, including Discovery Insure of South Africa, Desjardins Insurance of Canada, Hellas Direct of Greece, and Towers Watson.

The startup has also developed an optional hardware component, called the DriveWell tag, which attaches to a car’s windshield and augments smartphone data. The tag also provides real-time crash detection and roadside assistance. When the tag detects an accident, it transmits data to the phone, and then to CMT’s servers. An operator from a call center then contacts with the driver to provide assistance.

CMT partnered with Discovery Insure, a leading telematics-based insurance provider, to launch the safe-driving competition in South Africa, in 2014 and 2015.

“This was a huge challenge for us, and one we relished because South Africa has one of the highest accident rates in the world,” Balakrishnan says.

The WHO reports that South Africa has 31.9 fatalities per 100,000 inhabitants annually from traffic accidents, one of the highest recorded rates worldwide.

More than 65,000 people participated in the South African competition for four months last year, and the app became one of the most downloaded iPhone apps in the country. Drivers earned points for safe driving and entered those points into a lottery for weekly rewards and a grand prize.

At the start of the contest, 81 percent of drivers said they were safe drivers — but the initial data indicated that only about 33 percent actually were. Within two weeks, CMT and Discovery found that unsafe speeding among the riskiest participants dropped by 40 to 50 percent. Participants also cut down their hard braking, cornering, and phone usage incidents by half. “The app helped drivers improve; the data shows that drivers with low scores [below 50] improved by 40 percent in just two days. This shows that safe drivers are made, not born,” Balakrishnan says.

The app’s effectiveness, Balakrishnan says, lies in incentives — not just insurance discounts, but also social games, feedback to drivers, leaderboards, badges, and friendly competitions for prizes. In this way, CMT hopes to pioneer positive behavioral incentives that recognize and reward an individual’s safe driving behaviors. Many of the app’s users, for instance, can already send regular updates on their driving scores to their insurance providers and receive adjusted quotes in real-time.

CMT is a spinout of CarTel, a project initiated in 2005 by Madden, a professor of electrical engineering and computer science, and Balakrishnan. Then at MIT’s Computer Science and Artificial Intelligence Laboratory (CSAIL), the researchers aimed to use mobile sensing and data analytics to improve road transportation.

Between 2005 and 2009, the CarTel project fitted many cars and taxis in Boston with small onboard computers that exchanged data wirelessly about delays, traffic jams, potholes, and hazardous road conditions. This gave drivers updates on traffic conditions and offered real-time alternative routes.

With the rise of smartphones preloaded with GPS and sensors for motion, vibration, and speed, the professors saw an opportunity to integrate their CarTel algorithms into devices that everyone was already carrying.

In 2011, through the MIT Industrial Liaison Program, the two professors connected with a large U.S. insurance company that ran extensive field tests of CMT’s smartphone-based telematics technologies. At the time, insurance firms were piloting dongles in on-board diagnostic systems for Usage-Based Insurance (UBI) programs. “We thought we could match what the dongles were measuring solely through phones,” Balakrishnan says. “But there were initial worries about generating inaccurate data and battery consumption.”

Soon, however, the app proved its mettle in multiple pilot programs and caught the attention of numerous insurance providers worldwide.

The app’s accuracy and low battery consumption, Madden adds, are the result of key innovations in signal processing and machine learning, made at MIT and CMT. Innovations include accurately estimating the dynamics of a vehicle from smartphone sensors, determining whether a user is a driver or passenger (or in a car at all), and detecting crashes in real-time, among other things.

With its technology now validated through papers, field tests, and international launches, CMT is focusing on rapid growth, Madden says: “The next stage of CMT is to bring our products and apps to millions of drivers.”

Prof. Hari Balakrishnan speaks with Forbes contributor Stuart Anderson about his decision to leave India to pursue a PhD in computer science in the U.S., his love for teaching students as a professor at MIT and his work co-founding Cambridge Mobile Telematics, a software company that utilizes technology to make roads safer. “Immigration and immigrants make the United States stronger,” said Balakrishnan. “Immigration is the biggest strength that we have. We need to be able to attract and retain talent, no matter where people come from.”

A report released by MIT startup Cambridge Mobile Telematics (CMT) shows that one in four drivers were using a smartphone just before an accident occurred, reports The Boston Globe’s Matt Rocheleau. Prof. Samuel Madden, founder and chief scientist at CMT, explains that the study shows “people are using their phones a lot, and that’s playing a role in the accidents.”

BBC reporter Lorelei Mihala highlights DriveWell, an app developed by Profs. Hari Balakrishnan and Sam Madden, aimed at addressing the problem of distracted driving. “We wanted to show that smartphones could be used to make drivers better,” says Balakrishnan.