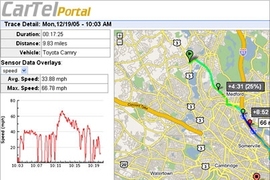 Dozens of cars in the Boston area are testing the latest generation of an MIT mobile-sensor network for traffic analysis that could help drivers cut their commuting time, alert them to potential engine problems and more.

In the CarTel project, Professor Hari Balakrishnan and Associate Professor Samuel Madden of MIT's Department of Electrical Engineering and Computer Science use automobiles to monitor their environment by sending data from an onboard computer -- which is about the size of a cell phone -- to a web server where the data can be visualized and browsed. They do so via pre-existing WiFi networks passed during a trip.

The resulting data, accessible from the web or a cell phone, not only helps a driver track conditions specific to their own car, but when combined with everyone else's can indicate historical and real-time traffic conditions at different times of the day. "Everybody's data is contributing to collective views of what congestion looks like," Madden said.

"Our goal," Balakrishnan said, "is to make the data behind CarTel available to help you plan and organize your commute and drives. We want to minimize the amount of time spent in your car."

For example, the current system, deployed since January on 50 Boston-area cars --Â including 40 taxis -- tracks traffic by monitoring each vehicle's speed at different points during a trip. Unlike other route-planning systems, "CarTel understands where traffic delays are and recommends routes to avoid them," Madden said.

The system has already cut Balakrishnan's commute to MIT by 25 percent. It recommended a new route that, although a few miles longer than the approach suggested by some mapping web sites, is considerably faster in practice.

CarTel is also linked to a vehicle's onboard diagnostics system (available in all cars sold since 1996), so a driver can check various parameters key to maintenance and be alerted to potential problems.

There are two principal research efforts behind the system. First, Balakrishnan, Madden and Jacob Eriksson (now at the University of Illinois, Chicago) developed a way to connect to WiFi networks that is 35 times faster than other systems. "It can take about 15 seconds to connect using a regular system, so in a car you are already past the WiFi location by the time you get the signal," Madden explained. QuickWiFi can connect in 360 milliseconds. "It's the difference between whether you can use WiFi with a car or not."

The majority of the work, however, is focused on managing the huge amounts of data key to the system. Depending on the sensors in use, CarTel can receive more than 600 data points a second. So the team has developed two generations of software "to synthesize all that data into interesting uses," Madden said.

One such use is new algorithms for traffic-aware routing, or obtaining directions between two locations that take historical and current traffic conditions into account. Balakrishnan and Madden have developed these algorithms with graduate student Sejoon Lim and Professor Daniela Rus, both of the Department of Electrical Engineering and Computer Science.

"CarTel makes it easy to collect, process, deliver and visualize data from a collection of remote, mobile and intermittently connected nodes," the researchers concluded in one of several technical articles and conference presentations on the work. Most recently, they described the research at the Association for Computing Machinery's Conference on Mobile Computing and Networking (MobiCom) in September 2008.

This work is funded by the National Science Foundation and the T-Party Project, a joint research program between MIT and Quanta Computer Inc.

A version of this article appeared in MIT Tech Talk on October 8, 2008 (download PDF).