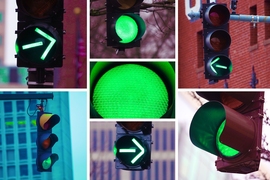 Sitting in traffic during rush hour is not just frustrating for drivers; it also adds unnecessary greenhouse gas emissions to the atmosphere.

Now a study by researchers at MIT could lead to better ways of programming a city’s stoplights to reduce delays, improve efficiency, and reduce emissions.

The new findings are reported in a pair of papers by assistant professor of civil and environmental engineering Carolina Osorio and alumna Kanchana Nanduri SM ’13, published in the journals Transportation Science and Transportation Research: Part B. In these papers, the researchers describe a method of combining vehicle-level data with less precise — but more comprehensive — city-level data on traffic patterns to produce better information than current systems provide.

“What we do,” Osorio says, “is develop algorithms that allow major transportation agencies to use high-resolution models of traffic to solve optimization problems.” Typically, such timing determinations are set to optimize travel times along selected major arteries, but are not sophisticated enough to take into account the complex interactions among all streets in a city. In addition, current models do not assess the mix of vehicles on the road at a given time — so they can’t predict how changes in traffic flow may affect overall fuel use and emissions.

For their test case, Osorio and Nanduri used simulations of traffic in the Swiss city of Lausanne, simulating the behavior of thousands of vehicles per day, each with specific characteristics and activities. The model even accounts for how driving behavior may change from day to day: For example, changes in signal patterns that make a given route slower may cause people to choose alternative routes on subsequent days.

While existing programs can simulate both city-scale and driver-scale traffic behavior, integrating the two has been a problem. The MIT team found ways of reducing the amount of detail sufficiently to make the computations practical, while still retaining enough specifics to make useful predictions and recommendations.

“With such complicated models, we had been lacking algorithms to show how to use the models to decide how to change patterns of traffic lights,” Osorio says. “We came up with a solution that would lead to improved travel times across the entire city.” In the case of Lausanne, this entailed modeling 17 key intersections and 12,000 vehicles.

In addition to optimizing travel times, the new model incorporates specific information about fuel consumption and emissions for vehicles from motorcycles to buses, reflecting the actual mix seen in the city’s traffic. “The data needs to be very detailed, not just about the vehicle fleet in general, but the fleet at a given time,” Osorio says. “Based on that detailed information, we can come up with traffic plans that produce greater efficiency at the city scale in a way that’s practical for city agencies to use.”

In short, Osorio says, “We take complex data and couple that with less-detailed data [to create] computer-friendly solutions that combine the two kinds of data to come up with practical solutions.”

Osorio adds, “Agencies are now being asked, whenever they propose changes, to estimate what impact that will have environmentally.” Currently, such evaluations need to be made after the fact, through actual measurements, but with these new software tools, she says, “We can put the environmental factors in the loop in designing the plan.”

The team now is working on a project in Manhattan, among other locales, to test the potential of the system for large-scale signal control.

In addition to timing traffic lights, in the future such simulations could also be used to optimize other planning decisions, such as picking the best locations for car- or bike-sharing centers, Osorio says.

Kai Nagel, a professor at the Technical University of Berlin who was not involved in this research, says this work “ties together the realism of detailed traffic microsimulators with the rigor of mathematical approximation models. The approach is both very sound and very recent. It is, even in the academic realm, a true innovation.”

Nagel adds that this research “addresses one of the most important problems faced by cities of today and the future,” and says these new findings open up “a wealth of future research opportunities.”