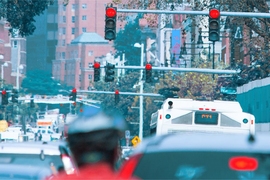 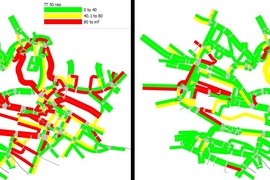 Anyone who has ever driven a city street and been frustrated by having to stop again and again for red lights has probably thought that there must be a better way. Now, researchers at MIT have developed a means of computing optimal timings for city stoplights that can significantly reduce drivers’ average travel times.

Existing software for timing traffic signals has several limitations, says Carolina Osorio, an assistant professor of civil and environmental engineering at MIT. She is lead author of a forthcoming paper in the journal Transportation Science that describes the new system, based on a study of traffic in Lausanne, Switzerland.

“Usually in practice, when you want to time traffic lights, traditionally it’s been done in a local way,” Osorio says. “You define one intersection, or maybe a set of intersections along an arterial, and you fine-tune or optimize the traffic lights there. What is less done, and is more difficult to do, is when you look at a broader scale, in this case the city of Lausanne, and you want to change signal times at intersections distributed across the entire city, with the objective of trying to improve conditions across the entire city.”

Such an expansive aim triggers complications, such as the ripple effect that a change at one intersection can produce across the surrounding area, or changes in driver behavior following changes in traffic-light patterns: For example, if wait times on a particular route increase, drivers may seek alternative routes that feature fewer red lights.

The new optimization process developed by Osorio and graduate student Linsen Chong can time traffic lights in large urban areas while accounting for the complex and diverse reactions of individual drivers. Their approach uses high-resolution traffic simulators that describe, in detail, the behavior of drivers in response to changes in travel conditions.

In detailed simulations of Lausanne’s traffic, they found that the timings produced by their approach reduced the average travel time for commuters by 22 percent, compared with timings generated by commercial traffic-light timing software.

Some cities currently make use of these high-resolution simulators, known as microscopic simulators: Behavior down to the level of individual drivers is simulated to estimate the impact of a given timing pattern. But the complexity of such models makes them computationally intensive. For instance, in the case of Lausanne, more than 12,000 individual drivers are simulated.

The new approach allows these models to be used in a practical and computationally efficient way. Other citywide models can be used to help determine proposed timings, but they treat traffic flow simplistically and homogeneously, rather than as a collection of individual travelers with distinct and complex behavior.

The new simulation-based optimization model proposed by Osorio and Chong aims to bridge these options, providing a detailed vehicle-level analysis but applying it to city-scale optimization.

The system, Osorio says, starts with a modest premise: “What if we combine information from these microscopic simulations with [citywide] information from these simple traffic models that are very computationally efficient and run instantly, but have very low resolution?” The approach combines the accuracy of high-resolution models with the computational efficiency of low-resolution traffic models.

The basic system, Osorio says, is also being applied toward different goals: Instead of just minimizing commuting times, it is also being used to minimize fuel consumption, and even to determine the optimal location for services such as vehicle-sharing hubs.

The work is currently being extended to help in the design of timing systems that can adapt to changing traffic conditions. Work on this topic is ongoing in collaboration with officials in New York City’s Department of Transportation, focusing on peak-period traffic in areas of Manhattan.

That agency’s Mohamad Talas, a deputy director of system engineering who was not involved in the research but is working with the MIT team on testing, says, “Such a model can validate our active traffic-management system in Manhattan, and allow us to fine-tune our processes and improve the network operation.”

Talas adds, “I believe that this approach is economically viable, with cost savings for any jurisdiction that needs to assess and improve traffic conditions for a large area of the transportation network.”