Study: Congestion can be alleviated throughout a metropolitan area by altering the trips of drivers in specific neighborhoods.
Denise Brehm, Civil and Environmental Engineering
Publication Date:
Press Inquiries 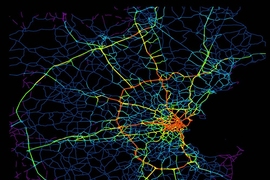 ↓ Download Image
Caption: The color of the road segments in this image represents the number of neighborhoods that are major sources of drivers for that segment. Red is more than 100, yellow is 61 to 100, green is 41 to 60, dark blue is 1 to 20 and purple is none.
Credits: Image: Pu Wang

Caption:
The color of the road segments in this image represents the number of neighborhoods that are major sources of drivers for that segment. Red is more than 100, yellow is 61 to 100, green is 41 to 60, dark blue is 1 to 20 and purple is none.
Credits:
Image: Pu Wang

Caption:
The color of the road segments in this image represents the number of neighborhoods that are major sources of drivers for that segment. Red is more than 100, yellow is 61 to 100, green is 41 to 60, dark blue is 1 to 20 and purple is none.
Credits:
Image: Pu Wang
In most cities, traffic growth has outpaced road capacity, leading to increased congestion, particularly during the morning and evening commutes. In 2007, congestion on U.S. roads was responsible for 4.2 billion hours of additional travel time, as well as 2.8 billion gallons of fuel consumption and an accompanying increase in air pollution.

One way to prevent traffic tie-ups is to have fewer cars on the road by encouraging alternatives such as public transportation, carpooling, flex time and working from home. But a new study — by researchers at MIT, Central South University in China, the University of California at Berkeley and the Austrian Institute of Technology — incorporates data from drivers’ cellphones to show that the adoption of these alternatives by a small percentage of people across a metropolitan area might not be very effective. However, if the same number of people, but from a carefully selected segment of the driving population, chooses not to drive at rush hour, this could reduce congestion significantly.

The study, published in the Dec. 20 issue of the journal Scientific Reports, demonstrates that canceling or delaying the trips of 1 percent of all drivers across a road network would reduce delays caused by congestion by only about 3 percent. But canceling the trips of 1 percent of drivers from carefully selected neighborhoods would reduce the extra travel time for all other drivers in a metropolitan area by as much as 18 percent.

“This has an analogy in many other flows in networks,” says lead research Marta González, the Gilbert W. Winslow Career Development Assistant Professor in MIT’s Department of Civil and Environmental Engineering and Engineering Systems Division. “Being able to detect and then release the congestion in the most affected arteries improves the functioning of the entire coronary system.”

The study, designed by González and former MIT postdoc Pu Wang, now a professor at Central South University, is the first large-scale traffic study to track travel using anonymous cellphone data rather than survey data or information obtained from U.S. Census Bureau travel diaries. Both of these are prone to error because of the time lag between gathering and releasing data and the reliance on self-reporting.

González and Wang used three weeks of cellphone data to obtain information about anonymous drivers’ routes and the estimated traffic volume and speed on those routes. They inferred a driver’s home neighborhood from the regularity of the route traveled and from the locations of cell towers that handled calls made between 9 p.m. and 6 a.m. They combined this with information about population densities and the location and capacity of roads in the networks of two metropolitan areas — Boston and San Francisco — to determine which neighborhoods are the largest sources of drivers on each road segment, and which roads these drivers use to connect from home to highways and other major roadways.

In the Boston area, they found that canceling 1 percent of trips by select drivers in the Massachusetts municipalities of Everett, Marlborough, Lawrence, Lowell and Waltham would cut all drivers’ additional commuting time caused by traffic congestion by 18 percent. In the San Francisco area, canceling trips by drivers from Dublin, Hayward, San Jose, San Rafael and parts of San Ramon would cut 14 percent from the travel time of other drivers.

“These percentages are averages based on a one-hour commute with additional minutes caused by congestion,” Wang says. “The drivers stuck in the roads with worst congestion would see the greatest percentage of time savings, because the selective strategy can more efficiently decrease the traffic flows in congested roads.”

To validate the study’s methodology, Alexandre Bayen, an associate professor of systems engineering at Berkeley, and graduate student Timothy Hunter compared González and Wang’s estimations of travel time based on cellphone data with their own data obtained from GPS sensors in taxis in the San Francisco area. Using GPS data, Bayen and Hunter computed taxis’ speed based on travel time from one location to another; from that speed of travel, they then determined congestion levels. Their findings agreed with those of González and Wang.

Because the new methodology requires only three types of data — population density, topological information about a road network, and cellphone data — it can be used for almost any urban area.

“In many cities in the developing world, traffic congestion is a major problem and travel surveys don’t exist,” González says. “So the detailed methodology we developed for using cellphone data to accurately characterize road network use could help traffic managers control congestion and allow planners to create road networks that fit a population’s needs.”

González and Wang are currently studying road use in the Dominican Republic, France, Portugal, Rwanda and Spain. They treat the anonymous cellphone data with the privacy-protection measures required for the treatment of human subjects under an institutional review board.

Katja Schechtner, head of the Dynamic Transportation Systems group at the Austrian Institute of Technology and a visiting scholar at the MIT Media Lab, is a co-author on the Scientific Reports paper with González, Wang, Bayen and Hunter.

“We are now at a time where it is less difficult to get mobility data, thanks to mobile phones and other devices, and the main problem we have is how to extract useful information from all these data,” says Marc Barthelemy, a senior researcher at the Institute of Theoretical Physics at CEA in France. “[González] and her team proposed a very interesting and new idea of constructing the network of road usage, which allows us to understand where individuals on a given road are coming from, and enables us to propose new strategies for mitigating congestion. This approach will certainly open new avenues of research in the very active field of mobility in urban systems.”

The study was funded by grants from the New England University Transportation Center, the NEC Corporation Fund, the Solomon Buchsbaum Research Fund and the National Natural Science Foundation of China. Wang received funding from the Shenghua Scholar Program of Central South University.

WBUR reporter Jack Lepiarz speaks with Prof. Marta Gonzalez about her traffic study that found that if drivers switched routes during rush hour they could cut back on congestion. “We have enough space, in theory, but we are all filling up a few streets that get congested,” Gonzalez explains.