Increasing fuel efficiency with a smartphone 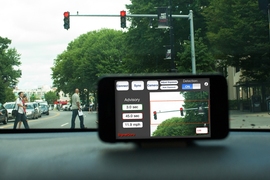 Caption:
Where previous experimental traffic-light advisory systems used GPS data or data from traffic sensors, SignalGuru uses visual data from cellphone cameras.
Credits:
Graphic: Christine Daniloff
In July, at the Association for Computing Machinery’s MobiSys conference, researchers from MIT and Princeton University took the best-paper award for a system that uses a network of smartphones mounted on car dashboards to collect information about traffic signals and tell drivers when slowing down could help them avoid waiting at lights. By reducing the need to idle and accelerate from a standstill, the system saves gas: In tests conducted in Cambridge, Mass., it helped drivers cut fuel consumption by 20 percent.

Cars are responsible for 28 percent of the energy consumption and 32 percent of the carbon dioxide emissions in the United States, says Emmanouil Koukoumidis, a visiting researcher at MIT who led the project. “If you can save even a small percentage of that, then you can have a large effect on the energy that the U.S. consumes,” Koukoumidis says.

The system is intended to capitalize on a growing trend, in which drivers install brackets on their dashboards so that they can use their smartphone as a GPS navigator while driving. But unlike previous in-car cellphone applications, the new system, dubbed SignalGuru, relies on images captured by the phones’ cameras. According to Koukoumidis, the computing infrastructure that underlies the system could be adapted to a wide range of applications: The camera could, for instance, capture information about prices at different gas stations, about the locations and rates of progress of city buses, or about the availability of parking spaces in urban areas, all of which could be useful to commuters.

Koukoumidis is a student of Li-Shiuan Peh, an associate professor in the Department of Electrical Engineering and Computer Science who came to MIT from Princeton in fall 2009. Koukoumidis came with her, and together they launched the SignalGuru project as part of the Singapore-MIT Alliance for Research and Technology’s Future Urban Mobility program. Koukoumidis’s other thesis advisor, Princeton’s Margaret Martonosi, is the third author on the MobiSys paper.

In addition to testing SignalGuru in Cambridge, where traffic lights are on fixed schedules, the researchers also tested it in Singapore, where the duration of lights varies continuously according to fluctuations in traffic flow. In Cambridge, the system was able to predict when lights would change with an error of only two-thirds of a second. In suburban Singapore, the error increased to slightly more than a second, and at one particular light in densely populated central Singapore, it went up to more than two seconds. “The good news for the U.S.,” Koukoumidis says, “is that most signals in the U.S. are dummy signals” — signals with fixed schedules. But even an accuracy of two and half seconds, Koukoumidis says, “could very well help you avoid stopping at an intersection.” Moreover, he points out, the predictions for variable signals would improve as more cars were outfitted with the system, collecting more data.

In addition to designing an application that instructs drivers when to slow down, the researchers also modeled the effect of instructing them to speed up to catch lights. But "we think that this application is not a safe thing to have," Koukoumidis says. The version of the application that the researchers used in their tests graphically displays the optimal speed for avoiding a full stop at the next light, but a commercial version, Koukoumidis says, would probably use audio prompts instead.

Koukoumidis envisions that the system could also be used in conjunction with existing routing software. Rather than recommending, for instance, that a car slow to a crawl to avoid a red light, it might suggest ducking down a side street.

“SignalGuru is a great example of how mobile phones can be used to offer new transportation services, and in particular services that had traditionally been thought to require vehicle-to-vehicle communication systems,” says Marco Gruteser, an associate professor of electrical and computer engineering in the Wireless information Network Laboratory at Rutgers University. “There is a much more infrastructure-oriented approach where transmitters are built into traffic lights and receivers are built into cars, so there’s a much higher technology investment needed.”

One obstacle to commercial deployment of the system, Gruteser says, could be “finding a way to get the participation numbers required for this type of crowd-sourcing solution. There’s a lot of people who have to use the system to provide fresh sensing data.” Additional traffic-related applications, of the type that Koukoumidis is investigating, could be one way to drive participation, Gruteser says, but they won’t emerge overnight. “The processing algorithms would be a little more complex,” Gruteser says.