The economic cost of increased temperatures 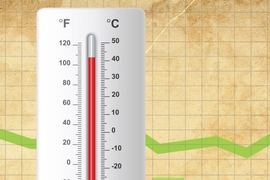 Credits:
Graphic: Christine Daniloff
Even temporary rises in local temperatures significantly damage long-term economic growth in the world’s developing nations, according to a new study co-authored by an MIT economist.

Looking at weather data over the last half-century, the study finds that every 1-degree-Celsius increase in a poor country, over the course of a given year, reduces its economic growth by about 1.3 percentage points. However, this only applies to the world’s developing nations; wealthier countries do not appear to be affected by the variations in temperature.

“Higher temperatures lead to substantially lower economic growth in poor countries,” says Ben Olken, a professor of economics at MIT, who helped conduct the research. And while it’s relatively straightforward to see how droughts and hot weather might hurt agriculture, the study indicates that hot spells have much wider economic effects.

“What we’re suggesting is that it’s much broader than [agriculture],” Olken adds. “It affects investment, political stability and industrial output.”

The paper, “Temperature Shocks and Economic Growth: Evidence from the Last Half Century,” was published this summer in the American Economic Journal: Macroeconomics. Along with Olken, the authors are Melissa Dell PhD ’12, of Harvard University, who was a PhD candidate in MIT’s Department of Economics when the paper was produced, and Ben Jones PhD ’03, an economist at Northwestern University.

The study first gained public attention as a working paper in 2008. It collects temperature and economic-output data for each country in the world, in every year from 1950 through 2003, and analyzes the relationship between them. “We couldn’t believe no one had done it before, but we weren’t really sure we’d find anything at all,” Olken says.

By looking at economic data by type of activity, not just aggregate output, the researchers concluded there are a variety of “channels” through which weather shocks hurt economic production — by slowing down workers, commerce, and perhaps even capital investment.

“If you think about people working in factories on a 105-degree day with no air conditioning, you can see how it makes a difference,” Olken says.

One consequence of this, borne out in the data, is that the higher temperatures in a given year affect not only a country’s economic activity at the time, but its growth prospects far into the future; by the numbers, growth lagged following hot years.

To see why, Olken suggests, first think of a dry year for vegetables in your backyard garden: The bad weather would hurt the plants, but if the weather is reasonable the following year, the backyard crop would return to its normal level. Now contrast that with problems that affect, say, industrial and technological development, and capital investment; temperature shocks limiting those activities can compound over time.

“If you think about economic growth, you build on where you were last year,” Olken explains. For longer-term industrial or technological projects, he adds, “If it’s that kind of activity that’s lost, then it affects the country’s long-run growth rate, [and it’s] not a one-off hit.”

Political change in the weather

Olken, Dell and Jones also integrated data about forms of government into the study, and found that temperature shocks are associated with an increase in political instability. A 1-degree-Celsius rise in a given year, they found, raises the probability of “irregular leader transitions,” such as coups, by 3.1 percentage points in poor countries. In turn, the authors write, “poor economic performance and political instability are likely mutually reinforcing.”

Olivier Deschenes, an economist at the University of California at Santa Barbara, calls the study “an important finding because most of the prior research on the economic impacts of climate change have focused on a few sectors of the economy, predominantly the agricultural sector.” By contrast, he notes, the broader finding of the current paper matters “because the growth rate is a key measure of the economic success of a nation and the standard of living of its population.”

Deschenes, who also conducts research on the economic and health effects of temperature changes, suggests that the “next step” for scholars “is to identify adaptation strategies that can moderate the negative impacts of global climate change in the coming decades.”

As Olken observes, the study does not try to account for all the possible problems that could be generated by long-term climate change, such as rising oceans, floods or increased storms. Still, he adds, the paper does suggest some general points about the economic impact of a warming atmosphere. It is vital, he says, to “think about the heterogeneity of the impact between the poor and rich countries” when leaders and policymakers map out the problems the world may confront in the future.

“The impacts of these things are going to be worse for the countries that have the least ability to adapt to it,” he adds. “[We] want to think that through for the implications for future inequality. It’s a double whammy.”