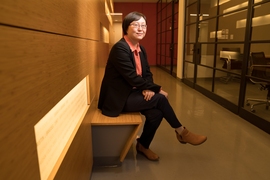 ↓ Download Image
Caption: Siqi Zheng is an associate professor in MIT’s Department of Urban Studies and Planning whose work examines the dynamic connections between what she calls urban “vibrancy” — economic and job growth, for instance — and urban “amenities,” such as transit, clean air, schools, housing, and restaurants.
Credits: Image: Bryce Vickmark 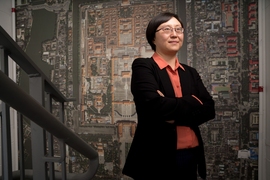 ↓ Download Image
Caption: Siqi Zheng is an associate professor in MIT’s Department of Urban Studies and Planning whose work examines the dynamic connections between what she calls urban “vibrancy” — economic and job growth, for instance — and urban “amenities,” such as transit, clean air, schools, housing, and restaurants.
Credits: Image: Bryce Vickmark

Caption:
Siqi Zheng is an associate professor in MIT’s Department of Urban Studies and Planning whose work examines the dynamic connections between what she calls urban “vibrancy” — economic and job growth, for instance — and urban “amenities,” such as transit, clean air, schools, housing, and restaurants.
Credits:
Image: Bryce Vickmark

In recent decades, China has built and expanded its cities on a scale never seen before in human history. Given the vast social, economic, and environmental changes that have resulted, it is tempting to say that contemporary China has been a laboratory of urbanization.

In fact, to Siqi Zheng, China’s cities are very much labs. Zheng is an associate professor in MIT’s Department of Urban Studies and Planning whose work examines the dynamic connections between what she calls urban “vibrancy” — economic and job growth, for instance — and urban “amenities,” such as transit, clean air, schools, housing, and restaurants.

The interplay between vibrancy and amenities can be complicated: Jobs and growth can create pollution, for example, which lowers the quality of urban life in one dimension, even as a city’s employment opportunities raise incomes. On the other hand, more far-sighted policies can bring amenities such as better transit, green parks, and affordable housing to cities in tandem with growth, and also attract talents who value such amenities.

In any such case, Zheng’s studies are characterized by a close examination of neighborhood-level or city-level conditions and the dynamics causing them. Or, as Zheng puts it, her work “uses individual choices and real estate to understand the driving forces behind values in the city.”

Those dynamics are a phenomenon Zheng and her co-author Matthew Kahn of the University of Southern California examined closely in their 2016 book, “Blue Skies over Beijing,” published by Princeton University Press, which explored urban change and air pollution.

As Kahn and Zheng found, the notoriously bad air pollution of China’s rapidly growing urban centers has created resistance among residents at multiple income levels. In particular, demands for a better urban quality of life from an ascendant middle class have led to pushback on existing policies. In the long run, Zheng and Kahn assert, China will move further in the direction of cleaner growth.

For her research and teaching, Zheng was hired with tenure by MIT in 2017. Her goals at the Institute include more research, continued teaching, and broadening the ties between her native country and her current home.

“I want to start more interaction between China and the U.S.,” Zheng says.

Actually, she already has: Last fall, MIT announced the formation of the China Future City Lab, an academic and entrepreneurial program headed by Zheng.

The lab, developed along with Tsinghua University in Beijing as well as corporate and governmental partners, has three main elements: It supports basic research on urban life in China; houses the MIT-Tsinghua Future City Innovation Connector (FCIC), which backs Chinese startup teams to launch pilot projects in Chinese cities; and works with Chinese cities that serve as “living labs” for ideas and innovations of MIT researchers.

In some ways, Zheng also personifies the expanding connections between China and the U.S. in recent decades. Zheng grew up in China and has spent the balance of her academic career there, as a student and professor. However, her intellectual formation owes a fair amount to her experiences in the U.S. academic world.

Zheng received a PhD in urban development and real estate from Tsinghua University, where she was closely focused on housing issues. But a stint as a postdoc at Harvard University’s Graduate School of Design made her want to analyze some of the larger connections in the urban fabric — between growth, jobs, transit, the environment, and more.

Thus what Zheng calls the “very vibrant academic environment” in the U.S. led to a career shift of sorts: “I got so interested in urban issues [that] I switched from housing to the whole urban subject.”

Zheng became a professor at Tsinghua University, as well as the director of the Hang Lung Center for Real Estate there. She is now in her second full year at MIT, where she is the Samuel Tak Lee Associate Professor of Real Estate, Development, and Entrepreneurship as well as faculty director of the China Future City Lab — in addition to her duties in the Samuel Tak Lee Real Estate Entrepreneurship Lab.

Even as she juggles new responsibilities, Zheng says she has quickly felt at ease on the MIT campus.

Certainly Zheng ranges widely as a scholar in urban studies. In the time since her book was published, Zheng has co-authored papers with an array of findings about urban life. For instance, while examining the effects of public transit on pollution, she found that in the city of Changsha, neighborhood-level carbon monoxide pollution has dropped 18 percent in places where a new subway stop has opened.

Another study Zheng co-authored that was published last year shows that in China, the development of industrial parks has significant local economic spillover effects: For more than a mile beyond the boundaries of industrial parks, there are significant increases in productivity, wages, employment, home sales, and retail activities.

So what is next for Zheng? For now, she intends to pursue more of these kinds of studies. But in the long run, Zheng notes, she would like to broaden her urbanism projects to include other countries and continents.

“I want to generalize the lessons,” Zheng says. “I don’t want to just use China as a case study.”

At the moment, though, the rapid changes in China are providing her with a wealth of material to examine and questions to raise — and they keep her from thinking that she has a comprehensive understanding of some very complex urban situations.

“I still have a lot to learn,” says Zheng.