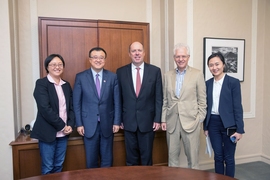 FCIC will draw upon the work of MIT professors and labs to identify innovative concepts and technologies that could be implemented in China. At MIT, FCIC will be formally hosted in the MIT China Future City Lab. Its founder and faculty director is Siqi Zheng, the Samuel Tak Lee Associate Professor of Real Estate Development and Entrepreneurship, in MIT’s Department of Urban Studies and Planning and its Center for Real Estate. Zheng also holds a visiting professor position at Tsinghua University.

The program will run in conjunction with the MIT School of Architecture and Planning’s entrepreneurship accelerator, DesignX. FCIC will also work extensively with Chinese municipal governments and industry leaders to support research and startup teams.

“I am thrilled to see the launch of this new collaboration initiative,” Schmidt says. “Under the leadership of Professor Zheng, the MIT-Tsinghua Future City Innovation Connector will become the new starting point of a series of engagements between MIT and Tsinghua in entrepreneurship, education, and urban research.”

As Zheng also noted, FCIC can play a significant practical role by linking together researchers and entrepreneurs, on the one hand, with Chinese policymakers and industrial leaders. The project aims to establish collaborations with Chinese cities that face challenges such as urban resilience, urban health, housing, environmental sustainability, responsive urban management, and the development of “smart” cities.

“Urban-focused research teams and startups face unique challenges when they want to work on urban problems in China,” Zheng adds. “Partnerships with city governments are most critical to the success of these teams. The MIT-Tsinghua Future City Innovation Connector will help the innovative urban research teams and startups at MIT and Tsinghua engage with the Chinese market and government resources to realize their societal impact and economic success.”

FCIC is the first program of its kind that explicitly aims to apply the frontiers of urban research and technology to the immense urbanization occuring in China, which should be powered by technological innovation and new business ventures, FCIC leaders believe.

“The rich academic intellectual resources and active entrepreneurship ecosystem at both universities have huge potential to land its impact in Chinese cities,” Bin Yang says. “MIT-Tsinghua FCIC will build broad partnership with local city and industries to scale up its impact. It is of great meaning to MIT, Tsinghua University, local governments, and industry leaders.”

MIT and Tsinghua University have developed extensive formal collaborations in recent decades, across a range of areas involving their shared commitment to research, education, and the support of entrepreneurship.