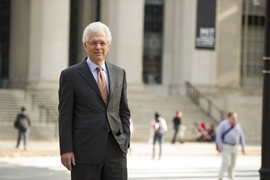 At a time of great societal challenges worldwide, MIT has released for comment a new plan for global engagement, outlining a framework for the Institute’s burgeoning international activities in education, research, innovation, and service.

The report, “A Global Strategy for MIT,” identifies core principles to help guide the Institute’s future international activities, and proposes several new initiatives to promote these activities, both on campus and around the world.

Provost Marty Schmidt, in introducing the report at a faculty forum on May 15, expressed the hope that it would stimulate discussion by the MIT community and invited comments on the report’s findings and recommendations.

“MIT’s international activities have been growing rapidly, and further growth is likely,” the report states. “The plan is designed to create a more robust and durable platform to support the international initiatives of individual faculty, while also establishing a principled framework for selecting and undertaking larger-scale activities to increase MIT’s impact in the world.”

Among its recommendations, the report calls for new efforts to cultivate and coordinate faculty- and Institute-level collaborations in different regions of the world. While MIT will likely increase its engagement in many countries, the plan specifically calls for an increased focus on China, Latin America, and Africa — places that “have been underrepresented in the MIT portfolio of activities previously and that have high potential for impactful engagement.”

Additional recommendations are designed to continue building out MIT’s distinctive “global classroom,” which already provides many opportunities for students to learn about the world through hands-on projects that solve practical problems. Another recommendation calls for a more steamlined approach to helping build new institutions and capabilities in other countries. The plan also calls for a review of the cap on international undergraduate admissions.

MIT already has a global character; its campus community of more than 20,000 includes about 6,500 faculty, academic staff, and students from about 150 foreign countries. About 43 percent of faculty, 43 percent of graduate students, and 65 percent of postdocs are from outside the U.S.

These figures have risen significantly within the last two decades: International students accounted for 75 percent of the increase in MIT’s graduate student population since 1998, and 80 percent of the growth in the Institute’s postdoctoral population since 2006. International sponsorship of research and other campus activities has grown threefold over the last decade, and accounted for 18 percent of all such activity at MIT in 2016.

Meanwhile, MIT faculty and students are engaged in research, education, and service projects in 75 countries. Half of graduating MIT seniors in 2016 reported having at least one international educational experience, up from 23 percent in 2006.

MIT’s orientation toward innovative solutions, exemplified by its current “Campaign for a Better World,” will continue to encourage projects in other countries, in areas including health, energy, the environment, education, and water access.

The new plan’s recommendation to strengthen MIT’s regional outreach — “MIT Partnerships for a Better World,” as the plan calls them — includes three elements.

First, the report calls for faculty working groups, organized by geographic region, to provide strategic advice and create regional action plans. Second, the plan suggests that periodic MIT summit meetings in targeted regions will help establish new programs and connections.  And third, the plan calls for an expansion of international seed funds to support collaborative research and educational programs with faculty and institutions in these regions.

MIT is already a participant in high-level summits with leaders around the world. This week, MIT President L. Rafael Reif will be speaking at a forum in Saudi Arabia hosted by Khalid Al-Falih, head of the country’s Ministry of Energy, Industry and Mineral Resources.

(Al-Falih also spoke at MIT in June 2016, at a meeting of university and business leaders from Massachusetts. At that event, he discussed Saudi Arabia’s “Vision 2030” project, a new policy agenda aiming to diversify the country’s economy beyond oil, to other technologies as well as services, logistics, and tourism.)

As the new report outlines, MIT’s existing programs will continue to play a central role in its global strategy. For example, the MIT International Science and Technology Initiatives (MISTI) arranged almost 1,000 student internships in 30 countries in 2016 — representing a fourfold increase over the last decade. MIT’s OpenCourseWare website has received nearly 200 million visits from around the world since its launch in 2003, while 3.5 million learners, 75 percent of whom are from outside the U.S., have signed up for MITx courses since the launch of the edX platform in 2012. MIT is also continuing to develop a MicroMasters credential available to global learners in multiple fields.

The importance of MIT-style “bottom-up” enterprise

Lester emphasizes the importance of “bottom up” activities, driven by enterprising faculty and students, to the new global strategy.

“We must support and encourage and help those efforts grow,” Lester says. “But in addition, MIT sometimes seeks to act on a larger scale, in order to increase its impact. We can’t do everything and be everywhere in the world, and the new plan will help us think systematically about what we want to do, where we want to do it, and who we want to do it with.”

Finally, as the plan notes, MIT’s international activities are subject to geopolitical shifts and the possibility of “disruptive developments” around the world. Given the pace of global change, the plan states, another comprehensive strategic review should be undertaken in five years or less. But for now, Lester says, MIT’s commitment to global engagement is strengthening.

“Now is not the time to change course,” Lester says. “On the contrary, this is the time to affirm our commitment to working with others, across national borders, on the world’s most challenging problems. In a very fundamental sense, that is who we are.”

MIT community celebrates its many cultures