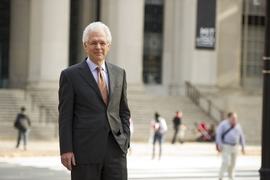 Richard Lester, the Japan Steel Industry Professor and currently the head of MIT’s Department of Nuclear Science and Engineering (NSE), has been named associate provost for international activities, effective July 1.

“In his new role, Richard will advise the administration on all matters pertaining to the Institute’s major international activities,” Schmidt wrote. “He will have responsibility for the periodic review of our ongoing global efforts as well as for the assessment of proposed international initiatives.”

A member of the faculty since 1979, Lester will be MIT’s first associate provost for international activities. Last November, President L. Rafael Reif announced that Claude Canizares would step down as vice president, effective June 30, and that oversight for international engagements, which had been part of his portfolio, would shift to a new position within the Office of the Provost.

“By many measures MIT is already a global university,” Lester says. “But what kind of a global university do we want to be? And how can we be a great global university in a way that strengthens our Cambridge campus as one of the world’s pre-eminent centers of scientific discovery and technological innovation? I am looking forward immensely to working on these very important questions for MIT with our faculty and with everyone who cares about the future of this great institution.”

In Lester’s six years as head of NSE, the department has seen rapid rebuilding and renewal. As the School of Engineering begins a search for his successor as department head, Lester will continue in that role until Sept. 1.

Lester is the faculty chair and founding director of the Industrial Performance Center. His research focuses on local, regional, and national systems of innovation, with a particular focus on the energy and manufacturing sectors. He has led several major studies of competitiveness and innovation performance commissioned by governments and industrial groups around the world.

Lester obtained his undergraduate degree in chemical engineering from Imperial College and earned his PhD in nuclear engineering from MIT in 1979. He serves as an advisor to corporations, governments, foundations, and nonprofit groups, and is chair of the National Academies’ Board on Science, Technology, and Economic Policy.

Claude Canizares to step down as vice president

How to kick-start new energy technologies