Claude Canizares to step down as vice president 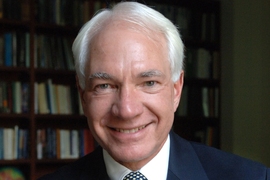 Claude Canizares will leave his post as an MIT vice president at the end of the current academic year, on June 30.

President L. Rafael Reif announced the news today in an email to the MIT community. Canizares, who is also the Bruno Rossi Professor of Physics  and associate director of the Chandra X-ray Observatory Center, will take a sabbatical after stepping down.

“For 40 years MIT has benefited from Claude’s exceptional commitment and service,” Reif wrote, adding: “Claude has excelled at making contributions that have touched nearly every corner of the Institute.”

A faculty member in the Department of Physics since 1974, Canizares joined MIT’s central administration in 2001 as associate provost; in 2006 he became vice president for research. Since January 2013, he has served as a vice president with responsibility for overseeing MIT’s expanding global engagements.

“MIT is an outstanding institution, thanks entirely to its remarkable people,“ Canizares says. “It has been my great privilege to serve three presidents and four provosts and work with a host of senior administration, faculty, and staff over the past 13 years.”

As vice president for research, Canizares oversaw MIT’s research and research-funding enterprise, as well as the Institute’s relationships with federal and corporate sponsors. He played a key role in establishing the MIT Energy Initiative, the Koch Institute for Integrative Cancer Research, and the Institute for Medical Engineering and Science. More recently, as MIT’s point person for international strategy, he has worked to develop and run MIT’s portfolio of global engagements, including those in Singapore, Russia, and Abu Dhabi.

During Canizares’ tenure, the Office of the Vice President for Research assumed primary responsibility for the Office of Sponsored Programs. Among other notable accomplishments as vice president for research, Canizares helped establish and oversee the Singapore-MIT Alliance for Research and Technology (SMART) and the MIT-Skoltech Initiative; took a leading role in initiating a consortium to build the new Massachusetts Green High Performance Computing Center in Holyoke; worked to improve the conditions of postdoctoral scholars; and fostered stronger ties between MIT’s main campus in Cambridge and Lincoln Laboratory.

Canizares holds a BA, MA, and PhD in physics from Harvard University. He came to MIT as a postdoc in 1971 and was appointed to the faculty three years later. Before joining MIT’s central administration, he served as director of the MIT Center for Space Research (now the Kavli Institute for Astrophysics and Space Research) from 1990 to 2002.

Canizares is an authority on high-resolution X-ray spectroscopy and plasma diagnostics of cosmic sources including supernova remnants, X-ray binaries, active galactic nuclei, and quasars. He led the development of the Chandra High-Resolution Transmission Grating Spectrometer on NASA’s Chandra X-ray Observatory.

Canizares is a member of the National Academy of Sciences and the American Academy of Arts and Sciences; has been honored for Meritorious Civilian Service to the United States Air Force; and has received two NASA Public Service Medals, as well as the Goddard Medal of the American Astronautical Society.

Moving forward, Reif wrote, oversight of MIT’s international engagements will shift to the Office of the Provost, with a new associate provost for international activities responsible for managing MIT’s international portfolio. Reif welcomed community input on this new position by email at associate.provost.search@mit.edu; all suggestions will be treated as confidential.