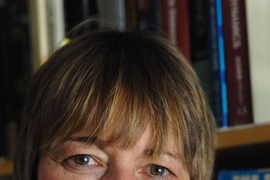 Maria T. Zuber, the E.A. Griswold Professor of Geophysics, will become MIT’s next vice president for research, President L. Rafael Reif announced today. Zuber chaired MIT’s Department of Earth, Atmospheric and Planetary Sciences from 2003 to 2011, and has held leadership roles associated with scientific experiments or instrumentation on nine NASA missions over the past two decades.

Claude R. Canizares, who has served since 2006 as MIT’s vice president for research and associate provost, has been tapped by Reif for a new vice presidential post with responsibility for MIT’s major international partnerships.

Reif made the announcement this morning in an email to the MIT community. Zuber and Canizares will assume their new roles effective Jan. 16.

Maria Zuber has been a member of the MIT faculty since 1995; she was previously on the faculty of Johns Hopkins University. She has also served, since 1994, as a senior research scientist at NASA’s Goddard Space Flight Center in Greenbelt, Md.

“Well-versed in the ways of Washington, with a deep awareness of the needs of world-class research teams, a broad understanding of the research enterprise at MIT and a proven ability to orchestrate complex processes and build effective teams, Professor Zuber is extraordinarily well-prepared to lead MIT in federal research policy and administration,” Reif said. “As uncertainty prevails around federal research funding, she will be a compelling advocate for farsighted federal investment in university research.”

As vice president for research, Zuber will be responsible for research administration and policy at the Institute. She will oversee more than a dozen interdisciplinary research centers, including the David H. Koch Institute for Integrative Cancer Research, the Plasma Science and Fusion Center, the Research Laboratory of Electronics, the Institute for Soldier Nanotechnologies, the MIT Energy Initiative (MITEI), and the Haystack Observatory. The vice president for research is also responsible for research integrity and compliance, and plays a central role in research relationships with the federal government.

“The research enterprise is the heart and soul of MIT,” Zuber said. “I am delighted to have the opportunity to shape the organization to be optimally responsive to faculty needs and to articulate the importance of investment in science and technology. I look forward to building on the strong foundation established by Claude Canizares to enable more cross-disciplinary endeavors that can be game-changers within and beyond MIT.”

Since 1990, Zuber has held leadership roles associated with scientific experiments or instrumentation on nine NASA missions; at present, she remains involved with six of these missions. Since 2008, she has served as principal investigator of the space agency’s Gravity Recovery and Interior Laboratory (GRAIL) mission, an effort to map the moon’s gravitational field. By precisely measuring changes in distance between twin spacecraft orbiting the moon, she and other scientists hope to answer fundamental questions about the moon’s evolution and internal composition.

Zuber’s research bridges planetary geophysics and the technology of space-based laser and radio systems; she also has extensive experience in leading large scientific projects. GRAIL has been recognized for its achievements in science, technology and education; Zuber’s management brought the mission in on time and under budget.

Zuber holds a BA from the University of Pennsylvania, awarded in 1980, and an ScM and PhD from Brown University, awarded in 1983 and 1986, respectively. She has received awards and honors including MIT’s Killian Faculty Achievement Award; the American Geophysical Union’s Harry H. Hess Medal; and numerous NASA awards, including the Distinguished Public Service Medal and the Outstanding Public Leadership Medal.

During Canizares’ tenure, the Office of the Vice President for Research assumed primary responsibility for the Office of Sponsored Programs, and helped establish and oversee the Singapore-MIT Alliance for Research and Technology Centre (SMART), MITEI, and the David H. Koch Institute for Integrative Cancer Research. Among other notable accomplishments as vice president for research, Canizares took a leadership role in initiating a consortium to build the new Massachusetts Green High Performance Computing Center in Holyoke; helped to establish the new Institute of Medical Engineering and Science; and fostered stronger ties between MIT’s main campus in Cambridge and Lincoln Laboratory, a research laboratory in Lexington, Mass., that MIT operates for the U.S. Department of Defense.

“Year after year, despite a challenging funding environment, Claude Canizares led MIT to remarkable success in securing research support, while also helping to launch bold new initiatives, from Singapore to Skolkovo,” Reif said. “We are all grateful for his untiring dedication and creative leadership.”

In his new role, Canizares will oversee MIT’s portfolio of international engagements, which has seen four major additions in the past five years: MIT assisted in the 2007 creation of the Masdar Institute of Science and Technology in Abu Dhabi, a graduate educational and research institute devoted to advanced energy and sustainable technologies. Since 2008, Institute officials have partnered with the Singaporean government to establish SMART and the Singapore University of Technology and Design. And in 2011, MIT joined in the creation of the Skolkovo Institute of Science and Technology in Russia, envisioned as a world-class graduate research university.

“It has been a great privilege to serve as associate provost and as vice president for research,” Canizares said. “I look forward to being able to concentrate my attention on our present and future global engagements, and on continuing to strengthen the ties between our campus and Lincoln Laboratory.”

Canizares holds a BA, MA and PhD in physics from Harvard University. He is an authority on high-resolution X-ray spectroscopy and plasma diagnostics of supernova remnants and clusters of galaxies; X-ray studies of dark matter; X-ray properties of quasars and active galactic nuclei; and observational cosmology. He led the development of the Chandra High-Resolution Transmission Grating Spectrometer at NASA’s Chandra X-ray Observatory. Canizares is a member of the National Academy of Sciences and the American Academy of Arts and Sciences, has been honored for Meritorious Civilian Service to the United States Air Force, and has received two NASA Public Service Medals, as well as the Goddard Medal of the American Astronautical Society.

Canizares’ appointment as vice president will run until June 2014.