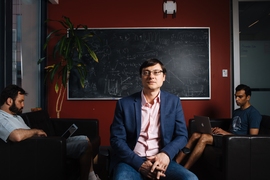 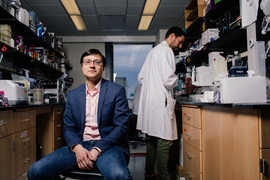 It’s a pretty good bet that among MIT’s physics faculty, Jeff Gore is the only one with test tubes of yeast growing in his lab.

Gore, a biophysicist who studies population dynamics, uses yeast and other microbes to explore the fundamental rules that govern phenomena such as population collapse. His microbial communities offer a window into principles that also influence larger-scale populations that are much more difficult to study.

“Microbes are a wonderful experimentally tractable model system to try to ask the kinds of questions we’re interested in, regarding all these phenomena that are also at play in fisheries, or in zebra populations, which are very difficult to approach experimentally,” says Gore, who recently earned tenure in MIT’s Department of Physics.

Since joining MIT’s faculty in 2010, Gore has explored the roles of “cheaters” and “cooperators” in microbial communities, as well as perturbations that can nudge a stable population toward a tipping point that leads to collapse. The rapid timescale of microbial growth allows Gore and his students to conduct an experiment in just a few days, test their predictions, revise their models based on the experimental results, and then launch new experiments.

“Going back and forth between experiment and modeling is a key part of how I like to do science, and it’s really only feasible, given the timescales, in these experimentally tractable organisms with short generation times,” he says.

A physical approach to biology

Gore, who grew up on a Christmas tree farm in Corvallis, Oregon, first visited MIT as a high school senior and immediately felt at home.

“I was staying with an older graduate from my high school at one of the fraternities across the river,” he recalls. “I played ping pong with different members of the fraternity for hours, and chatted with each of them about what they were doing, what they were excited about. It definitely felt like a place that I was going to appreciate.”

Gore began his undergraduate career as a physics major but gradually added more majors until he ended up with four concentrations, in physics, mathematics, economics, and electrical engineering.

After graduating from MIT, Gore went to the University of California at Berkeley, where he began studying electron transport in carbon nanotubes. However, his PhD advisor left Berkeley soon after that, so he switched to a biophysics lab, where he worked on building new kinds of microscopes to look at and manipulate individual biological molecules, such as DNA.

He found that he enjoyed applying tools and strategies from physics to try to discover patterns that underlie biological phenomena.

“I think many physicists, probably myself included, when we first learn biology there are a lot of things to memorize, and we tend not to be very good at memorizing things, so we decide we don’t like it,” Gore says. “But over time I realized that there are a bunch of big, deep questions in biology where the approach of a physicist is complementary to the approach taken by a molecular or cell biologist.”

He says that another appealing aspect of biophysics is that it offers the opportunity to run experiments that can be contained on a lab bench, as opposed to the huge particle colliders that are required to answer many of the fundamental questions remaining in traditional physics.

“I like experiments, and I wanted to do experiments that could be put on a bench, where you could really have the lead in your own project,” he says. “You may not be able to find out the origin of dark matter, but you have real control over your own experiment.”

After finishing his PhD, Gore returned to MIT as a Pappalardo Fellow in the Department of Physics, where he began studying population dynamics of microbes. Using game theory, a mathematical approach traditionally used by economists to predict individuals’ behavior in certain situations, he set out to explore cooperative behavior, which benefits other members of a species at a cost to the individual.

Working with yeast populations in which some members cooperate, by producing an excess of food, and others cheat, by gorging themselves on the food produced by others, Gore found that if an individual benefits even slightly by cooperating, it can survive even when surrounded by individuals that don’t cooperate. This helps to explain the perpetuation of cooperative behavior, which had puzzled biologists because if only the fittest individuals survive, genes for a behavior that benefits other members of the population more than the cooperating individual should die out.

As a faculty member, Gore has expanded his research to include analysis of the conditions that can lead to population collapse. In 2012, he showed that he could measure a population’s risk of collapse by monitoring how quickly it recovers from small disturbances such as food shortages or overcrowding. Later, he found that monitoring variations in population density in neighboring regions — a measure that is easier to obtain — can also be used to predict risk of collapse.

Since Gore joined MIT’s faculty, the physics department has increased its focus on the field of biophysics, hiring three more specialists in that area. That core group, along with several other biophysicists in the department, launched the Physics of Living Systems group about three years ago.

“We’re working to develop a critical mass of faculty who are taking this physics approach to understanding biology, which is different and hopefully complementary to the approach taken by other departments,” Gore says. “There really are a distinct set of approaches to biology in different departments, which is great because the different approaches give different insights.”

It pays to cooperate