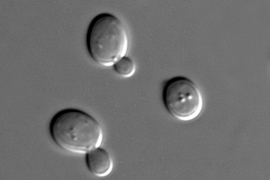 Caption:
MIT physicists studied early signs of population collapse in the yeast Saccharomyces cerevisiae.
Credits:
Image: Wikimedia Commons/Masur
Many factors — including climate change, overfishing or loss of food supply — can push a wild animal population to the brink of collapse. Ecologists have long sought ways to measure the risk of such a collapse, which could help wildlife and fishery managers take steps to protect endangered populations.

Last year, MIT physicists demonstrated that they could measure a population’s risk of collapse by monitoring how fast it recovers from small disturbances, such as a food shortage or overcrowding. However, this strategy would likely require many years of data collection — by which time it could be too late to save the population.

In a paper appearing in the April 10 online edition of Nature, the same research team describes a new way to predict the risk of collapse, based on variations in population density in neighboring regions. Such information is easier to obtain than data on population fluctuations over time, making it potentially more useful, according to the researchers.

“Spatial data are more accessible,” says Lei Dai, an MIT graduate student in physics and lead author of the study. “You can get them by satellite images, or you could just go out and do a survey.”

Led by Jeff Gore, an assistant professor of physics, Dai and Kirill Korolev, a Pappalardo Postdoctoral Fellow, grew yeast in test tubes and tracked the populations as they approached collapse. Yeast cells cooperate with other members of the population: Each of the organisms secretes an enzyme that breaks down sucrose in the environment into smaller sugars that it can use as a food source. All of the yeast benefit from this process, so a population is most successful when it maintains a certain density — neither too low nor too high.

In last year’s study, the researchers found that in populations of yeast that are subjected to increasingly stressful conditions, populations become less and less resilient to new disturbances until they reach a tipping point at which any small disruption could wipe out a population.

This phenomenon can be spotted quickly in yeast, which produces about 10 new generations per day, but measuring these population fluctuations for species such as fish or deer would take much more time. In hopes of finding more useful signals, the researchers turned their attention to spatial information.

There goes the neighborhood

In their new study, the researchers theorized a new type of indicator that they call “recovery length” — the spatial counterpart to recovery time. This idea is based on the observation that populations living near the boundary of a less hospitable habitat are affected, because the neighboring habitats are connected by migration. Populations further away from the bad region gradually recover to equilibrium, and the spatial scale of this recovery can reveal a population’s susceptibility to collapse, according to the researchers.

To test this idea, the researchers first established several linked yeast populations in a state of equilibrium. At the end of each day, a certain percentage of each population was transferred to adjacent test tubes, representing migration to adjacent regions.

The researchers then introduced a “bad” habitat, where only one in every 2,500 yeast survives from one day to the next. This reduction in population mimics what might happen in a natural population plagued by overfishing, or by a drastic reduction in its food supply.

The MIT team found that populations closest to the bad habitat had the hardest time maintaining an equilibrium state. Populations farther away maintained their equilibrium more easily.

“There’s some distance you have to go away from the bad region in order to get recovery of the population density,” Gore says. “How far you have to go before you reach equilibrium is the recovery length, and that tells you how close these populations are to collapse.”

The recovery length varies based on how much stress the populations are already under.

To apply this finding to a natural population, population density would need to be measured in a range of adjacent areas at increasing distances from a good/bad boundary. This information could then be mapped to reveal the recovery length. “What’s great about the recovery length is you don’t need a long time series. You could just measure it at one moment in time,” Gore says.

“It is exciting to see how different groups around the world are now pushing the research on generic early-warning signals forward in such innovative ways,” says Marten Scheffer, a professor of aquatic ecology and water quality management at Wageningen University in the Netherlands, who was not part of the research team. “This result will inspire field ecologists to have a fresh look at the patterns they study, to see if they may tease out critical information about fragility of different populations of threatened species.”

The MIT researchers are hoping to expand their studies to natural populations such as honeybees, fisheries or forests. They are also studying more complex experimental ecosystems involving several microbial species.

The research was funded by a Whitaker Health Sciences Fund Fellowship, a Pappalardo Fellowship, a National Institutes of Health Pathways to Independence Award and New Innovator Award, a National Science Foundation CAREER Award, a Sloan Research Fellowship, the Pew Scholars Program and the Allen Investigator Program.