When Japan met the world 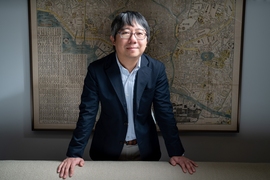 For centuries, until the late 1800s, Japan was famously closed off to the outside world. MIT historian Hiromu Nagahara studies what happened when the country finally opened up.

More specifically, Nagahara is a scholar who looks at the global cultural exchange that occurred once Japan became more engaged with other countries. On the one hand, Japan began importing culture. Nagahara’s first book, “Tokyo Boogie-Woogie: Japan’s Pop Era and Its Discontents,” published in 2015, detailed how, starting in the 1920s, Japanese popular music helped create a mass consumer culture that defined the country’s middle class.

On the other hand, people started venturing abroad from Japan, too. Nagahara’s current book project, with the working title, “After the Masquerade Balls,” looks at privileged Japanese families who began living overseas, especially in the 1920s, often as diplomats, and who gained entrée into the transnational elite society of the time, often through their interest in arts and culture.

In general, Nagahara says, looking at cross-cultural currents “is a kind of classic question in Japanese history, whether this is westernization or modernization.” At the same time, he says, cultural history teaches us about people — and their willingness to embrace art and other cultures as a way of life.

“What always fascinated me about all of these histories was the story of art and culture,” Nagahara says, “including musicians and other cultural practitioners in everyday life. And, more broadly, why do people become enamored with foreign culture during the course of modern Japanese history?”

As it happens, Nagahara’s own family history involves unusually extensive Japan-U.S. ties that go back generations — a history that has shaped his own education and career, and, to some degree, contributed to his own trajectory as a Japan scholar who now lives in the U.S.

“There were elements of my family’s history that made me keep modern Japanese history at arm’s length, and then as I became more interested in Japan, they became more of a motivator,” he says.

On his mother’s side of the family, Nagahara’s story goes back to a great-grandfather who was born into a samurai family in 1880, just as Japan’s feudal order was being overturned. Needing to make his own way in life, Nagahara’s great-grandfather sailed from Yokohama to San Francisco as a teenager, and — perhaps uniquely for a Japanese citizen of his era and class — wound up as a Presbyterian minister in New York City.

When Nagahara’s great-grandfather died in 1931, the family moved back to Japan. But one of his grandmother’s brothers returned to the U.S., fought in the Korean War as a U.S. Army soldier, graduated from the University of Michigan, spent his postwar career working in Japan as a U.S. civilian, and today is a retiree in Southern California.

“On my mom’s side, I had this story of this very long-standing connection with the United States, in these pivotal moments of both Japanese and American history in the 20th century,” Nagahara says. “Literally, my family travels back and forth.”

That’s just the half of it. On his father’s side, Nagahara had a great-grandfather whose family served the samurai lords of Hiroshima, and, again seeking a new profession in postfeudal Japan, became a professor of English-language instruction at the Hiroshima Higher Normal School, a predecessor to the present-day Hiroshima University.

That great-grandfather, along with some other family members, was killed in the atomic bombing of Hiroshima, on Aug. 6, 1945. But Nagahara’s paternal grandfather, then 15, survived the blast, along with a sister, and a brother who became one of Japan’s first Mark Twain scholars.

“There is a peace museum in Kyoto, where they have a display of his belt buckle, which is the only thing that identified him,” Nagahara says about his great-grandfather. He adds: “My grandfather on that side certainly never spoke about experience of the atomic bombing itself. I’ve heard a lot of it through other family members. My great uncle was more vocal; he was a left-wing intellectual and part of antinuclear movements after the war, and he was involved with creating that peace museum, and collecting the memory of his father and other members of the bombing.”

Despite the deep family trauma, those anglophone connections survived the war and influenced Nagahara as he looked for a vocation to pursue.

“On the one hand, growing up, I felt this is all very intense, this is overwhelming. But I think as I began to be more interested in Japan, once I was outside of Japan, these stories motivated me to think about myself, my family’s history, but then also the story of modern Japan and the United States, how that’s intertwined,” Nagahara says.

The Anglophone tradition in the family certainly continued on to Nagahara’s generation. Nagahara attended English-language schools while growing up outside of Tokyo, then earned his undergraduate degree from Gordon College in Massachusetts, before receiving his PhD in history from Harvard University in 2011.

“What I encountered at Harvard were historians who were more than receptive to my interest in cultural history,” Nagahara says.

That interest is fueling Nagahara’s current book, centered around the lives of a few well-traveled individuals — diplomats, political figures, and others — who in the 1920s and 1930s, he notes, were “transforming themselves from inhabitants of a far eastern island to members of a global elite.”

Many of them — even the diplomats — did so through an interest in the arts and collecting, furthering a modern tradition in which Japanese elites sought to distinguish themselves from other classes by their interest in Western culture.

“In some ways the period I’m looking at is the last gasp of a kind of old European culture, where there’s a real overlap between aristocracy and diplomacy,” Nagahara says. “It’s frivolous, it’s play, it’s entertainment, but this is also the glue that holds together not only international elites, but these people’s identities.”