Brain circuit helps us learn by watching others 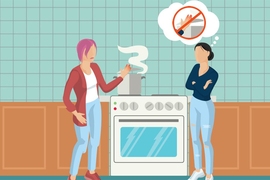 ↓ Download Image
Caption: It’s often said that experience is the best teacher, but the experiences of other people may be even better.
Credits: Image: Chelsea Turner/MIT

Caption:
It’s often said that experience is the best teacher, but the experiences of other people may be even better.
Credits:
Image: Chelsea Turner/MIT

It’s often said that experience is the best teacher, but the experiences of other people may be even better. If you saw a friend get chased by a neighborhood dog, for instance, you would learn to stay away from the dog without having to undergo that experience yourself.

This kind of learning, known as observational learning, offers a major evolutionary advantage, says Kay Tye, an MIT associate professor of brain and cognitive sciences and a member of MIT’s Picower Institute for Learning and Memory.

“So much of what we learn day-to-day is through observation,” she says. “Especially for something that is going to potentially hurt or kill you, you could imagine that the cost of learning it firsthand is very high. The ability to learn it through observation is extremely adaptive, and gives a major advantage for survival.”

Tye and her colleagues at MIT have now identified the brain circuit that is required for this kind of learning. This circuit, which is distinct from the brain network used to learn from firsthand experiences, relies on input from a part of the brain responsible for interpreting social cues.

Former MD/PhD student Stephen Allsop, along with Romy Wichmann, Fergil Mills, and Anthony Burgos-Robles co-led this study, which appears in the May 3 issue of Cell.

Previous brain-scanning studies in humans suggested that two parts of the brain known as the anterior cingulate cortex (ACC) and basolateral amygdala (BLA) are active when we learn by watching others. The ACC is involved in evaluating social information, among other functions, and the BLA plays a key role in processing emotions. However, it was unknown how these regions interact to learn from others’ experiences.

To try to unravel this process, the MIT team investigated what happens in the brains of mice as they observe another mouse receiving electric shocks paired with a cue such as a tone or light. During this procedure, mice receiving the shocks learn to fear the cue and will freeze when they hear it later.

The researchers found that when mice that had watched this process heard the cue one day later, they froze in fear, even though they had not experienced any shocks during the conditioning.

Once the researchers demonstrated that the mice had learned to connect the cue and the shock simply by watching other mice, they set out to figure out what was happening in the ACC and BLA as the observer mice learned to make the association. They recorded electrical activity in both regions as the mice watched the fear conditioning process, then performed a new type of analysis called neural trajectory analysis, which reveals how neurons change their firing rates as a behavior is learned.

This analysis, performed by study author and MIT graduate student Chia-Jung Chang, showed that the ACC becomes much more active as the mouse witnesses another mouse’s experience. It then relays information about the experience to the BLA, which uses it to form an association between the cue and the shock.

“The anterior cingulate is transmitting that there is important information to extract from the demonstrator,” Tye says. “It’s translating socially derived information and sending it to the BLA to assign predictive value there.”

In later experiments, the researchers identified specific neurons in the ACC that connect directly with neurons in the BLA. When they blocked those connections during the observational learning task, the mice did not learn to fear the cue.

When the researchers blocked the ACC-to-BLA connection in mice that were receiving shocks paired with a tone, there was no effect on the observer mouse’s ability to connect the cue with the shock, offering further evidence that this circuit is specifically involved in learning from others.

“If the animal is having the experience subjectively, it doesn’t have to extract information from another animal,” Tye says. “That’s what allowed us to conclude that the anterior cingulate is providing socially derived information.”

The researchers also showed that the ACC is necessary for more general types of social behavior, such as interacting with a nonthreatening juvenile mouse. ACC input to the BLA is also necessary for learning to fear an aggressive mouse after seeing it interact with another mouse.

Steve Chang, an assistant professor of psychology and neurobiology at Yale University, described the study as a “tour de force.”

“Although we have known the importance of these two brain regions in social, emotional, and decision-making processes, this study provides unprecedented and beautiful circuit-level accounts of how the two systems work together to make social learning possible,” says Chang, who was not involved in the research. “This new finding tells us a precise neural mechanism behind how we evaluate others and learn from them to guide our own cognition and behavior.”

Tye says she now hopes to study whether this circuit is also active when mice learn from other kinds of experiences, such as watching another mouse earn a reward for performing a particular task.

MIT researchers have identified the brain circuit required for observational learning, reports Xinhua. According to the study, the area involved in evaluating social information is more active when witnessing an experience and “relays information about the experience” to the region important for processing emotions.