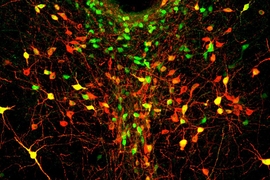 ↓ Download Image
Caption: In this image of the dorsal raphe nucleus, dopamine neurons are labeled in green, red, or both (appearing yellow).

Caption:
In this image of the dorsal raphe nucleus, dopamine neurons are labeled in green, red, or both (appearing yellow).
Credits:
Image: Gillian Matthews

Humans, like all social animals, have a fundamental need for contact with others. This deeply ingrained instinct helps us to survive; it’s much easier to find food, shelter, and other necessities with a group than alone. Deprived of human contact, most people become lonely and emotionally distressed.

In a study appearing in the Feb. 11 issue of Cell, MIT neuroscientists have identified a brain region that represents these feelings of loneliness. This cluster of cells, located near the back of the brain in an area called the dorsal raphe nucleus (DRN), is necessary for generating the increased sociability that normally occurs after a period of social isolation, the researchers found in a study of mice.

“To our knowledge, this is the first time anyone has pinned down a loneliness-like state to a cellular substrate. Now we have a starting point for really starting to study this,” says Kay Tye, the Whitehead Career Development Assistant Professor of Brain and Cognitive Sciences, a member of MIT’s Picower Institute for Learning and Memory, and one of the senior authors of the study.

While much research has been done on how the brain seeks out and responds to rewarding social interactions, very little is known about how isolation and loneliness also motivate social behavior.

“There are many studies from human psychology describing how we have this need for social connection, which is particularly strong in people who feel lonely. But our understanding of the neural mechanisms underlying that state is pretty slim at the moment. It certainly seems like a useful, adaptive response, but we don’t really know how that’s brought about,” says Gillian Matthews, a postdoc at the Picower Institute and the paper’s lead author.

Matthews first identified the loneliness neurons somewhat serendipitously, while studying a completely different topic. As a PhD student at Imperial College London, she was investigating how drugs affect the brain, particularly dopamine neurons. She originally planned to study how drug abuse influences the DRN, a brain region that had not been studied very much.

As part of the experiment, each mouse was isolated for 24 hours, and Matthews noticed that in the control mice, which had not received any drugs, there was a strengthening of connections in the DRN following the isolation period.

Further studies, both at Imperial College London and then in Tye’s lab at MIT, revealed that these neurons were responding to the state of isolation. When animals are housed together, DRN neurons are not very active. However, during a period of isolation, these neurons become sensitized to social contact and when the animals are reunited with other mice, DRN activity surges. At the same time, the mice become much more sociable than animals that had not been isolated.

When the researchers suppressed DRN neurons using optogenetics, a technique that allows them to control brain activity with light, they found that isolated mice did not show the same rebound in sociability when they were re-introduced to other mice.

“That suggested these neurons are important for the isolation-induced rebound in sociability,” Tye says. “When people are isolated for a long time and then they’re reunited with other people, they’re very excited, there’s a surge of social interaction. We think that this adaptive and evolutionarily conserved trait is what we are modeling in mice, and these neurons could play a role in that increased motivation to socialize.”

The researchers also found that animals with a higher rank in the social hierarchy were more responsive to changes in DRN activity, suggesting that they may be more susceptible to feelings of loneliness following isolation.

“The social experience of every animal is not the same in a group,” Tye says. “If you’re the dominant mouse, maybe you love your social environment. And if you’re the subordinate mouse, and you’re being beat up every day, maybe it’s not so fun. Maybe you feel socially excluded already.”

The findings represent “an amazing cornerstone for future studies of loneliness,” says Alcino Silva, a professor of neurobiology, psychiatry, and psychology at the David Geffen School of Medicine at UCLA who was not involved in the research.

“There is something poetic and fascinating about the idea that modern neuroscience tools have allowed us to reach to the very depths of the human soul, and that in this search we have discovered that even the most human of emotions, loneliness, is shared in some recognizable form with even one of our distant mammalian relatives — the mouse,” Silva says.

The researchers are now studying whether these neurons actually detect loneliness or are responsible for driving the response to loneliness, and whether they might be part of a larger brain network that responds to social isolation. Another area to be explored is whether differences in these neurons can explain why some people prefer more social contact than others, and whether those differences are innate or formed by experience.

“There’s probably some part that could very well be determined by innate brain features, but I think probably an equal, if not greater, contribution would be from the environment in which individuals have developed,” Tye says. “These are completely open questions. We can only speculate about it at this point.”

Writing for The New York Times, Katie Hafner highlights how MIT researchers have identified a region of the brain that they believe could be responsible for producing feelings of loneliness. Hafner explains that “the region, known as the dorsal raphe nucleus, or D.R.N., is best known for its link to depression.”

Wired reporter Emily Reynolds writes that MIT neuroscientists have identified the region of the brain that generates a feeling of loneliness. The researchers found that the “DRN, near the back of the brain, hosts a cluster of cells that the team say is responsible for generating increased sociability after periods of isolation.”