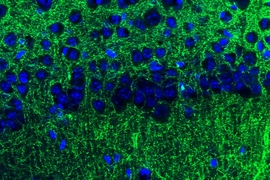 ↓ Download Image
Caption: The tips of long neuronal extensions from the amygdala (green) contact neurons of the hippocampus (blue). This communication pathway helps to modulate anxiety.

Caption:
The tips of long neuronal extensions from the amygdala (green) contact neurons of the hippocampus (blue). This communication pathway helps to modulate anxiety.

Anxiety disorders, which include posttraumatic stress disorder, social phobias and obsessive-compulsive disorder, affect 40 million American adults in a given year. Currently available treatments, such as antianxiety drugs, are not always effective and have unwanted side effects.

To develop better treatments, a more specific understanding of the brain circuits that produce anxiety is necessary, says Kay Tye, an assistant professor of brain and cognitive sciences and member of MIT’s Picower Institute for Learning and Memory.

“The targets that current antianxiety drugs are acting on are very nonspecific. We don’t actually know what the targets are for modulating anxiety-related behavior,” Tye says.

In a step toward uncovering better targets, Tye and her colleagues have discovered a communication pathway between two brain structures — the amygdala and the ventral hippocampus — that appears to control anxiety levels. By turning the volume of this communication up and down in mice, the researchers were able to boost and reduce anxiety levels.

Both the hippocampus, which is necessary for memory formation, and the amygdala, which is involved in memory and emotion processing, have previously been implicated in anxiety. However, it was unknown how the two interact.

To study those interactions, the researchers turned to optogenetics, which allows them to engineer neurons to turn their electrical activity on or off in response to light. For this study, the researchers modified a set of neurons in the basolateral amygdala (BLA); these neurons send long projections to cells of the ventral hippocampus.

The researchers tested the mice’s anxiety levels by measuring how much time they were willing to spend in a situation that normally makes them anxious. Mice are naturally anxious in open spaces where they are easy targets for predators, so when placed in such an area, they tend to stay near the edges.

When the researchers activated the connection between cells in the amygdala and the hippocampus, the mice spent more time at the edges of an enclosure, suggesting they felt anxious. When the researchers shut off this pathway, the mice became more adventurous and willing to explore open spaces. However, when these mice had this pathway turned back on, they scampered back to the security of the edges.

In a study published in 2011, Tye found that activating a different subset of neurons in the amygdala had the opposite effect on anxiety as the neurons studied in the new paper, suggesting that anxiety can be modulated by many different converging inputs.

“Neurons that look virtually indistinguishable from each other in a single region can project to different regions and these different projections can have totally opposite effects on anxiety,” Tye says. “Anxiety is such an important trait for survival, so it makes sense that you want some redundancy in the system. You want a couple of different avenues to modulate anxiety.”

The Neuron study contributes significantly to scientists’ understanding of the roles of the amygdala and hippocampus in anxiety and offers directions for seeking new drug targets, says Joshua Gordon, an associate professor of psychiatry at Columbia University.

“The study specifies a particular connection in the brain as being important for anxiety. One could imagine, then, identifying components of the machinery of that connection — synaptic proteins or ion channels, for example — that are particularly important for amygdala-hippocampal connectivity. If such specific components could be identified, they would be potential targets for novel antianxiety drugs,” says Gordon, who was not part of the research team.

In future studies, the MIT team plans to investigate the effects of the amygdala on other targets in the hippocampus and the prefrontal cortex, which has also been implicated in anxiety. Deciphering these circuits could be an important step toward finding better drugs to help treat anxiety.

The research was funded by the JPB Foundation, the Picower Institute Innovation Fund, the Whitehall Foundation and the Klingenstein Foundation.