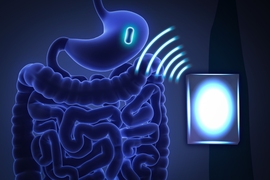 ↓ Download Image
Caption: “Right now we have no way of measuring things like core body temperature or concentration of micronutrients over an extended period of time, and with these devices you could start to do that kind of thing,” says Abubakar Abid, a former MIT graduate student.
Credits: Image: MIT News. Battery image courtesy of Ella Maru Studio / Giovanni Traverso / Abubakar Abid

Caption:
“Right now we have no way of measuring things like core body temperature or concentration of micronutrients over an extended period of time, and with these devices you could start to do that kind of thing,” says Abubakar Abid, a former MIT graduate student.
Credits:
Image: MIT News. Battery image courtesy of Ella Maru Studio / Giovanni Traverso / Abubakar Abid

Researchers at MIT, Brigham and Women’s Hospital, and the Charles Stark Draper Laboratory have devised a way to wirelessly power small electronic devices that can linger in the digestive tract indefinitely after being swallowed. Such devices could be used to sense conditions in the gastrointestinal tract, or carry small reservoirs of drugs to be delivered over an extended period.

Finding a safe and efficient power source is a critical step in the development of such ingestible electronic devices, says Giovanni Traverso, a research affiliate at MIT’s Koch Institute for Integrative Cancer Research and a gastroenterologist and biomedical engineer at Brigham and Women’s Hospital.

“If we’re proposing to have systems reside in the body for a long time, power becomes crucial,” says Traverso, one of the senior authors of the study. “Having the ability to transmit power wirelessly opens up new possibilities as we start to approach this problem.”

The new strategy, described in the April 27 issue of the journal Scientific Reports, is based on the wireless transfer of power from an antenna outside the body to another one inside the digestive tract. This method yields enough power to run sensors that could monitor heart rate, temperature, or levels of particular nutrients or gases in the stomach.

“Right now we have no way of measuring things like core body temperature or concentration of micronutrients over an extended period of time, and with these devices you could start to do that kind of thing,” says Abubakar Abid, a former MIT graduate student who is the paper’s first author.

The research team has been working for several years on different types of ingestible electronics, including sensors that can monitor vital signs, and drug delivery vehicles that can remain in the digestive tract for weeks or months. To power these devices, the team has been exploring various options, including a galvanic cell that is powered by interactions with the acid of the stomach.

However, one drawback to using this type of battery cell is that the metal electrodes stop working over time. In their latest study, the team wanted to come up with a way to power their devices without using electrodes, allowing them to remain in the GI tract indefinitely.

The researchers first considered the possibility of using near-field transmission, that is, wireless energy transfer between two antennas over very small distances. This approach is now used for some cell phone chargers, but because the antennas have to be very close together, the researchers realized it would not work for transferring power over the distances they needed — about 5 to 10 centimeters.

Instead, they decided to explore midfield transmission, which can transfer power across longer distances. Researchers at Stanford University have recently explored using this strategy to power pacemakers, but no one had tried using it for devices in the digestive tract.

Using this approach, the researchers were able to deliver 100 to 200 microwatts of power to their device, which is more than enough to power small electronics, Abid says. A temperature sensor that wirelessly transmits a temperature reading every 10 seconds would require about 30 microwatts, as would a video camera that takes 10 to 20 frames per second.

In a study conducted in pigs, the external antenna was able to transfer power over distances ranging from 2 to 10 centimeters, and the researchers found that the energy transfer caused no tissue damage.

“We’re able to efficiently send power from the transmitter antennas outside the body to antennas inside the body, and do it in a way that minimizes the radiation being absorbed by the tissue itself,” Abid says.

Christopher Bettinger, an associate professor of materials science and biomedical engineering at Carnegie Mellon University, describes the study as a “great advancement” in the rapidly growing field of ingestible electronics.

“This is a classic problem with implantable devices: How do you power them? What they’re doing with wireless power is a very nice approach,” says Bettinger, who was not involved in the research.

An alternative to batteries

For this study, the researchers used square antennas with 6.8-millimeter sides. The internal antenna has to be small enough that it can be swallowed, but the external antenna can be larger, which offers the possibility of generating larger amounts of energy. The external power source could be used either to continuously power the internal device or to charge it up, Traverso says.

“It’s really a proof-of-concept in establishing an alternative to batteries for the powering of devices in the GI tract,” he says.

“This work, combined with exciting advancements in subthreshold electronics, low-power systems-on-a-chip, and novel packaging miniaturization, can enable many sensing, monitoring, and even stimulation or actuation applications,” Smith says.

The researchers are continuing to explore different ways to power devices in the GI tract, and they hope that some of their devices will be ready for human testing within about five years.

“We’re developing a whole series of other devices that can stay in the stomach for a long time, and looking at different timescales of how long we want to keep them in,” Traverso says. “I suspect that depending on the different applications, some methods of powering them may be better suited than others.”

The research was funded by the National Institutes of Health and by a Draper Fellowship.