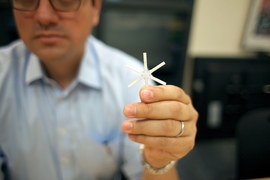 ↓ Download Image
Caption: The star-shaped drug delivery device, held here by Giovanni Traverso, a Koch Institute research affiliate, can be folded inward and encased in a smooth capsule. Once ingested, the device delivers a full drug payload gradually over weeks or even months.

Caption:
The star-shaped drug delivery device, held here by Giovanni Traverso, a Koch Institute research affiliate, can be folded inward and encased in a smooth capsule. Once ingested, the device delivers a full drug payload gradually over weeks or even months.

Researchers at MIT and Brigham and Women’s Hospital have developed a new drug capsule that remains in the stomach for up to two weeks after being swallowed, gradually releasing its drug payload. This type of drug delivery could replace inconvenient regimens that require repeated doses, which would help to overcome one of the major obstacles to treating and potentially eliminating diseases such as malaria.

In a study described in the Nov. 16 issue of Science Translational Medicine, the researchers used this approach to deliver a drug called ivermectin, which they believe could aid in malaria elimination efforts. However, this approach could be applicable to many other diseases, says Robert Langer, the David H. Koch Institute Professor at MIT and a member of MIT’s Koch Institute for Integrative Cancer Research.

“Until now, oral drugs would almost never last for more than a day,” Langer says. “This really opens the door to ultra-long-lasting oral systems, which could have an effect on all kinds of diseases, such as Alzheimer’s or mental health disorders. There are a lot of exciting things this could someday enable.”

Langer and Giovanni Traverso, a research affiliate at the Koch Institute and a gastroenterologist and biomedical engineer at Brigham and Women’s Hospital, are the senior authors of the paper. The paper’s lead authors are former MIT postdoc Andrew Bellinger, MIT postdoc Mousa Jafari, and former MIT postdocs Tyler Grant and Shiyi Zhang. The team also includes researchers from Harvard University, Imperial College London, and the Institute for Disease Modeling in Bellevue, Washington.

The research has led to the launching of Lyndra, a Cambridge-based company that is developing the technology with a focus on diseases for which patients would benefit the most from sustained drug delivery, including neuropsychiatric disorders, HIV, diabetes, and epilepsy.

Drugs taken orally tend to work for a limited time because they pass rapidly through the body and are exposed to harsh environments in the stomach and intestines. Langer’s lab has been working for several years to overcome this challenge, with an initial focus on malaria and ivermectin, which kills any mosquito that bites a person who is taking the drug. This can greatly reduce the transmission of malaria and other mosquito-borne illnesses.

The team envisions that long-term delivery of ivermectin could help with malaria elimination campaigns based on mass drug administration — the treatment of an entire population, whether infected or not, in an area where a disease is common. In this scenario, ivermectin would be paired with the antimalaria drug artemisinin.

“Getting patients to take medicine day after day after day is really challenging,” says Bellinger, now a cardiologist at Brigham and Women’s Hospital and chief scientific officer at Lyndra. “If the medicine could be effective for a long period of time, you could radically improve the efficacy of your mass drug administration campaigns.”

To achieve ultra-long-term delivery, drugs need to be packaged in a capsule that is stable enough to survive the harsh environment of the stomach and can release its contents over time. Once the drug is released, the capsule must break down and pass safely through the digestive tract.

Working with those criteria in mind, the team designed a star-shaped structure with six arms that can be folded inward and encased in a smooth capsule. Drug molecules are loaded into the arms, which are made of a rigid polymer called polycaprolactone. Each arm is attached to a rubber-like core by a linker that is designed to eventually break down.

In tests in pigs, the researchers confirmed that the drug is gradually released over two weeks. The linkers that join the arms to the core then dissolve, allowing the arms to break off. The pieces are small enough that they can pass harmlessly through the digestive tract.

“This is a platform into which you can incorporate any drug,” Jafari says. “This can be used with any drug that requires frequent dosing. We can replace that dosing with a single administration.”

This type of delivery could also help doctors to run better clinical trials by making it easier for patients to take the drugs, Zhang says. “It may help doctors and the pharma industry to better evaluate the efficacy of certain drugs, because currently a lot of patients in clinical trials have serious medication adherence problems that will mislead the clinical studies,” he says.

The new study includes mathematical modeling done by researchers at Imperial College London and the Institute for Disease Modeling to predict the potential impact of this approach. The models suggest that if this technology were used to deliver ivermectin along with antimalaria treatments to 70 percent of a population in a mass drug administration campaign, disease transmission could be reduced the same amount as if 90 percent were treated with antimalaria treatments alone.

“What we showed is that we stand to significantly amplify the effect of those campaigns,” Traverso says. “The introduction of this kind of system could have a substantial impact on the fight against malaria and transform clinical care in general by ensuring patients receive their medication.”

Peter Agre, director of the Johns Hopkins Malaria Research Institute, who was not involved in the research, described the new approach as a “remarkable” advance that could improve treatment of malaria and any other disease that requires long-term treatment.

“If you could reduce the frequency of dosing, and one treatment would continue to release medicine until the course is completed, that would be very beneficial,” Agre says.

Researchers led by Traverso are working on developing similar capsules to deliver drugs against other tropical diseases, as well as HIV and tuberculosis.

The research was funded by the Bill and Melinda Gates Foundation, the National Institutes of Health, and the Max Planck Research Award.

Prof. Robert Langer speaks with Kathryn Nave of Wired about the future of drug delivery. Langer explains that a problem facing medical professionals is that many drugs are not taken regularly or as prescribed, and describes how he is developing a “long-acting pill that you could swallow to release the right drug dosage for weeks.”

A new drug delivery system developed by MIT researchers may help eradicate malaria and could boost medication adherence, writes Rachel Zimmerman for WBUR’s Bostonomix. "People don't take their medicines and this might be a way, someday, for Alzheimer's patients to have much better treatments and people with mental health diseases to have much better treatments," says Prof. Langer.

MIT researchers have devised a capsule that can deliver medications over extended periods of time, and could be useful in halting the spread of malaria. The Economist notes that the device could be a “useful addition to the armory being deployed against malaria. And that, alone, could save many lives a year.”

Bob Tedeschi writes for STAT that MIT researchers have developed a device that can remain in the stomach for up to two weeks, gradually releasing medication. “The capsule represents the latest effort to solve a major flaw in drug delivery,” Tedeschi explains. “Because the human stomach clears its contents multiple times daily, pill takers must dose themselves frequently.”

Researchers at MIT have developed a slow-release drug capsule that can last two weeks in a person’s stomach, writes Jamie Ducharme for Boston Magazine. “The capsule was tested for use in malaria prevention, but the researchers behind it say it could be used for virtually any condition that requires regular oral medication,” Ducharme explains.

MIT researchers have developed a star-shaped, drug-delivery device that can stay in the stomach for up to two weeks, gradually releasing medication, reports Melissa Healy for The Los Angeles Times. The researchers believe the device could be useful in “delivering a wide range of medications for diseases in which patient non-adherence is a problem.”

MIT researchers have developed a new drug delivery capsule that can deliver medication over extended periods of time, reports Claire Maldarelli for Popular Science. Once in the stomach, the capsule opens into a star shape, which “prevents the pill from leaving the stomach and entering the small intestine.”

Reuters reporter Kate Kelland writes that MIT researchers have created a new drug-delivery capsule that can stay in the stomach for up to two weeks after being swallowed. The star-shaped device could be “a powerful weapon in fighting malaria, HIV and other diseases where successful treatment depends on repeated doses of medicine.”