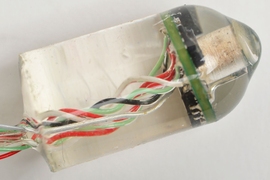 ↓ Download Image
Caption: This ingestible electronic device invented at MIT can measure heart rate and respiratory rate from inside the gastrointestinal tract.

Using technology invented at MIT, doctors may one day be able to monitor patients’ vital signs by having them swallow an ingestible electronic device that measures heart rate and breathing rate from within the gastrointestinal tract.

This type of sensor could make it easier to assess trauma patients, monitor soldiers in battle, perform long-term evaluation of patients with chronic illnesses, or improve training for professional and amateur athletes, the researchers say.

The new sensor calculates heart and breathing rates from the distinctive sound waves produced by the beating of the heart and the inhalation and exhalation of the lungs.

“Through characterization of the acoustic wave, recorded from different parts of the GI tract, we found that we could measure both heart rate and respiratory rate with good accuracy,” says Giovanni Traverso, a research affiliate at MIT’s Koch Institute for Integrative Cancer Research, a gastroenterologist at Massachusetts General Hospital, and one of the lead authors of a paper describing the device in the Nov. 18 issue of the journal PLOS One.

Researchers explain how their technology could be used to monitor vital signs from within the GI tract.

Doctors currently measure vital signs such as heart and respiratory rate using techniques including electrocardiograms (ECG) and pulse oximetry, which require contact with the patient’s skin. These vital signs can also be measured with wearable monitors, but those are often uncomfortable to wear.

Inspired by existing ingestible devices that can measure body temperature, and others that take internal digestive-tract images, the researchers set out to design a sensor that would measure heart and respiratory rate, as well as temperature, from inside the digestive tract.

The simplest way to achieve this, they decided, would be to listen to the body using a small microphone. Listening to the sounds of the chest is one of the oldest medical diagnostic techniques, practiced by Hippocrates in ancient Greece. Since the 1800s, doctors have used stethoscopes to listen to these sounds.

The researchers essentially created “an extremely tiny stethoscope that you can swallow,” Swiston says. “Using the same sensor, we can collect both your heart sounds and your lung sounds. That’s one of the advantages of our approach — we can use one sensor to get two pieces of information.”

To translate these acoustic data into heart and breathing rates, the researchers had to devise signal processing systems that distinguish the sounds produced by the heart and lungs from each other, as well as from background noise produced by the digestive tract and other parts of the body.

The entire sensor is about the size of a multivitamin pill and consists of a tiny microphone packaged in a silicone capsule, along with electronics that process the sound and wirelessly send radio signals to an external receiver, with a range of about 3 meters.

In tests along the GI tract of pigs, the researchers found that the device could accurately pick up heart rate and respiratory rate, even when conditions such as the amount of food being digested were varied.

“The authors introduce some interesting and radically different approaches to wearable physiological status monitors, in which the devices are not worn on the skin or on clothing, but instead reside, in a transient fashion, inside the gastrointestinal tract. The resulting capabilities provide a powerful complement to those found in wearable technologies as traditionally conceived,” says John Rogers, a professor of materials science and engineering at the University of Illinois who was not part of the research team.

The researchers expect that the device would remain in the digestive tract for only a day or two, so for longer-term monitoring, patients would swallow new capsules as needed.

For the military, this kind of ingestible device could be useful for monitoring soldiers for fatigue, dehydration, tachycardia, or shock, the researchers say. When combined with a temperature sensor, it could also detect hypothermia, hyperthermia, or fever from infections.

In the future, the researchers plan to design sensors that could diagnose heart conditions such as abnormal heart rhythms (arrhythmias), or breathing problems including emphysema or asthma. Currently doctors require patients to wear a harness (Holter) monitor for up to a week to detect such problems, but these often fail to produce a diagnosis because patients are uncomfortable wearing them 24 hours a day.

“If you could ingest a device that would listen for those pathological sounds, rather than wearing an electrical monitor, that would improve patient compliance,” Swiston says.

The researchers also hope to create sensors that would not only diagnose a problem but also deliver a drug to treat it.

“We hope that one day we’re able to detect certain molecules or a pathogen and then deliver an antibiotic, for example,” Traverso says. “This development provides the foundation for that kind of system down the line.”

Researchers from MIT and Mass General Hospital have been named one of the winners of Popular Science’s 2016 Invention Awards for their work developing an ingestible electronic device that measures vital signs, reports Dialynn Dwyer for Boston.com.

Lincoln Lab researcher Albert Swiston speaks on NPR’s All Things Considered about the new sensor developed by MIT researchers that monitors vital signs through the gastrointestinal tract. “There are some bits of information from the body—namely the temperature of the body—that can only be monitored from inside the body,” explains Swiston.

Researchers at MIT and Massachusetts General Hospital have developed an ingestible device that monitors vital signs, reports Dialynn Dwyer of Boston.com. Dwyer explains that the device is a “pill-sized stethoscope with a microphone that, once swallowed, transmits data from inside the body.”

Nidhi Subbaraman reports for BetaBoston that MIT researchers have devised an ingestible microphone that allows doctors to monitor a patient’s vital signs. “A key innovation was developing algorithms that would distinguish important signals…from the noisy gurgling of the gut, and then translate them into numbers a physician can read and understand,” writes Subbaraman.

Researchers at MIT have developed an ingestible sensor that can measure vital signs without any external contact, reports Emily Reynolds for Wired. “The sensor works by using microphones—like ones found in mobile phones—that are able to pick up sound waves from the heart and lungs,” writes Reynolds.

MIT researchers have developed an ingestible sensor that can monitor vital signs, reports Rae Ellen Bichell for NPR. "Trauma patients are a really clear winner here, because we can do vital sign monitoring without touching the skin," says Albert Swiston of Lincoln Laboratory.