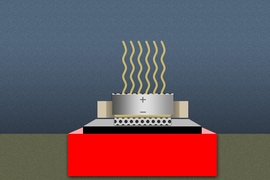 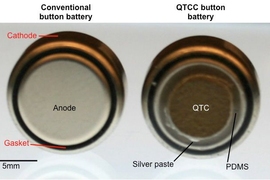 Every year, nearly 4,000 children go to emergency rooms after swallowing button batteries — the flat, round batteries that power toys, hearing aids, calculators, and many other devices. Ingesting these batteries has severe consequences, including burns that permanently damage the esophagus, tears in the digestive tract, and in some cases, even death.

To help prevent such injuries, researchers at MIT, Brigham and Women’s Hospital, and Massachusetts General Hospital have devised a new way to coat batteries with a special material that prevents them from conducting electricity after being swallowed. In animal tests, they found that such batteries did not damage the gastrointestinal (GI) tract at all.

“We are all very pleased that our studies have shown that these new batteries we created have the potential to greatly improve safety due to accidental ingestion for the thousands of patients every year who inadvertently swallow electric components in toys or other entities,” says Robert Langer, the David H. Koch Institute Professor at MIT and a member of MIT’s Koch Institute for Integrative Cancer Research, Institute for Medical Engineering and Science (IMES), and Department of Chemical Engineering.

Langer and Jeffrey Karp, an associate professor of medicine at Harvard Medical School and Brigham and Women’s Hospital, are the senior authors of a paper describing the new battery coatings in this week’s edition of the Proceedings of the National Academy of Sciences. The paper’s lead authors are Bryan Laulicht, a former IMES postdoc, and Giovanni Traverso, a research fellow at the Koch Institute and a gastroenterologist at MGH.

About 5 billion button batteries are produced every year, and these batteries have become more and more powerful, making them even more dangerous if swallowed. In the United States, recent legislation has mandated warning labels on packages, and some toys are required to have battery housings that can only be opened with a screwdriver. However, there have been no technological innovations to make the batteries themselves safer, Karp says.

When batteries are swallowed, they start interacting with water or saliva, creating an electric current that produces hydroxide, a caustic ion that damages tissue. This can cause serious injury within just a couple of hours, especially if parents don’t realize right away that a child has swallowed a battery.

“Disc batteries in the esophagus require [emergency] endoscopic removal,” Traverso says. “This represents a gastrointestinal emergency, given that tissue damage starts as soon as the battery is in contact with the tissue, generating an electric current [and] leading to a chemical burn.”

The research team began thinking about ways to alter batteries so they would not generate a current inside the human body but would still be able to power a device. They knew that when batteries are inside their housing, they experience a gentle pressure. To take advantage of this, they decided to coat the batteries with a material that would allow them to conduct when under pressure, but would act as an insulator when the batteries are not being compressed.

Quantum tunneling composite (QTC), an off-the-shelf material commonly used in computer keyboards and touch screens, fit the bill perfectly. QTC is a rubberlike material, usually made of silicone, embedded with metal particles. Under normal circumstances, these particles are too far apart to conduct an electric current. However, when squeezed, the particles come closer together and start conducting. This allows QTC to switch from an insulator to a conductor, depending on how much pressure it is under.

To verify that this coating would protect against tissue damage, the researchers first calculated how much pressure the battery would experience inside the digestive tract, where movements of the tract, known as peristalsis, help move food along. They calculated that even under the highest possible forces, found in patients with a rare disorder called “nutcracker esophagus,” the QTC-coated batteries would not conduct.

“You want to know what’s the maximum force that could possibly be applied, and you want to make sure the batteries will conduct only above that threshold,” Laulicht says. “We felt that once we were well above those levels, these coatings would pass through the GI tract unchanged.”

After those calculations were done, the researchers monitored the coated batteries in the esophagus of a pig, and found no signs of damage.

Because QTC is relatively inexpensive and already used in other consumer products, the researchers believe battery companies could implement this type of coating fairly easily. They are now working on developing a scalable method for manufacturing coated batteries and seeking companies that would be interesting in adopting them.

“We were really interested in trying to impose design criteria that would allow us to have an accelerated path to get this out into society and reduce injuries,” Karp says. “We think this is a relatively simple solution that should be easy to scale, won’t add significant cost, and can address one of the biggest problems associated with ingestion of these batteries.”

Also, because the coating is waterproof, the researchers believe it could be used to make batteries weather-resistant and more suitable for outdoor use. They also plan to test the coating on other types of batteries, including lithium batteries.

Edith Mathiowitz, a professor of medical science at Brown University who was not involved in the research, says she believes this approach is a “brilliant idea” that offers an easy fix for the potential dangers of battery ingestion.

“What I like about it is that it’s a simple idea you could implement very easily. It’s not something that requires a big new manufacturing facility,” she says. “And, it could be useful eventually in any type of size of battery.”

Boston Globe reporter Callum Borchers writes about how MIT researchers have developed a new coating that could reduce the risk posed by ingesting batteries. The battery has “been shown in lab tests to deactivate an ingested battery without compromising its performance in electronic devices,” writes Borchers.

BBC News reporter Jonathan Webb writes that researchers from MIT have created child-safe batteries by developing a coating that allows batteries to conduct electricity only when squeezed. The “pressure-sensitive design makes use of a property called quantum tunneling, which is also used in touch pads and screens,” writes Webb.

Reporting for Scientific American, Cynthia Graber examines how MIT researchers have developed a battery coating that reduces the risk of injury if swallowed. Inside the coating, “microparticles of conductive metal are suspended in an insulating layer,” Graber explains.

Alison Bruzek of NPR reports that MIT researchers have developed a shield that can prevent the electrical currents in a battery from damaging the esophagus. The material used to create the shield is already commercially available, NPR reports, making the coating a cheap solution to the issue of children swallowing batteries.

Taking the sting out of medical tape