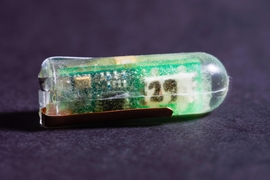 ↓ Download Image
Caption: Researchers at MIT and Brigham and Women’s Hospital have designed and demonstrated a small, ingestible voltaic cell that is sustained by the acidic fluids in the stomach.

Caption:
Researchers at MIT and Brigham and Women’s Hospital have designed and demonstrated a small, ingestible voltaic cell that is sustained by the acidic fluids in the stomach.
Credits:
Photo: Diemut Strebe

Researchers at MIT and Brigham and Women’s Hospital have designed and demonstrated a small voltaic cell that is sustained by the acidic fluids in the stomach. The system can generate enough power to run small sensors or drug delivery devices that can reside in the gastrointestinal tract for extended periods of time.

This type of power could offer a safer and lower-cost alternative to the traditional batteries now used to power such devices, the researchers say.

“We need to come up with ways to power these ingestible systems for a long time,” says Giovanni Traverso, a research affiliate at the Koch Institute for Integrative Cancer Research. “We see the GI tract as providing a really unique opportunity to house new systems for drug delivery and sensing, and fundamental to these systems is how they are powered.”

Traverso, who is also a gastroenterologist and biomedical engineer at Brigham and Women’s Hospital, is one of the senior authors of the study. The others are Robert Langer, the David H. Koch Institute Professor at MIT; and Anantha Chandrakasan, head of MIT’s Department of Electrical Engineering and Computer Science and the Vannevar Bush Professor of Electrical Engineering and Computer Science. MIT postdoc Phillip Nadeau is the lead author of the paper, which appears in the Feb. 6 issue of Nature Biomedical Engineering.

Traverso and Langer have previously built and tested many ingestible devices that can be used to sense physiological conditions such as temperature, heart rate, and breathing rate, or to deliver drugs to treat diseases such as malaria.

“This work could lead to a new generation of electronic ingestible pills that could someday enable novel ways of monitoring patient health and/or treating disease,” Langer says.

These devices are usually powered by small batteries, but conventional batteries self-discharge over time and pose a possible safety risk. To overcome those disadvantages, Langer and Traverso worked with Nadeau and Chandrakasan, who specialize in developing low-power electronics.

The research team took inspiration from a very simple type of voltaic cell known as a lemon battery, which consists of two electrodes — often a galvanized nail and a copper penny — stuck in a lemon. The citric acid in the lemon carries a small electric current between the two electrodes.

To replicate that strategy, the researchers attached zinc and copper electrodes to the surface of their ingestible sensor. The zinc emits ions into the acid in the stomach to power the voltaic circuit, generating enough energy to power a commercial temperature sensor and a 900-megahertz transmitter.

In tests in pigs, the devices took an average of six days to travel through the digestive tract. While in the stomach, the voltaic cell produced enough energy to power a temperature sensor and to wirelessly transmit the data to a base station located 2 meters away, with a signal sent every 12 seconds.

Once the device moved into the small intestine, which is less acidic than the stomach, the cell generated only about 1/100 of what it produced in the stomach. “But there’s still power there, which you could harvest over a longer period of time and use to transmit less frequent packets of information,” Traverso says.

“This paper reports an exciting and remarkably broad collection of advances in ‘ingestible’ electronics — from bioresorbable power supplies to energy efficient electronics, advanced sensors/actuators, and wireless communication systems,” says John Rogers, a professor of materials science and engineering at Northwestern University, who was not involved in the research. “These types of systems have great potential to address important clinical needs.”

The current prototype of the device is a cylinder about 40 millimeters long and 12 millimeters in diameter, but the researchers anticipate that they could make the capsule about one-third that size by building a customized integrated circuit that would carry the energy harvester, transmitter, and a small microprocessor.

Once the researchers miniaturize the device, they anticipate adding other types of sensors and developing it for applications such as long-term monitoring of vital signs.

“You could have a self-powered pill that would monitor your vital signs from inside for a couple of weeks, and you don’t even have to think about it. It just sits there making measurements and transmitting them to your phone,” Nadeau says.

Such devices could also be used for drug delivery. In this study, the researchers demonstrated that they could use the power generated by the voltaic cell to release drugs encapsulated by a gold film. This could be useful for situations in which doctors need to try out different dosages of a drug, such as medication for controlling blood pressure.

The research was funded by Texas Instruments, the Semiconductor Research Corporation’s Center of Excellence for Energy Efficient Electronics, the Hong Kong Innovation and Technology Commission, the National Institutes of Health, and the Max Planck Research Award.

Timandra Harkness of BBC Radio 4’s FutureProofing series spoke with research affiliate Gio Traverso and postdoc Phillip Nadeau about their ingestible electronic device that uses stomach acid to power tiny sensors. “Once you have the capacity to have a smart system sitting in your stomach that one can communicate with, it opens up the door to homing in on the individual patient,” said Traverso.

Postdoctoral associate Phillip Nadeau speaks with CBC reporter Nora Young about a new ingestible electronic device developed by MIT researchers that could potentially be used to transmit patient data or deliver medications. Young explains that the new device “doesn't require a battery, because it's able to create an electrical current from the acid in your stomach.”

Research affiliate Giovanni Traverso speaks with Ira Flatow of Science Friday about a new ingestible device powered by stomach acid. “When you start thinking about keeping a system inside of the body for a long time,” Traverso explains, “powering that system becomes a challenge, and that’s exactly what we tried to aim to address here with this study.”

MIT researchers have developed a pill that uses stomach acid to run sensors in the body and can deliver drugs over a long period of time, writes Hallie Smith of Boston Magazine. By attaching zinc and copper electrodes to the exterior of the pill it “reacts with stomach acid to create electricity,” explains Smith.

MIT researchers have developed an ingestible device that is powered by stomach acid and can deliver drugs for up to one week, reports Brooks Hays of UPI. "Our work helps pave the way toward a new era of pill-sized electronics, which can operate over the course of weeks or even months in the gastrointestinal tract,” says Giovanni Traverso, a research affiliate at the Koch Institute.