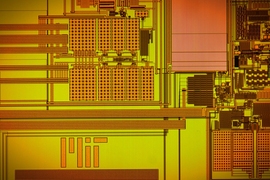 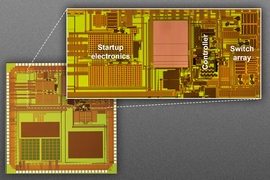 ↓ Download Image
Caption: The MIT researchers' prototype for a chip measuring 3 millimeters by 3 millimeters. The magnified detail shows the chip's main control circuitry, including the startup electronics; the controller that determines whether to charge the battery, power a device, or both; and the array of switches that control current flow to an external inductor coil. This active area measures just 2.2 millimeters by 1.1 millimeters.
Credits: Courtesy of the researchers

Caption:
The MIT researchers' prototype for a chip measuring 3 millimeters by 3 millimeters. The magnified detail shows the chip's main control circuitry, including the startup electronics; the controller that determines whether to charge the battery, power a device, or both; and the array of switches that control current flow to an external inductor coil. This active area measures just 2.2 millimeters by 1.1 millimeters.
Credits:
Courtesy of the researchers

The latest buzz in the information technology industry regards “the Internet of things” — the idea that vehicles, appliances, civil-engineering structures, manufacturing equipment, and even livestock would have their own embedded sensors that report information directly to networked servers, aiding with maintenance and the coordination of tasks.

Realizing that vision, however, will require extremely low-power sensors that can run for months without battery changes — or, even better, that can extract energy from the environment to recharge.

Last week, at the Symposia on VLSI Technology and Circuits, MIT researchers presented a new power converter chip that can harvest more than 80 percent of the energy trickling into it, even at the extremely low power levels characteristic of tiny solar cells. Previous ultralow-power converters that used the same approach had efficiencies of only 40 or 50 percent.

Moreover, the researchers’ chip achieves those efficiency improvements while assuming additional responsibilities. Where most of its ultralow-power predecessors could use a solar cell to either charge a battery or directly power a device, this new chip can do both, and it can power the device directly from the battery.

All of those operations also share a single inductor — the chip’s main electrical component — which saves on circuit board space but increases the circuit complexity even further. Nonetheless, the chip’s power consumption remains low.

“We still want to have battery-charging capability, and we still want to provide a regulated output voltage,” says Dina Reda El-Damak, an MIT graduate student in electrical engineering and computer science and first author on the new paper. “We need to regulate the input to extract the maximum power, and we really want to do all these tasks with inductor sharing and see which operational mode is the best. And we want to do it without compromising the performance, at very limited input power levels — 10 nanowatts to 1 microwatt — for the Internet of things.”

The circuit’s chief function is to regulate the voltages between the solar cell, the battery, and the device the cell is powering. If the battery operates for too long at a voltage that’s either too high or too low, for instance, its chemical reactants break down, and it loses the ability to hold a charge.

To control the current flow across their chip, El-Damak and her advisor, Anantha Chandrakasan, the Joseph F. and Nancy P. Keithley Professor in Electrical Engineering, use an inductor, which is a wire wound into a coil. When a current passes through an inductor, it generates a magnetic field, which in turn resists any change in the current.

Throwing switches in the inductor’s path causes it to alternately charge and discharge, so that the current flowing through it continuously ramps up and then drops back down to zero. Keeping a lid on the current improves the circuit’s efficiency, since the rate at which it dissipates energy as heat is proportional to the square of the current.

Once the current drops to zero, however, the switches in the inductor’s path need to be thrown immediately; otherwise, current could begin to flow through the circuit in the wrong direction, which would drastically diminish its efficiency. The complication is that the rate at which the current rises and falls depends on the voltage generated by the solar cell, which is highly variable. So the timing of the switch throws has to vary, too.

To control the switches’ timing, El-Damak and Chandrakasan use an electrical component called a capacitor, which can store electrical charge. The higher the current, the more rapidly the capacitor fills. When it’s full, the circuit stops charging the inductor.

The rate at which the current drops off, however, depends on the output voltage, whose regulation is the very purpose of the chip. Since that voltage is fixed, the variation in timing has to come from variation in capacitance. El-Damak and Chandrakasan thus equip their chip with a bank of capacitors of different sizes. As the current drops, it charges a subset of those capacitors, whose selection is determined by the solar cell’s voltage. Once again, when the capacitor fills, the switches in the inductor’s path are flipped.

“In this technology space, there’s usually a trend to lower efficiency as the power gets lower, because there’s a fixed amount of energy that’s consumed by doing the work,” says Brett Miwa, who leads a power conversion development project as a fellow at the chip manufacturer Maxim Integrated. “If you’re only coming in with a small amount, it’s hard to get most of it out, because you lose more as a percentage. [El-Damak’s] design is unusually efficient for how low a power level she’s at.”

“One of the things that’s most notable about it is that it’s really a fairly complete system,” he adds. “It’s really kind of a full system-on-a chip for power management. And that makes it a little more complicated, a little bit larger, and a little bit more comprehensive than some of the other designs that might be reported in the literature. So for her to still achieve these high-performance specs in a much more sophisticated system is also noteworthy.”

MIT engineers have developed an ultralow-power circuit that can efficiently harvest energy from solar power, reports Robert Ferris for CNBC. Ferris explains that the circuit “lends itself well to creating self-powering electronic sensors that can be used in a wide range of applications.”