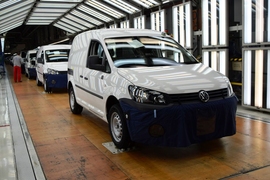 ↓ Download Image
Caption: A production line in a Volkswagen factory in Poland. Scientists at MIT and elsewhere report that the manufacturer’s emissions in excess of the test-stand limit value have had a significant effect on public health not just in Germany but across Europe.

Caption:
A production line in a Volkswagen factory in Poland. Scientists at MIT and elsewhere report that the manufacturer’s emissions in excess of the test-stand limit value have had a significant effect on public health not just in Germany but across Europe.

In September 2015, the German Volkswagen Group, the world’s largest car producer, admitted to having installed “defeat devices” in 11 million diesel cars sold worldwide between 2008 and 2015. The devices were designed to detect and adapt to laboratory tests, making the cars appear to comply with environmental standards when, in fact, they emitted pollutants called nitric oxides, or NOx, at levels that were on average four times the applicable European test-stand limit.

Now the researchers have looked closer to Volkswagen’s home base, examining the health impact from the 2.6 million affected cars sold in Germany under Volkswagen Group’s brands VW, Audi, Skoda, and Seat. In a paper published today in Environmental Research Letters, the team reports that the manufacturer’s emissions in excess of the test-stand limit value have had a significant effect on public health not just in Germany but across Europe.

The researchers estimate that 1,200 people in Europe will die early, each losing as much as a decade of their life, as a result of excess emissions generated between 2008 and 2015 by affected cars sold in Germany. Of these premature deaths, 500 will likely occur in Germany, meaning that more than 60 percent of premature mortalities stemming from those German-sold cars will occur in neighboring countries, most notably Poland, France, and the Czech Republic.

“Air pollution is very much transboundary,” says co-author Steven Barrett, the Leonardo-Finmeccanica Associate Professor of Aeronautics and Astronautics at MIT. “[Pollution] doesn’t care about political boundaries; it just goes straight past. Thus, a car in Germany can easily have significant impacts in neighboring countries, especially in densely populated areas such as the European continent.”

If Volkswagen can recall and retrofit affected vehicles to meet European standards by the end of 2017, this would avert 2,600 additional premature deaths, or 29,000 life years lost, and 4.1 billion Euros in corresponding health costs, which would otherwise be expected in the absence of a recall.

Something in the air

Barrett says that it’s not surprising that Germany, and Europe as a whole, incur higher health impacts from Volkswagen’s excess emissions, as compared to the U.S. Not only were more affected cars sold in Germany (2.6 million) than in the U.S. (482,000), differences in population density, driving behavior, and atmospheric conditions also help explain the aggravated health impacts across Europe.

For instance, Europe’s average population density is about three times higher than the U.S. average, and historical data has shown that diesel cars in Germany are driven on average 20 percent more, in terms of annual mileage, compared to the average American car that was considered in the U.S. study. In other words, there are more affected cars on the road, generating emissions that affect a higher concentration of people.

Atmospheric conditions play a role, as well. NOx is emitted from the engine as a gas, which can be carried by winds over long distances before or while reacting with ammonia in the air to form fine particulates. Since the atmosphere in Europe happens to contain more ammonia than in the U.S., more fine particulates may form from a given amount of NOx. It is exposure to these fine particulates which has been shown to cause cardiopulmonary and respiratory disease. NOx emissions also contribute to the formation of ozone, another pollutant known to be detrimental to human health.

“It takes time for NOx to get converted into particulates, at which point, they could be 100 to 200 kilometers or further away from their source,” Barrett says.

The researchers arrived at their mortality estimates using a method similar to the one they adopted to assess Volkswagen’s health impacts in the U.S. The team based their analysis in part on the German Federal Motor Transport Authority’s measurements of emissions from Volkswagen cars.

They then used historical data on driving behavior in Germany to estimate the number of kilometers driven by each car per year and where drivers were likely to drive the most. From that, the researchers generated a map of excess emissions within Germany.

Barrett and his colleagues worked this emissions map into a simulation of the atmosphere, modeling where the NOx emissions traveled, given prevailing winds, temperature, and precipitation, and where the gas interacted with other compounds to form fine particulates and ozone.

The atmospheric models produced a map of fine particulates and a map of ozone, which the team then overlaid on population density maps across Europe. With these maps, they calculated people’s exposure to Germany-derived excess emissions, for each country in the European Union. From these exposure estimates, the researchers calculated the increased risk of dying early in the population, using a “concentration response function” — a relationship between a person’s exposure to a given dose of a pollutant and the person’s related health risk.

“It ends up being about a one percent extra risk of dying early in a given year, per microgram per meter cubed of fine particles you’re exposed to,” Barrett says. “Typically that means that someone who dies early from air pollution ends up dying about a decade early.”

Overall, the researchers found that 1,200 premature deaths will likely occur as a result of excess emissions that have already been released into the atmosphere between 2008 and 2015. Of these, 500 early deaths occur in Germany, followed by 160 in Poland, 84 in France, and 72 in the Czech Republic, with the remainder split among other European countries.

The researchers performed the same analysis a second time, under a scenario in which Volkswagen fixes affected cars to meet regulatory standards by the end of 2017, generating no excess emissions starting in January 2018. Under this scenario, the company would avert 2,600 premature deaths, or 29,000 years of life lost.

Going forward, the researchers plan to expand their study of auto emissions’ health impact, concentrating on diesel vehicles in Europe.

“It seems unlikely that Volkswagen is the only company with issues with excess emissions,” Barrett says. “We don’t know if other manufacturers have these defeat devices, but there is already evidence that many other vehicles in practice emit more than the applicable test-stand limit value. So we’re trying to do this for all diesel vehicles.”

MIT researchers have estimated that 1,200 people in Europe could die prematurely due to excess emissions from Volkswagen vehicles sold in Germany, reports Steph Yin for The New York Times. Research assistant Guillaume Chossière says that the study demonstrates why manufacturers should make nitrogen oxides emissions “as low as possible by allowing emissions-control devices to work properly.”

MIT researchers have found that pollution from Volkswagen vehicles rigged to pass vehicle emissions standards tests could lead to 1,200 premature deaths in Europe, according to the AFP. The researchers found that the excess pollution “corresponded to about 1.9 billion euros ($2 billion) in health costs and lost labor productivity.”

TIME reporter Charlotte Alter writes that a new study by MIT researchers shows that excess air pollution from Volkswagen vehicles could shorten the lives of thousands of people in Europe. The researchers estimated that “1,200 lives would be shortened because of the increased air pollution.”

MIT researchers have found that excess emissions from Volkswagen vehicles could cause 1,200 premature deaths in Europe, reports Alexander Kaufman for The Huffington Post. “The scientists determined their findings by applying widely accepted epidemiological techniques, gleaned from decades-long studies tracking the effects of exposure to pollution on large populations over time."