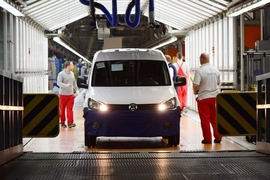 ↓ Download Image
Caption: Workers inspect a car on the production line in a Volkswagen factory in Poznan, Poland.

Caption:
Workers inspect a car on the production line in a Volkswagen factory in Poznan, Poland.

Volkswagen’s use of software to evade emissions standards in more than 482,000 diesel vehicles sold in the U.S. will directly contribute to 60 premature deaths across the country, a new MIT-led study finds.

In September, the Environmental Protection Agency discovered that the German automaker had developed and installed “defeat devices” (actually software) in light-duty diesel vehicles sold between 2008 and 2015. This software was designed to sense when a car was undergoing an emissions test, and only then engage the vehicle’s full emissions-control system, which would otherwise be disabled under normal driving conditions — a cheat that allows the vehicles to emit 40 times more emissions than permitted by the Clean Air Act.

That amount of excess pollution, multiplied by the number of affected vehicles sold in the U.S. and extrapolated over population distributions and health risk factors across the country, will have significant effects on public health, the study finds.

According to the study, conducted by researchers at MIT and Harvard University and published in the journal Environmental Research Letters, excess emissions from Volkswagen’s defeat devices will cause around 60 people in the U.S. to die 10 to 20 years prematurely. If the automaker recalls every affected vehicle by the end of 2016, more than 130 additional early deaths may be avoided. If, however, Volkswagen does not order a recall in the U.S., the excess emissions, compounding in the future, will cause 140 people to die early.

In addition to the increase in premature deaths, the researchers estimate that Volkswagen’s excess emissions will contribute directly to 31 cases of chronic bronchitis and 34 hospital admissions involving respiratory and cardiac conditions. They calculate that individuals will experience about 120,000 minor restricted activity days, including work absences, and about 210,000 lower-respiratory symptom days.

In total, Volkswagen’s excess emissions will generate $450 million in health expenses and other social costs, the study projects. But a total vehicle recall by the end of 2016 may save up to $840 million in further health and social costs.

Steven Barrett, the lead author of the paper and an associate professor of aeronautics and astronautics at MIT, says the new data may help regulatory officials better estimate the effects of Volkswagen’s actions.

“It seemed to be an important issue in which we could bring to bear impartial information to help quantify the human implications of the Volkswagen emissions issue,” Barrett says. “The main motivation is to inform the public and inform the developing regulatory situation.”

To estimate the health effects of Volkswagen’s excess emissions, Barrett and his colleagues at MIT and Harvard based their calculations on measurements by researchers at West Virginia University, who found that the vehicles produced up to 40 times the emissions allowed by law. They then calculated the average amount that each vehicle would be driven over its lifetime, and combined these results with sales data between 2008 and 2015 to estimate of the total excess emissions during this period.

The group then calculated the resulting emissions under three scenarios: the current scenario, in which 482,000 vehicles have already emitted excess emissions into the atmosphere; a scenario in which Volkswagen recalls every affected vehicle by the end of 2016; and a future in which there is no recall, and every affected vehicle remains on the road, continuing to emit excess pollution over the course of its lifetime.

The group then estimated the health effects under each emissions scenario, using a method they developed to map emissions estimates to public exposure to fine particulate matter and ozone. Diesel vehicles emit nitrogen oxides, which react in the atmosphere to form fine particulate matter and ozone. Barrett’s approach essentially maps emissions estimates to population health risk, accounting for atmospheric transport and chemistry of the pollutants.

“We all have risk factors in our lives, and [excess emissions] is another small risk factor,” Barrett explains. “If you take into account the additional risk due to the excess Volkswagen emissions, then roughly 60 people have died or will die early, and on average, a decade or more early.”

Barrett says that, per kilometer driven, this number is about 20 percent of the number of deaths caused by road transport accidents.

Daniel Kammen, the editor-in-chief of Environmental Research Letters and a professor of energy at the University of California at Berkeley, says the group’s study provides a “rigorous evaluation of the scale of the impacts, which are potentially exceedingly serious.

“The analysis demonstrates the value of policy-inspired fundamental research where the air quality and health impacts of transgressions such as the VW issue can be calculated, and made available for public discussion,” says Kammen, who did not contribute to the research.

In an article for The Wall Street Journal, Jo Craven McGinty highlights a study by researchers from MIT and Harvard that calculated the damage caused by Volkwagen cheating on emissions standards tests. “We estimated the vehicles affected were driven 40.5 billion kilometers from 2008,” explains Prof. Steven Barrett.

A new study by researchers from MIT and Harvard shows that pollution from Volkswagen vehicles could lead to premature deaths in the U.S., reports Tom Randall for Bloomberg News. “Volkswagen's deception allowed some 482,000 U.S. diesel cars to pass emissions tests even as they polluted as much as 40 times the legal limit,” writes Randall.

Wired reporter Sarah Zhang reports on how MIT researchers developed a new computer model that they used to examine the public health impacts of Volkswagen cheating on emissions standards tests. Zhang explains that the researchers’ model “allows scientists to estimate the impact of extra NOx in any 50 km by 50 km square of the world.”

Nina Godlewski writes for Boston.com that a new study co-authored by MIT researchers found that approximately 60 people in the U.S. will die prematurely due to Volkswagen’s cheating on emissions tests. Godlewski explains that, “if the automaker fails to recall all of the affected vehicles by the end of 2016, more deaths may occur.”

Alexandra Ossola reports for Popular Science that MIT researchers have determined that by cheating on emissions tests, Volkswagen could cause 60 premature deaths in the U.S. “The researchers estimated the impact on public health…by calculating the effects of more fine particulates, ozone, and nitrous oxide,” writes Ossola.

CNBC reporter Robert Ferris writes about a study by researchers from MIT and Harvard that examines the impacts of Volkswagen cheating on emissions tests. “Volkswagen's cars have emitted 40 times the amount of noxious nitrogen oxide (NOx) than the limit proscribed by the U.S. Environmental Protection Agency,” Ferris explains.

Atlantic reporter Robinson Meyer speaks with Prof. Steven Barrett about his research showing that 140 people will die prematurely if Volkswagen vehicles outfitted with emissions-cheating devices are not recalled. Barrett says that if the cars are returned, “most of those 140 deaths would be averted.”

Researchers at MIT and Harvard have determined that emissions resulting from Volkswagen’s rigged inspections will cause 60 premature deaths in the U.S., reports Robert Preidt for U.S. News & World Report. The researchers found that “if VW recalls every affected vehicle by the end of 2016, more than 130 additional deaths may be prevented,” writes Preidt.

Shifting up to higher octane

A link between air travel and deaths on the ground