A link between air travel and deaths on the ground 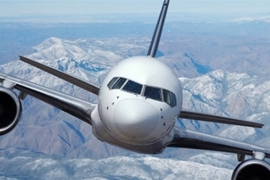 Credits:
Graphic: Christine Daniloff
The atmosphere is full of natural and man-made chemicals, including emissions from fuel combustion and byproducts of living organisms. Many of these chemicals combine in the atmosphere to form tiny solid and liquid particles known as “fine particulate matter” that are 2.5 micrometers or smaller (the average human hair is about 70 micrometers in diameter, by comparison). While it’s not clear whether all of these particles may be harmful, some are; the danger to humans comes when they are inhaled and trapped in the lungs, where they can then enter the bloodstream.

In 2004, the World Health Organization estimated that about one million deaths per year are caused by air pollution, and several epidemiological studies have linked air pollution to the development of cardiovascular and respiratory illnesses, including lung cancer. Those studies tracked thousands of adults over many years to measure their exposure to air pollution while monitoring their health. Once the data were statistically analyzed to correct for other risk factors like smoking, the results indicated that increased exposure to fine particulate matter caused by air pollution is linked to health problems like chronic bronchitis and decreased lung function, as well as premature death.

Aviation emissions contribute to this health problem, according to a new study that suggests that airplanes flying at a cruise altitude of around 35,000 feet emit pollutants that contribute to about 8,000 deaths per year globally. The research, reported online this month in the journal Environmental Science and Technology, provides the first estimate of premature deaths attributable to aircraft emissions at cruise altitudes. Aircraft emit nitrogen oxides (NOx) and sulfur oxides (SOx), which react with gases already existing in the atmosphere to form harmful fine particulate matter.

Current worldwide regulations target aircraft emissions only up to 3,000 feet. That’s because regulators have assumed that anything emitted above 3,000 feet would be deposited into a part of the atmosphere that has significantly smoother air, meaning pollutants wouldn’t be affected by turbulent air that could mix them toward the ground. Thus, even though 90 percent of aircraft fuel is burned at cruise altitudes, only those pollutants that are emitted during takeoff and landing are regulated by measuring emissions during tests of newly manufactured engines in simulated takeoff and landing conditions.

To study the effects of cruise emissions, Barrett used a computer model that combined data about plane trajectories, the amount of fuel burned during flights and the estimated emissions from those flights. He combined that with a global atmospheric model that accounts for air-circulation patterns in different parts of the globe and the effect of emissions to determine where aviation emissions might cause an increase in fine particulate matter. He then used data related to population density and risk of disease in different parts of the world to determine how the change in particulate matter over certain regions might affect people on the ground — specifically, whether the air pollutants would lead to an increased risk of death.

Analysis of these data revealed that aircraft pollution above North America and Europe — where air travel is heaviest — adversely impacts air quality in India and China. That is, even though the amount of fuel burned by aircraft over India and China accounts for only 10 percent of the estimated total amount of fuel burned by aircraft across the globe, the two countries incur nearly half — about 3,500 — of the annual deaths related to aircraft cruise emissions. The analysis also revealed that although every country in the Northern Hemisphere experienced some number of fatalities related to these emissions, almost none of the countries in the Southern Hemisphere had fatalities.

That’s because the majority of air traffic occurs in the Northern Hemisphere, where planes emit pollutants at altitudes where high-speed winds flowing eastward, such as the jet stream, spread emissions to other continents, according to the study. Part of the reason for the high percentage of premature deaths in India and China is that these regions are densely populated and also have high concentrations of ammonia in their atmosphere as a result of farming. This ammonia reacts with oxidized NOx and SOx to create fine particulate matter that people inhale on the ground. Although agriculture is abundant in Europe and North America, the ammonia levels aren’t as elevated above those regions.

Funded by the UK Research Councils with help from the U.S. Department of Transportation, the study recommends that cruise emissions be “explicitly considered” by international policymakers who regulate aviation engines and fuels. Steve Lott, a spokesman for the International Air Transport Association, a trade group that represents 230 airlines, says that aviation is “a small part of a big problem,” particularly when compared to other transportation sources of emissions, such as those caused by shipping, which a 2007 study linked to 60,000 premature deaths per year.

Lourdes Maurice, the chief scientific and technical adviser for environment at the Federal Aviation Administration, says that if the agency can confirm Barrett’s findings through additional research, then it will work with the Environmental Protection Agency and the International Civil Aviation Organization to consider appropriate regulatory action. The FAA will continue to fund research to address uncertainties highlighted by Barrett’s work, she adds.

Barrett concedes that there are many uncertainties, including how accurately the model reflects how air travels vertically from high altitudes to low altitudes. To address this, he is collaborating with researchers at Harvard to study an isotope of the element beryllium that is produced naturally at high altitudes and attaches to atmospheric particles that eventually reach the ground through air or rain. Researchers have a general idea of how much beryllium is concentrated in the atmosphere, and Barrett and his colleagues are currently analyzing ground measurements of the element to quantify the extent to which his model “gets vertical transport right.”

Barrett is a member of the Partnership for AiR Transportation Noise and Emissions Reduction (PARTNER), a cooperative research organization that completed the study. Sponsored by the FAA, NASA and Transport Canada, PARTNER has its operational headquarters at MIT.