Shifting up to higher octane 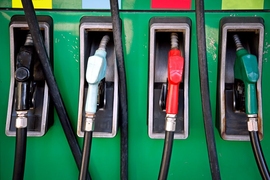 If the majority of light-duty vehicles in the United States ran on higher-octane gasoline, the automotive industry as a whole would reduce its carbon dioxide emissions by 35 million tons per year, saving up to $6 billion in fuel costs, according to a new analysis by MIT researchers.

In a study published in the journal Environmental Science & Technology, the team considered a scenario in which fuel is manufactured under a redefined octane rating — the measure of a gasoline’s ability to resist engine knocking during combustion.

Currently in the United States, a car’s octane rating is based on the antiknock index (AKI) — a specification for fuel composition that is determined by a standard research octane number (RON) and a motor octane number (MON). The resulting octane ratings for today’s car engines typically range from 87 (regular fuel) to 93 (premium, or high-octane, fuel) — numbers that are commonly displayed at the pump. The higher the octane rating, the more resistant the fuel is to knocking.

However, the MIT researchers deemed AKI — and more specifically, MON — to be an outdated measure of engine performance, originally designed to apply to older, carbureted engines rather than modern, fuel-injected engines. To bring the octane rating system up to date, the team considered doing away with MON, and basing engine performance solely on RON.

The revised octane rating system would boost the fuel grade of regular gasoline to 93, and premium to 98. The researchers reasoned that the higher fuel grades, while still appropriate for use in today’s engines, could also give oil refiners the opportunity to produce higher-octane fuel, which in turn could spur manufacturers to design vehicles to run on higher-octane — an innovation that could lead to more efficient vehicles.

“The efficiency of gasoline engines depends on the octane number, but that’s not something that’s changed in quite a while,” says Raymond Speth, a research scientist in MIT’s Department of Aeronautics and Astronautics. “If [manufacturers] know the gasoline is higher-octane, they can design engines to have a higher compression ratio, which would make the engine smaller and more efficient, both of which are a benefit.”

To explore the economic and environmental consequences of a higher-octane fleet, Speth and his colleagues first modeled a vehicle fleet transition from regular to higher-octane gasoline. The team factored in a policy-decision period of about three years to put in place a revised octane rating system, and an additional three to five years for manufacturers to redesign engines to meet the new standards. Based on these constraints, the researchers estimate that by 2040, 80 percent of light-duty vehicles in the U.S. would transition to higher-octane fuel.

The researchers estimated the environmental and economic cost of such a scenario by running simulations of the oil-refining process and vehicle performance, and performing a life-cycle analysis of the resulting carbon dioxide emissions.

The team found that vehicles running on higher-octane fuel would be more efficient, consuming 3 to 4.5 percent less gasoline, for a projected savings of up to $6.4 billion per year by 2040.

Based on its oil-refinery modeling, the group found that producing higher-octane fuel would increase an oil refinery’s emissions by 6 percent — an increase that is minor when compared with the balance of emissions from fuel production. When assessing the emissions produced by everything from extracting crude oil to transporting it to refineries and burning it in car engines, the team found that a higher-octane vehicle fleet would reduce overall carbon dioxide emissions by 35 million tons per year — a decrease that stems mostly from more-efficient engines.

“Overall, you’re decreasing carbon dioxide emissions by 3 to 4 percent, at negative cost,” says Steven Barrett, an associate professor of aeronautics and astronautics, and co-author of the paper. “It’s one of the few things you can do to decrease carbon dioxide, while at the same time saving money.”

In sum, the researchers found that redefining the octane rating system in the U.S. to encourage higher-octane consumption would have both economic and environmental benefits. To change the system, however, will require consensus from multiple parties.

“It’s an issue that has a lot of stakeholders that will have to agree,” Speth says. “When you have this evidence that there’s this real economic benefit, hopefully you can say, ‘Look, there are pieces of the pie that can be divvied up to provide a benefit to almost everyone involved: the refineries, the vehicle manufacturers, and the consumers.’”

The paper’s co-authors include John Heywood, William Green, Eric Chow, and Robert Malina. The research was sponsored through the BP-MIT Conversion Program.

The case of the missing gas tax