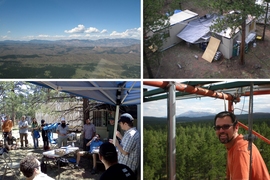 ↓ Download Image
Caption: “The goal was trying to understand the chemistry associated with organic particulate matter in a forested environment,” associate professor Jesse Kroll explains. “We took a lot of measurements using state-of-the-art instruments we had developed.” The team also took many photos while in Colorado. Pictured on the bottom right is Douglas Day, CU researcher and organizer of the field campaign.

Caption:
“The goal was trying to understand the chemistry associated with organic particulate matter in a forested environment,” associate professor Jesse Kroll explains. “We took a lot of measurements using state-of-the-art instruments we had developed.” The team also took many photos while in Colorado. Pictured on the bottom right is Douglas Day, CU researcher and organizer of the field campaign.

For a few weeks over the summer in 2011, teams of scientists from around the world converged on a small patch of ponderosa pine forest in Colorado to carry out one of the most detailed, extended survey of atmospheric chemistry ever attempted in one place, in many cases using new measurement devices created especially for this project. Now, after years of analysis, their comprehensive synthesis of the findings have been released this week.

The teams, which included a group from MIT using a newly-developed device to identify and quantify compounds of carbon, reported their combined results in a paper in the journal Nature Geoscience. Jesse Kroll, MIT associate professor of civil and environmental engineering and of chemical engineering, and James Hunter, an MIT technical instructor in the Department of Materials Science and Engineering who was a doctoral student in Kroll’s group at the time of the research, were senior author and lead author, respectively, of the 24 contributors to the report. Associate Professor Colette Heald of the Department of Civil and Environmental Engineering and the Department of Earth, Atmospheric and Planetary Sciences was also a co-author.

The organic (carbon-containing) compounds they studied in that patch of Colorado forest play a key role in atmospheric chemical processes that can affect air quality, the health of the ecosystem, and the climate itself. Yet many of these processes remain poorly understood in their real-world complexity, and they had never been so rigorously sampled, studied, and quantified in one place before.

“The goal was trying to understand the chemistry associated with organic particulate matter in a forested environment,” Kroll explains. “The various groups took a lot of different measurements using state-of-the-art instruments we each had developed.” In doing so, they were able to fill in significant gaps in the inventory of organic compounds in the atmosphere, finding that about a third of them were in the form of previously unmeasured semi-volatile and intermediate-volatility organic compounds (SVOCs and IVOCs).

“We’ve long suspected there were gaps in our measurements of carbon in the atmosphere,” Kroll says. “There seemed to be more aerosols than we can explain by measuring their precursors.”

The MIT team, as well as some of the other research groups, developed instruments that specifically targeted these hard-to-measure compounds, which Kroll describes as “still in the gas phase, but sticky.” Their stickiness makes it hard to get them through an inlet into a measuring device, but these compounds may play a significant role in the formation and alteration of aerosols, tiny airborne particles that can contribute to smog or to the nucleation of raindrops or ice crystals, affecting the Earth’s climate.

“Some of these instruments were used for the first time in this campaign,” Kroll says. When analyzing the results, which provided unprecedented measurements of the SVOCs and IVOCs, “we realized we had this data set that provided much more information on organic compounds than we ever had before. By bringing the data from all these instruments together into one combined dataset, we were able to describe the organic compounds in the atmosphere in a more comprehensive way than had ever been possible, to figure out what’s really going on.”

It’s a more complicated challenge than it might seem, the researchers point out. A very large number of different organic compounds are constantly being emitted by trees and other vegetation, which vary in their chemical composition, their physical properties, and their ability to react chemically with other compounds. As soon as they enter the air many of the compounds begin to oxidize, which exponentially increases their number and diversity.

The collaborative campaign to characterize the quantities and reactions of these different compounds took place in a section of the Manitou Experimental Forest Observatory in the Rocky Mountains of Colorado. Five different instruments were used to collect the data on organic compounds, and three of those had never been used before.

Despite the progress, much remains to be done, the researchers say. While the field measurements provided a detailed profile of the amounts of different compounds over time, it could not identify the specific reactions and pathways that were transforming one set of compounds to another. That kind of analysis requires the direct study of the reactions in a controlled laboratory setting, and that kind of work is ongoing, in Kroll’s MIT lab and elsewhere.

Filling in all these details will make it possible to refine the accuracy of atmospheric models and help to assess such things as strategies to mitigate specific air pollution issues, from ozone to particulate matter, or to assess the sources and removal mechanisms of atmospheric components that affect Earth’s climate.

Zeroing in on the chemistry of the air