Zeroing in on the chemistry of the air 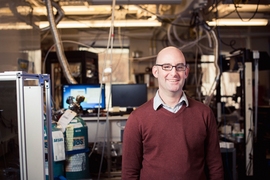 ↓ Download Image
Caption: “The ultimate objective,” atmospheric scientist Jesse Kroll says, “is to understand what policies could help, and what changes policymakers could make to minimize the negative health and climate effects of particulate pollution.” 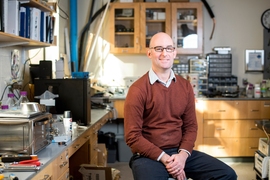 ↓ Download Image
Caption: “The ultimate objective,” atmospheric scientist Jesse Kroll says, “is to understand what policies could help, and what changes policymakers could make to minimize the negative health and climate effects of particulate pollution.”

Caption:
“The ultimate objective,” atmospheric scientist Jesse Kroll says, “is to understand what policies could help, and what changes policymakers could make to minimize the negative health and climate effects of particulate pollution.”

We breathe it in and out every few seconds, yet the air that surrounds us has chemical activity and variations in its composition that are remarkably complex. Teasing out the mysterious behavior of the atmosphere’s constituents, including pollutants that may be present in tiny amounts but have big impacts, has been the driving goal of Jesse Kroll’s research.

Kroll, an associate professor of civil and environmental engineering and of chemical engineering who earned tenure last year, has been especially focused on studying the role of organic compounds in the air. These carbon-containing compounds include natural emissions from plants as well as products of combustion — everything from gaseous emissions that come from fuel burning in internal combustion engines, to components of soot and other particulate matter that arise from forest fires and other open flames. Such particles are smaller than a micron in diameter but can have outsized environmental effects.

“If you inhale them, they can cause adverse health effects, and they also can affect the Earth’s climate by affecting the amount of sunlight that comes through,” Kroll says.

However, a large fraction of organic particulate matter is not directly emitted into the atmosphere, but instead is formed within the atmosphere from oxidation reactions of gaseous organic species. Understanding such chemical transformations and their effects on atmospheric composition is a daunting task.

“It’s not just that there are a lot of different compounds,” Kroll explains. “Once in the atmosphere, they oxidize, and each one can form 10 or 100 more chemical products, which in turn can form many others. It’s a deeply complex system, so from a chemist’s perspective, it’s a really fascinating field.”

Analyzing these processes requires both detailed sampling and testing out in the field, and complex laboratory experiments that reveal the sequence of changes these chemicals go through once they enter the atmosphere.

Kroll originally hails from Austin, Texas, where his father was a professor of archaeology and classics at the University of Texas. He started to develop an interest in chemistry while in high school. “I figured out that chemistry was really something that grabbed me, because it could be related to something very tangible in the real world,” he recalls.

He moved to the Boston area for college, where he completed his undergraduate studies at Harvard University, majoring in chemistry and earth and planetary sciences. In a freshman environmental chemistry class, he says, “I got to study environmental chemistry, and I knew that was something that I wanted to work on. It was complex but tractable.” He went on to earn his PhD in chemistry there and then moved on to a postdoc position at Caltech, where he spent three years.

Next he moved into industry, taking a job at Aerodyne Research in Billerica, Massachusetts, where he worked on developing instruments for measuring atmospheric chemistry — some of which he still uses in his research. Then, in 2009, he joined the MIT faculty.

He says that with organic aerosols in the atmosphere, “there are so many different reactions and so many different molecules involved, we can’t hope to measure them all.” In addition, the mix of chemicals varies greatly from one region to another. So part of the challenge for atmospheric chemists is to decide how to narrow the problem and which compounds to focus on as being most relevant to both health and environmental effects.

“We try to strike a balance between having an accurate-enough description of this chemistry, but in a simple enough form to be useful for modelers and ultimately policymakers,” he says.

Most of Kroll’s work is in the laboratory, where individual chemical compounds can be introduced into reactors, varying from small flow tubes to sealed chambers the size of a small room, and oxidized under controlled conditions. He and his team then withdraw samples in real-time from those reactors, to make precise measurements of the evolving chemistry within.

But it’s not all local lab work. Kroll and his students also participate in large, multi-institution field studies, including ground-based atmospheric measurements in California, Alabama, and Colorado, and large-scale lab projects such as a recent one carried out the U.S. Department of Agriculture’s Missoula Fire Lab in Montana. There, inside a large controlled environment, researchers burnt various types of biomass to simulate wildfires, and then measured what came off. “We brought those emissions into a reactor we built, to simulate the aging of biomass burning plumes,” Kroll says.

One of his classes (Traveling Research Environmental Experiences, or TREX) also focuses on fieldwork. Every January during MIT’s Independent Activities Period, he co-leads a group of undergraduates to carry out air quality studies in Hawaii, monitoring the emissions and evolution of sulfur-containing gases emitted from the Kilauea volcano.

Part of all this effort aims to improve the detailed atmospheric models that are used to predict the progress of Earth’s changing climate and the factors affecting it. “There are large and persistent gaps between what models predict and what people measure,” in terms of the details of chemical interactions in the air, and even the amounts and compositions of these organic particles, he says, so it’s important to keep plugging away at understanding and reducing those discrepancies.

“The ultimate objective,” he says, “is to understand what policies could help, and what changes policymakers could make to minimize the negative health and climate effects of particulate pollution.”