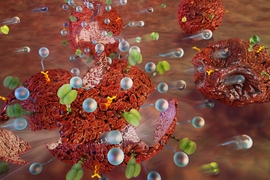 ↓ Download Image
Caption: By tethering hundreds of tiny particles to the surfaces of tumor cells in the presence of a mechanical force, an MIT team made the cells much more vulnerable to attack by a drug that triggers cancer cells to commit suicide. 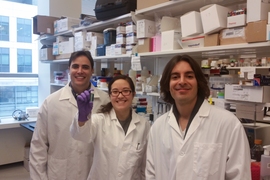 Caption:
By tethering hundreds of tiny particles to the surfaces of tumor cells in the presence of a mechanical force, an MIT team made the cells much more vulnerable to attack by a drug that triggers cancer cells to commit suicide.

MIT researchers have devised a way to make tumor cells more susceptible to certain types of cancer treatment by coating the cells with nanoparticles before delivering drugs.

By tethering hundreds of tiny particles to the surfaces of tumor cells in the presence of a mechanical force, the researchers made the cells much more vulnerable to attack by a drug that triggers cancer cells to commit suicide. It appears that the tethered nanoparticles increase the forces exerted on the cells by flowing blood, which makes the cells more likely to die.

“When you attach many particles to the membranes of these cells, and then expose them to forces that mimic those in the human body, like blood flow, these therapeutics become more effective. It’s a way of amplifying the forces on the cells using polymeric materials,” says Michael Mitchell, a postdoc at MIT’s Koch Institute for Integrative Cancer Research and the lead author of the study.

In tests in mice, the researchers found that the tethered nanoparticles made the cell-suicide-inducing drug 50 percent more effective, and this combination eliminated up to 90 percent of tumor cells in the mice.

Robert Langer, the David H. Koch Institute Professor at MIT, is the senior author of the paper, which appears in the March 20 issue of Nature Communications.

In addition to studying tumors’ abnormal genetic and biochemical traits, scientists and engineers in recent years have examined how tumors’ physical characteristics contribute to disease progression. Solid tumors exploit physical forces, such as their increased stiffness and altered blood flow, to enhance their survival and growth. Forces exerted by flowing blood and fluid in soft tissues also affect the behavior of cancer and a variety of host cells.

In the new study, the MIT team set out to determine whether physical forces such as those exerted by blood flow might influence how tumors respond to drug treatment. They focused on an experimental drug known as TRAIL, which is a protein expressed on different cells of the immune system. TRAIL is a member of a family of tumor necrosis factors that bind to death receptors on cell membranes, sending them a signal that stimulates apoptosis, or programmed cell death.

Initial experiments revealed that tumor cells became more susceptible to this drug after being exposed to shear forces from physiological fluids. “Under these flow conditions, more tumor cells began to die in the presence of the therapeutic,” Mitchell says.

That led the researchers to hypothesize that they could make cells even more susceptible to the treatment by increasing the forces acting on them. One way to do that is to attach tiny particles to the cell surfaces. Acting like balls on a string, the tethered particles batter and tug at the tumor cell surface as blood flows by, making the cells more susceptible to the cell death signal from the drug.

The particles, which can be injected into the bloodstream, are made of biodegradable polymers known as PLGA. These particles are coated with another polymer, PEG, that is tagged with a ligand or antibody specific to proteins found on tumor cell surfaces, which allows them to be tethered onto the surface.

In tests in mice, the researchers found that attaching particles to tumor cells and then treating them with TRAIL killed metastatic tumor cells in the bloodstream and also reduced the progression of solid tumors in mice. The researchers tested particles ranging from 100 nanometers to 1 micrometer and found that the largest ones were more effective. Also, as greater numbers of particles were tethered to the surface, more cells died.

The effect of the treatment appears to be specific to tumor cells and does not induce apoptosis in healthy cells, the researchers say.

Michael King, a professor of biomedical engineering at Cornell University who was not involved in the research, described the approach as very creative.

“I’ve never seen another study where anyone tried to use particles attached to the cell surfaces to mechanically amplify the cells’ drug sensitivity,” says King, adding that this approach may also be applicable to other drugs.

The researchers believe that the particles may enhance TRAIL’s effects by compressing the shroud of molecules that usually surrounds tumor cells, making it easier for the drug to interact with receptors on the cell surface that turn on the cell death pathway.

“When you expose cells to forces and then these particles are coming down on the cell, they could be flattening all these molecules on the surface. Then the receptor can come in better contact with TRAIL to induce tumor cell death,” Mitchell says.

The MIT team is now exploring the possibility of using this approach in combination with other drugs that stimulate an immune response, such as drugs that induce a “cytokine storm” — a large release of signaling chemicals that attracts many immune cells to the site to destroy the tumor.

“We’re very interested in combined approaches where you can hit tumor cells with many immune-based therapies and then exploit physical forces that these cells are exposed to, as a new way to kill them,” Mitchell says.

The research was funded by a Burroughs Wellcome Fund Career Award at the Scientific Interface, a Ruth L. Kirschstein National Research Service Award, and the National Institutes of Health.